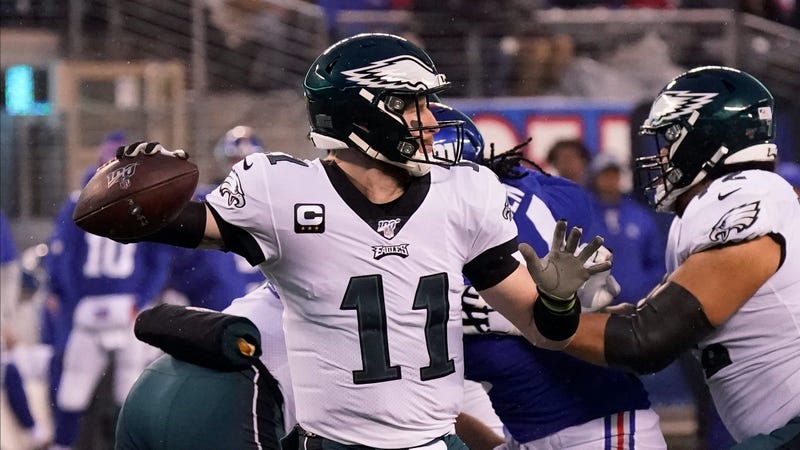 With the regular season now over, however, the Eagles have found a way to keep playing.

The Eagles are 2019 NFC East champions after their 27-17 win over the New York Giants on Sunday, a win that clinched the division with a 9-7 record.

The win looked like almost every win has this season — ugly, tense and filled with injuries, but it was without question the sweetest of the season. Now, the Eagles will host a playoff game next weekend against either the San Francisco 49ers or Seattle Seahawks.

Here are some takeaways from the big win:

Carson Wentz: Wentz might not have made any of the big highlight plays, but make no mistake about it — in a rain-filled stadium and the players around him dropping like flies, he played a great game.

After the Giants tied the game up 3-3, Wentz took the offense right down the field in eight plays to take the lead back. Wentz had two crucial back-to-back plays, starting with a quarterback sneak on 4th-and-1 from the Giants’ 25-yard line to get a fresh set of downs. Then, on the next play, Wentz displayed great arm strength for the first touchdown of the game, hitting tight end Joshua Perkins for a 24-yard score that required him to throw it across the field in the pouring rain.

Wentz continued to show off his arm strength in the second half, when he made back-to-back accurate throws down the field for big gains. The first one was negated by a holding penalty, but the second — with just over 14-minutes to play in the game — resulted in a 41-yard completion to receiver Deontay Burnett. The pass was the biggest play in a field goal drive that gave them a 20-17 lead.

With the win on Sunday, Wentz has now played the biggest role in what will be remembered a great, late-season stretch by this team to clinch the division. Wherever this season ends, the fact it is ending in the playoffs with Wentz leading the charge is huge for this franchise going forward.

Fletcher Cox and Malcolm Jenkins: Was the defense perfect? No. But in a game they had to have, on the road, they turned in maybe their best effort of the season. The defense held the Giants to 17 points, but also made one of the biggest plays of the game when safety Malcolm Jenkins forced a fumble with just over 13 minutes to play in the game. The forced fumble by Jenkins bounced off of the knee of quarterback Daniel Jones and went bouncing back towards the goal line, which defensive tackle Fletcher Cox recovered on the two-yard line.

On the next play, running back Boston Scott ran it in to give the Eagles a 27-17 lead.

Boston Scott: When Scott fumbled the opening kickoff, it felt like a bad omen.

Instead, Scott made some of the biggest plays of the game.

First, Scott pulled in a one-handed, 29-yard catch midway through the second quarter that helped to set up a crucial touchdown. Then, Scott scored a touchdown with just over two minutes to play in the third quarter, giving the Eagles a 17-10 lead. Next, with the Eagles holding a 20-17 lead, Scott ran it in from two-yards out to give them a 27-17 lead at the start of the fourth quarter.

Finally, with the Eagles pulling away, Scott put the nail in the coffin with a 39-yard reception that he followed up with a two-yard touchdown to give the Eagles a 34-17 lead.

In a game where Miles Sanders was in the locker room with an ankle injury and Jordan Howard played just one snap, Scott stepped up and helped the Eagles clinch the division.

Dallas Goedert: In his first game as the starting tight end for the team, Goedert came up big.  The second-year tight end made an amazing catch on 3rd-and-8 from the Giants 36-yard line, pulling it in over his shoulder along the sideline while also keeping his feet in bounds. The catch was a huge one, as three plays later the Eagles got in the end zone to take a 17-10 lead.

Rasul Douglas: Douglas got the start with both Ronald Darby and Jalen Mills sidelined. The Giants went after him from the start, making a clear effort to target him as much as possible. Douglas held up well for most of the first half, but the Giants finally broke through on the first drive of the third quarter, when receive Golden Tate out jumped Douglas in the back of the end zone for the touchdown.

Cre’Von LeBlanc: Made a really nice play on the Giants’ opening drive of the game, batting away a 3rd-and-seven pass to force a punt. On 4th-and-4 with just over five minutes to go in the third quarter, and the Giants driving, LeBlanc knocked away a Jones pass to force the incompletion. The breakup was huge, as it killed what looked like was going to be a touchdown drive, and got the Eagles the ball back tied 10-10. Finally, in the fourth quarter, LeBlanc stepped up on fourth-down in the backfield to stop Saquon Barkley.

Brandon Brooks: The Eagles’ starting right guard left the game with just under two minutes to play in the second quarter after suffering a shoulder injury on an extra point. Brooks was carted off, but only after nearly the entire roster came onto the field to see him. He did not return to the game, and with Brooks in the locker room, the Eagles put Matt Pryor in at guard.

Miles Sanders: The Eagles’ lost arguably their most dynamic offensive player with just under eight minutes to play in the second quarter. Sanders was having a great start to the game, totaling 50 total yards when he left on 11 touches. It looked like he suffered the injury at the end of a four-yard run in the first quarter. Sanders did not return, and his status for next week is now one of the main things for fans to keep an eye on this week.