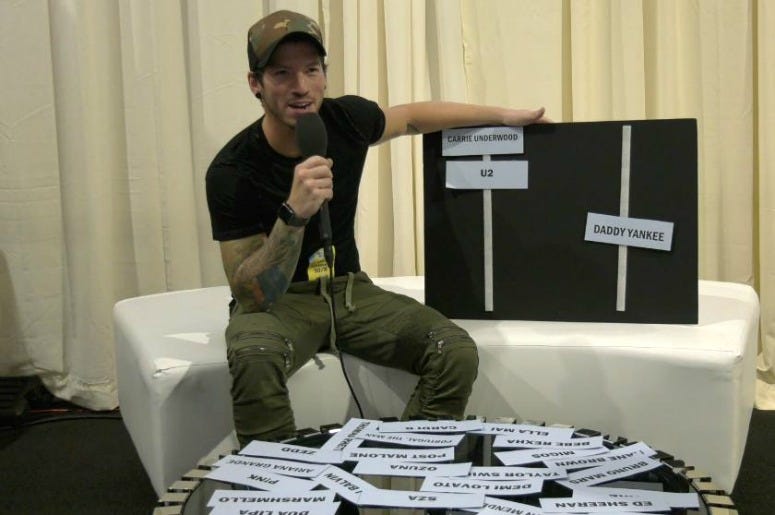 Twenty One Pilots are set to perform a song off their brand new album Trench on Tuesday night at the 2018 American Music Awards, but first we asked drummer Josh Dun to help us fulfill a rock n' roll fantasy.

The mission was near impossible, but Dun was up to the challenge. Help us build the ultimate AMAs Super Group.

Using only the essentials, like Velcro and laminated paper, Josh helped us make the ultimate band filled with American Music Awards nominees. "I'm gonna be part of this band too" said Josh. "And the other guy in my band, Tyler, I'm gonna make him be in it too, because I can't go on stage without him."

We gave Dun a pile of nominees, and this is the masterpiece he created.

"Think about that. Think about how that's gonna sound and look, and then it's gonna look way different" explained Josh of his Super Group.

As much as we would love to see Twenty One Pilots team up with Carrie Underwood, we think this dream team is still a ways away from become a reality. However, in the meantime, both Underwood and the "Jumpsuit" singers will take the stage to perform at the AMAs. They will be joined by Mariah Carey, Camila Cabello, Panic! At The Disco, Taylor Swift, and many more.

Stay tuned, because you never know who might show up on the AMAs stage. Maybe even "Daddy Yankee And Friends."

The 2018 AMAs will air live from the Microsoft Theater in Los Angeles Tuesday, October 9 at 8 p.m. ET on ABC.