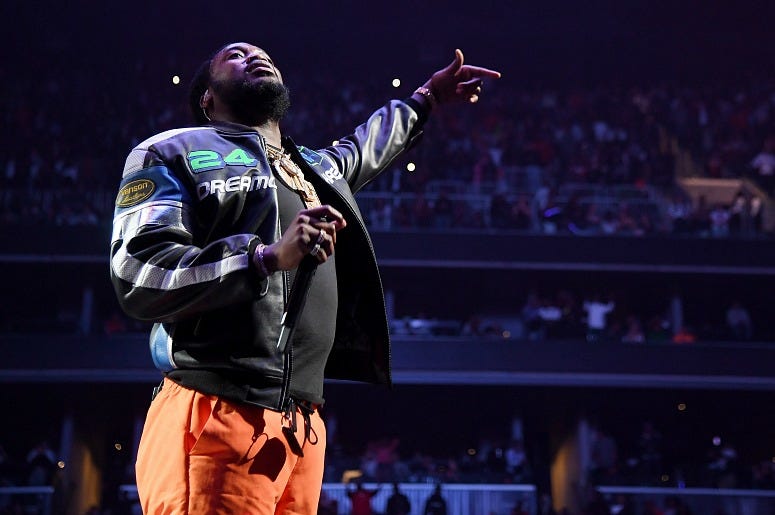 Meek Mill has become something that was almost impossible to predict a few short years ago. He's now an advocate for prison reform, a close associate of Jay Z, and collaborator with Drake. To say that the road has been long for Meek to get to his latest album would be an understatement.

After the #FreeMeekMill movement and the rapper's transformation in cause célèbre, the perfect ending to the script would be a successful return to music. On Championships he achieves it, celebrating his own return while turning an eye toward the adjacent cultural issues around his own story, and offering a rebuttal to the system and the people that put him in prison.

Much will be made about the artists that are along for the ride on Championships, which are noteworthy, but the headline should be the sharpened skills of Meek Mill. He has managed to inject more urgency and energy into his already frenetic flow, sounding shot out of a cannon here, flexing some well-earned grit and emotional depth. Meek has talked in the lead-up to the album about it's East Coast sound, and it's apparent with orchestral-influenced production, and classic samples standing in the center of several beats, calling back a certain style of some of New York's iconic artists. Championships is indebted to hip hop history, and spares no attempt to knock the next generation and the "mumble rap" movement.

But what about those guests? Who is here is almost as important has who is not. While Rick Ross, Kodak Black, Ella Mai, 21 Savage, and several others make big contributions, it is the inclusion of Drake and the bars from Jay Z that will be talked about today. On "Going Bad", Drake and Meek trade rhymes and offer the final peace treaty from their 2015 beef, putting to rest the war that captivated so many of us, what seems like a lifetime ago.

Elsewhere it's a peak performance from Jay Z that has captured some of the release buzz, where Hov appears to directly address estranged friend Kanye West on "What's Free."

"No red hat, don't Michael and Prince me and Ye, they separate you when you got Michael and Prince's DNA" he raps. "I ain't one of these house ****** you bought, my house like a resort, my house bigger than yours, my spou- c'mon man." What some have read as a diss, actually plays more like rejection of the rivalry people try to paint between the Watch The Throne duo.

And speaking of rivalry, Cardi B shows up on Championships, ripping rhymes on "On Me." Her inclusion over former girlfriend Nicki Minaj has also drawn a lot of conclusions.

In the end, all of these features assist in an excellent album from Meek Mill, a fitting season finale for the embattled MC. Championships is the victory this long-fought story deserves. The album is now available everywhere.