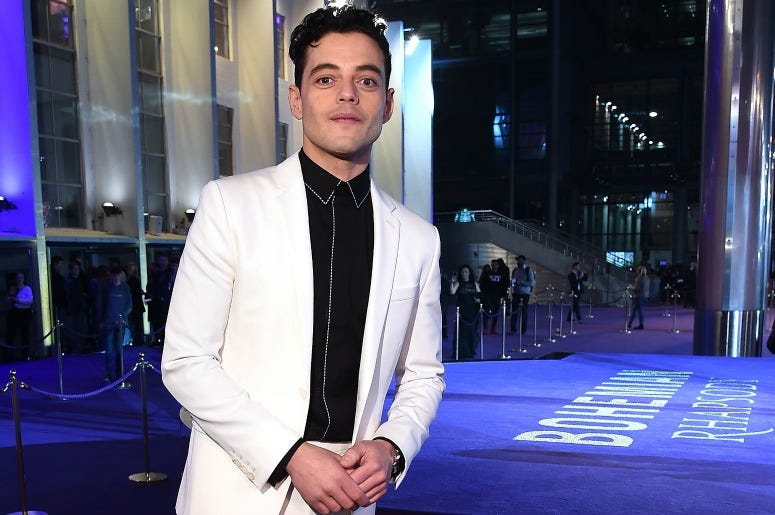 The road to Bohemian Rhapsody started with the band's biggest performance.

Rami Malek stopped by The Tonight Show Starring Jimmy Fallon on Monday, and explained that the band's Live Aid set was the very first day of shooting for the Queen biopic. "One of the greatest rock performance in history, it's considered maybe the greatest. For some reason our producers thought it would be a good idea to start with that on day one" explained Malek. "I thought, they must have a reason for doing this. If halfway through we get through this and we suck, they'll just pull the plug on the whole production, pack it up and go home. Save sixty-million-dollars, and we don't have to watch this b-rate version of Queen for three months."

"When I got the call sheet for day two, it was like winning an Oscar" he laughed. "We're back!"

Besides the charisma, Rami didn't possess many of Freddie Mercury's skills before filming. "I've never played the piano, I was scared of playing the piano as a kid. It seemed like such a foreign thing" he told Fallon. "I told them when I sat down, I go 'listen guys, I'm not gonna be the Hollywood actor that sells myself here. I don't play the piano. I don't think I'm a singer. I have a very unusual way of dancing. That's about as close as I can get to Freddie Mercury.' I think they thought, 'oh we'll get a humble actor for once. Here's a modest guy.'"

In addition to talking about the film, Malek joined Fallon in a game of A-to-Z, doing his best to name a band for every letter. Be prepared to scream all your favorite "Y" bands at the screen.

Bohemian Rhapsody is in theaters on November 2nd, and the soundtrack featuring never-before-heard live performances and some classic Queen cuts is available everywhere now.