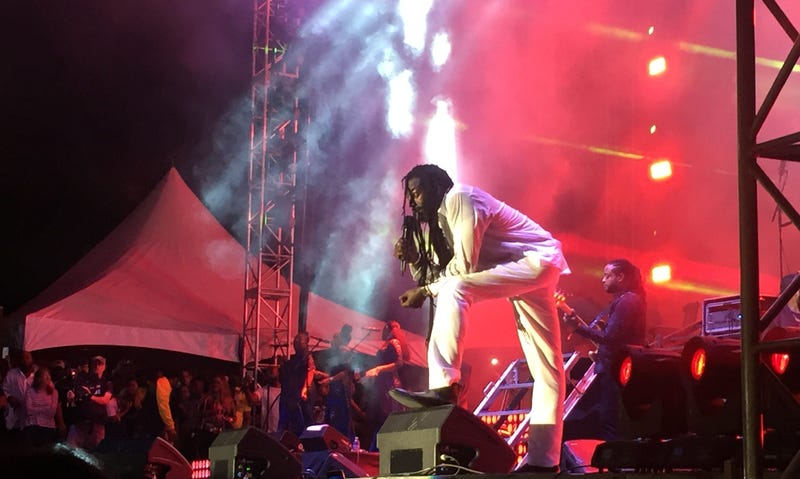 Video of entering the venue

Beres Hammond simply stated “Buju you have the whole place Overload” when the “Jamaican Hitmaker” joined him on stage. Buju Mania was running rampant everywhere, flights were sold out, hotels and AirBnBs fully booked and even taxis were hard to get. The restaurants were full, radio stations were blasting Gargamel music for days, and the national stadium filled to capacity. The electrifying energy that swelled the massive charged the air with positive vibrations and exhilarating anticipation for what we all knew was going to be a show of epic proportions. As we walked on to the stadium grounds we heard the “Rub A Dub Man” Cocoa Tea start his set with “Holy Mount Zion”. The stadium was in a fever roaring vuvuzela soccer horns mixed with airhorns and lit up like Times Square in New York City on New Year’s Eve.  We arrived in the maxed out press pit when "The Strong One" Etana was hitting the stage. She was great going through her set of hits. Next, “Big Deal” Christopher Martin took over the stage in fine style giving a commanding performance.

The set changes were MC-less with Christopher Martin calling the ladies “Love Doctor” Romain Virgo for a duet and then Christopher leaving the stage for Romain to have a stinging set with all of his top songs. The short sets were power packed. Moving on  Romain calls Assassin aka Agent Sasco for a combination and Romain walks off stage giving Sasco free reign to deliver a polished set.

Breaking the live reggae action “Love and Harmony” honorary Captain Jabba and Chutney from Massive B Sound out of  NYC continued to rock the crowd for the set change. They hit hard with Jimmy Cliff’s “Many Rivers to Cross”, Eric Donaldson’s “Cherry Oh Baby” and Bob Marley’s “Exodus” and few more foundation anthems. As they finished, Jabba said something to the effect  “Things ah go change now that the Rastaman dem ah take ova”

“Here Comes Trouble” Chronixx came out “Spanish Town Rockin” a heartical and rootical set that mesmerized the crowd with his chart toppers and plenty of songs from “Chronology” like “Queen Majesty”, “Likes”, and “Skankin’ Sweet”. He had a solid 20 minute set pleasing the eager crowd.

Breaking again for the main event Jabba and Chutney took over the stadium one more time playing dancehall anthems from Bounty Killer, Busy Signal, Vybz Kartel, Mavado, and Mr. Vegas among others eliciting tens of thousands to sing the lyrics word for word! It was like no other vibe I have felt before with so many knowing exactly what was going on. After they finished that energy, Roots Queen from Irie FM Elise Kelly made an appearance to announce the long awaited and highly anticipated arrival of Buju Banton.

Gargamel Fever was peaking and it was time! Dressed in all white with his long dark dreadlocks hanging freely the Modern Day King of Reggae and “Wanna Be Loved” icon Buju Banton aka Mark Anthony Myrie slowly walked on stage and blessed the legion of Gargamel Lovers with a hymn “On Bended Knees - Have Mercy on Me”.

The 10-piece "’Til Shiloh Band then blasted into “It’s Not An Easy Road” from 1992’s landmark album “‘Til Shiloh”. Everyone was singing with joy in unison, it was incredible, then going in “Close One Yesterday” where he declares “Jah put an angel over me, be strong, hold a firm mediation, keep your above the water, things must get better”. By this time we all knew Buju Banton was back and sharper than ever with a fiery delivery we all love so much. It was glorious!!! Next, going into a jazzy number before two one drop anthems from 1997’s “Inna Heights” - “Destiny” and “Hills and Valleys”. “Destiny” was so fitting seeing where he is at now at the focal point of the entire reggae world. It was during this song that sound “chip out” and the entire stadium sang the words with absolute perfection. It was so hardcore!  Singing “Only Rasta Can Free The People” from “Hills and Valleys” Buju reinspired energy to our universal movement. Rockin’ on, Buju already drenched in sweat, he high steps into “Mighty Dread” from “Unchained Spirit” released in 2000. Touching his first dancehall jam of night “ Me and Unoo - Bungo Cart” on the Wipe Out Riddim.

This first part of the two hour show was everything we wanted and more. The band was firing from tune to tune with surgical precision, he did take a break saying he was not in a talking mood, but addressed the gathering throughout the night and freestyled lyrics that drove the national stadium “Maaad.”

Shellin’ the place with high energy dancehall hits Buju Banton scores again with “Gold Spoon” from 1992’s Stamina Daddy, “Water Boy”, “Only Man” on the Bruk Out Riddim. Up again, into “Tra La La” on Lenky’s Diwali Riddim into “Up Close and Personal” produced by Danny Browne, Steven “Lenky” Marsden and Tony Kelly for Donovan Germain’s Penthouse VA Album - “Dancehall 1998”. Gargamel was in top form coming with full force. Keeping up the pressure, the band drops “Champion” rocking the crowd to the core - “Walk like a Champion, Talk Like A Champion”. Hotter still, he blazes “Too Bad” from the self-titled 2006 release right into “Batty Rider” having the whole place “Bogling”.

He has handled the stage all by himself up to this point and kept ratcheting up the vibes with “Have To Get You Tonight” calling upcoming UK Dancehall Diva Stefflon Don who came out in green shorts bodysuit sporting platinum blond hair. They mashed up the place! Stefflon Don was later noted to say something like “that was her greatest moment in her musical career.”

Easing off the dancehall hype, Buju delivered an incredibly soulful “Untold Stories” and then “Optimistic Soul” from 2009’s "Rasta Got Soul" album. A little after that he is crushing it again with “Wanna Be Loved” with all the massive in a singing mood once again.

Entering the Buju and friends part of the show was also exciting. Next to join him was the Queen of Reggae, Marcia Griffiths who graced singing “I Want To Be Closer” and “Woman A Fret” before belting out “Stepping Out Of Babylon”. Next, former Penthouse Labelmate Beres Hammond made his way to front and center stage, Beres was giving Buju nuff love and respect. They exchanged some thoughts before going into “Falling In Love All Over Again” where they traded parts when Buju sings and Beres deejays. We have seen this before, but it was so good to see again with so much love on the stage. The crowd was fully captured with “I Feel Good”, “Double Trouble”, “No, I Can’t” before hitting the one we were waiting for “Can You Play Some More?”.

Wow, it was like that, only to have another Penthouse Labelmate and life long friend Wayne Wonder join him for their hits. Both dressed in all white they were masterful. Buju noted he was gone so long the other artists were singing his parts drawing laughter from the massive. They continued on with “Movie Star/Bonafide Love”, “Forever Young” on the Real Rock Riddim, closing their duets with “Saddest Day”.These are all dancehall super classics from the 90s.


Buju took time to talk again revealing the exact time of incarceration “8 years, 6 months, 27 days, 13 hours, 5 minutes and 26 seconds.” Then hit a crazy freestyle busting the whole place one more time. Then busting it again with “Driver A” on the Taxi Riddim plus “Murderer” and cooling off with “"Til Shiloh” right into “"Till I’m Laid To Rest” adding veteran Glen Browning on guitar. Later, Buju said that Stephen Marley could not be there and called out his breddah Gramps Morgan dressed in a long decorated purple jacket for an amazing rendition of “Psalm 23”.

Buju Banton hailed the stadium one more time before going an Afrocentric “African Pride” and played one more song before the stage went dark then red and fireworks lit the Kingston sky, eyes and hearts of the people that just witnessed a spectacle like never before. It was historic and will forever be a part of Jamaican Lore and Reggae Music.

When speaking to Winford Williams from OnStage TV Jamaica he said “Well we know one thing for sure, Buju Banton is still Buju Banton”. We could not have agreed more. Later, I spoke to Don Mafia - Reggae Dancehall artist formerly known as Gringo and songwriter for prominent stars, after the show he had this to say “This was an epic event I hope the other artists will learn that authentic music never dies and real artists only get better with age. Buju is a worldwide icon and deserves the respect of every other artist”. When reasoning with Copeland Forbes commented “It was a great concert and Buju never let down once during the two hour set”. Sunday afternoon I ran into Chris Goldfinger from BBC Radio fame and he said “The production was top notch and loved the smooth transitions between the acts”. Robbo Ranx, World Class Award winning Reggae and Dancehall DJ commented it was an  "Epic Moment". Nuff Respect going out Destine Media the promoters for the show to all the parties involved.

I was honored to be there for this most memorable experience! The only other three other times I have felt so much energy and love for artists was when Buju Banton first played Sumfest in 1992 when he had like 5 songs in the Top 10 and the other when Buju and Sizzla played Best of the Best Bicentennial Park in Miami, Florida, and Buju Banton and Friends farewell concert in Miami’s Bayfront Park 2009. This by far was the most unforgettable. I was not into the scene for Bob Marley’s One Love Peace Concert, but have to imagine similar energies were exchanged.

Here is the scheduled setlist:

Steven “Lenky” Marsden and Mitchum “Kahn” Chin are the only original ‘Til Shiloh Band members returning with the passing of our beloved drummer Basil “Prince” Shirley and visa issues for Frank “Bassie” Burt now residing in South East Florida.

To give some depth to the experience, this month March 2019 marks my 30th anniversary of travelling to Jamaica and 30th visit. Seeing Dennis Brown and Gregory Issac at Sunsplash in 1990 was awe inspiring drawing me back to the Island year after year to catch the spirit and energy of Jamaican Reggae in Jamaica and USA. Having attended Sunsplashes, Sumfests, Western Consciousness, multiple A St. Mary Mi Come From shows, Jam Jam, White River Reggae Bash, tons of shows in Negril and many Rebel Salutes are events this writer has experienced in Jamaica. Plus all the big US Festivals Sierra Nevada World Music Festivals, Reggae on the Rivers, Best of the Bests, Midwest Reggae Fests, Southern California Bob Marley Days in San Diego, Long Beach, and SF and Seattle, Cali Roots Fest in Monterey, Ca and One Love Cali Fest in Long Beach.

Buju Banton the day before the show

Welcome to Jamaica!!!!! . . . Buju Banton is ready to see you! In less than 12 hours history takes place inside National Stadium, Kingston JA for the first show for Long Walk To Freedom. Be a part of history and get your merchandise, which will be on sale at the National Stadium @everythingbuju @bujuofficial #bujureturns #lwtfconcert #everythingbuju