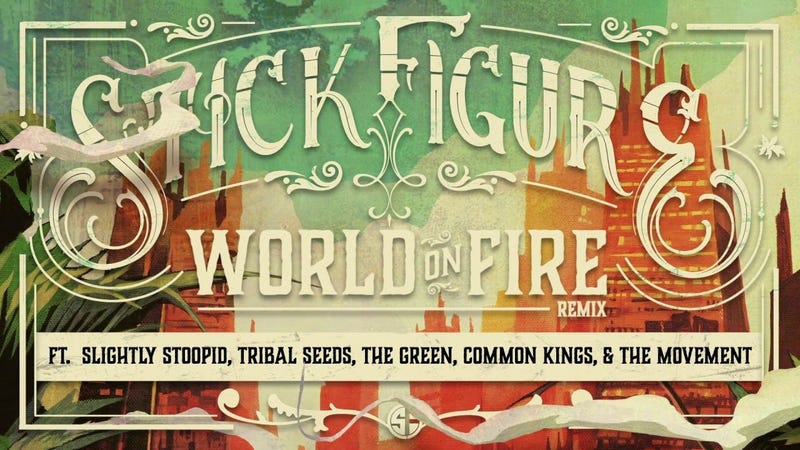 How do you make a cool song even  cooler? You add a bunch of your favorites to do a remix. Bob Radio has had this song in heavy rotation along with Above the Storm. This remix sounds great and we love all the artists Scott Woodruff, band founder and leader, has asked to be on the remix. We got this in rotation now. Tune in to hear it over the radio or stream.

Stick Figure's "World On Fire" came out last June, featuring Slightly Stoopid. Now artist and producer Scott Woodruff has made a good thing even better with a remix  adding Tribal Seeds, The Green, Common Kings and The Movement to the track.

"I just wanted to get a new flavor on it, get some other guys in the mixing machine," Woodruff told Billboard about the remix. "I just hit up a few of our favorite artists and asked if they wanted to do it, and pretty much everyone with the exception of one or two were down for it, so we sent them the stem and they did their thing, sent it back and we mixed it. It was just an idea we had, and we were able to make it work." And Woodruff is confident that the song, which was inspired by last year's California wildfires, has taken on different levels of meaning thanks to world events since its release.

"I think now it's more a song about greed and people just collecting possessions in stuff, and how that becomes their priority in life," he says. "If I had the power to take that all away, money and possessions, I'd just burn it all so we're just left with love and each other."

As the remix comes out, Woodruff is in the midst of working on a new Stick Figure album, a follow up to 2015's Set In Stone. He says the project is "definitely in its final stages, a couple weeks to a month away of doing final mixes and putting the last touches on it," with a hoped-for summer or fall release. "World on Fire" is slated for inclusion, and Woodruff has 14 other tracks he's been working on, including "the most exciting feature we've ever worked with," though he won't identify who that is yet.

"It's got the same Stick Figure sound but this one is the biggest production I've ever done," he said. "I got a new studio right before I started working on this album and I've definitely been furthering my production skills. So it sounds like Stick Figure with a new flavor, new styles, a little bit of something for everyone."