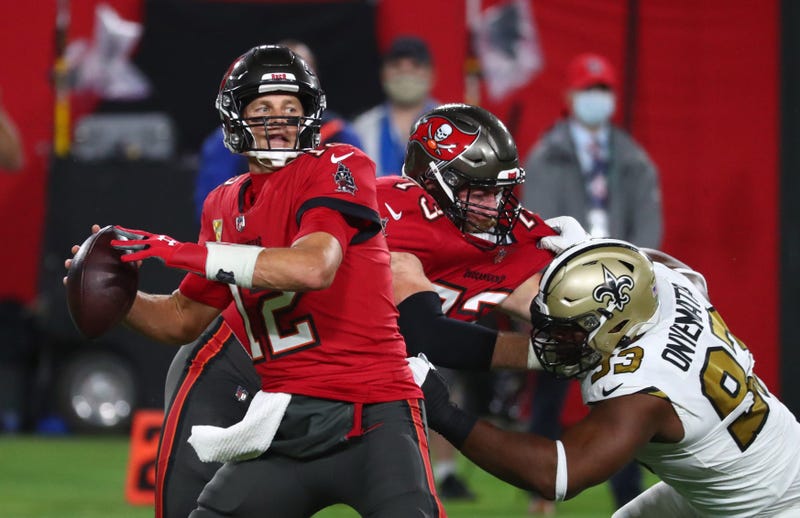 Let’s start with the bad. The Tom Brady-led Tampa Bay Buccaneers were down 31-0 at halftime to the New Orleans Saints last night. They then managed to score a grand total of three points in the second half, losing to the Saints 38-3. Brady had four interceptions through the first eight games of the season. He nearly matched that feat in this one game alone with three interceptions, two of which came before halftime. In his previous six games, he had thrown just one interception. He averaged a QBR of 90 in his previous three games. In this game, he had a QBR that was under FOUR. It was the first time all season he had not thrown a touchdown pass. It’s also the first time all season he didn’t complete 60% of his passes thrown. A tiny silver lining is his 209 passing yards was not his worst in a game this season. It was his second worst.

For the first eight games of the season, Brady’s Buccaneers averaged 25 PPG. They put up a whopping three points on Sunday night. The 35-point loss was THE worst loss of Brady’s 335-game NFL career (including playoffs). Yesterday it seemed like he was throwing balls away and was very off timing-wise. When you consider the fact that he was getting all-world talent for the first time this season in Antonio Brown – in addition to having Rob Gronkowski, Mike Evans and Chris Godwin – you can’t put up just three points. By the second quarter, Drew Brees had three passing TOUCHDOWNS, while Brady managed just four passing COMPLETIONS.

Brady was very poor in last night’s game; he would be the first to admit that, which he was quick to do right after the game. Fast-forward to today – whether it was in the morning, mid-day or even afternoon – we heard everything from you shouldn’t pick the Buccaneers to go to the Super Bowl to Brady isn’t close to what he used to be. Did we forget how good this Brady guy was in the first half of the season? The Buccaneers averaged 25 PPG in their first eight games. Nobody in the NFL had a better point-per-game differential. Despite losing 38-3 to the Saints last night, they STILL have a better point-per-game differential than them. I hope we took notice last night of Brady taking complete ownership and accountability for the loss. This seems kind of familiar…..

In the 2014 NFL season, the Patriots went to Kansas City and lost 41-14 to the Chiefs. Many “pundits” – and even loyal Patriots fans – said that Brady was over the hill and it was simply time to move on. His QBR was less than 30 in that loss, which put them to 2-2 on the season. He more than doubled his interceptions thrown in that game compared to his previous three games. You know what he did in that whopping loss to the Chiefs more than six years ago, similarly to what he did yesterday? He took accountability and vowed to be better. Here’s what happened after that fourth game of the 2014 NFL season....

The Patriots went 13-2 the rest of the way, won the Super Bowl, and Brady was named the Super Bowl MVP. Two seasons later, he would AGAIN be named the Super Bowl MVP. The next season, at FORTY, he won the regular-season MVP. The next season he was the Super Bowl-winning quarterback, and the very next season he took the Patriots to a 12-4 record. If you just took the fifth game of the 2014 season until now and discounted the first 14 years of his career, Brady would be a first-ballot Hall of Famer and one of the ten greatest quarterbacks of all-time. In that 2014 season in which he faced a mountain of criticism, you can make a legitimate argument that not only did he prove to be a franchise quarterback for the duration, he may have been the best quarterback in the league since then. Not the most talented, not the flashiest, not the most skilled and certainly not the most athletic, but the BEST. Even if you exclude his last Super Bowl win as recently as 2019, since the 2014 season, Brady by himself has more Super Bowl MVPs than Aaron Rodgers, Patrick Mahomes, Russell Wilson, Big Ben and Lamar Jackson COMBINED.

When the all-time greats get knocked down and doubts come from both the media and fans alike, the media and fans eventually end up eating their words. We witnessed that with some guy named LeBron very recently in the NBA Bubble. National members of the NBA Media said the Lakers could very likely be knocked out of the first round. A couple of months later we saw LeBron holding up his fourth Finals MVP trophy, 17 years into his NBA Career. I can’t wait to write an article next week talking about why you should NEVER doubt Brady because like LeBron, he’s STILL great, you’ll see.