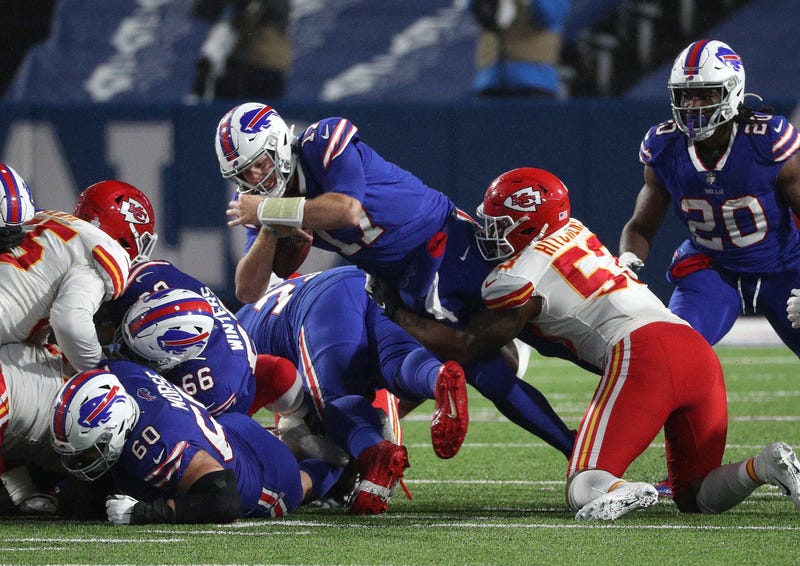 The Buffalo Bills entered their game against the Kansas City Chiefs on Monday with one goal in mind: don’t get beat over the top. And, for the most part, they were successful. Tyreek Hill had just three catches for 20 yards, and Patrick Mahomes threw for just 225 yards – his fewest since Week 1.

Unfortunately for the Bills, they had no answer for Kansas City’s rushing attack.

“They went into this game saying, ‘Okay, we’re going to make sure Patrick Mahomes and those receivers don’t beat us over the top, we’ll force them to run the ball, we’ll keep everything underneath,’” Bills sideline reporter Sal Capaccio said on After Hours with Amy Lawrence. “But I don’t think the plan was to allow them to run the ball that way. I think the Bills were willing to sacrifice giving up some yards on the ground, but they can’t do it in the manner in which they did. They just gave up chunks and chunks. It goes back to them being a run defense that’s been leaky, and I think a lot of that is them being undersized. Sean McDermott really likes versatile, athletic, fast players up front, and I think the Bills, they’ve kind of gotten bullied a few times this year.”

Clyde Edwards-Helaire, a first-round pick out of LSU, rushed 26 times for 161 yards (6.2 yards per carry). As a team, the Chiefs ran 46 times for 245 yards and a score, controlling the ball for nearly 38 minutes. Once the Chiefs got to the red zone, Travis Kelce took it from there, hauling in touchdown receptions of 11 and 12 yards in the first and second quarter, respectively.

“They had a lot of misdirection,” Capaccio said. “Andy Reid is so smart, and Clyde Edwards-Helaire was terrific. I think they just got them with playing some really good sound football, and the Bills just did not play disciplined on defense.”

Josh Allen, meanwhile, had his moments, but he finished 14-of-27 for 122 yards, two touchdowns and an interception, as the Bills (4-2) have dropped back-to-back games since their 4-0 start. They are still atop the AFC East, but can they recover from this two-game skid?

“I think they have the right leadership in charge to be able to do something like that,” he said. “The Bills are still a good team. They have a lot of talent. I don’t think Josh Allen is as bad as he played on Monday. He might not be as good as he played through the first four weeks, but I do think he’s the guy that they need under center. They’ve done a nice job of grooming him and where he’s headed in his trajectory. I also think that Sean McDermott and this coaching staff is the right coaching staff to have in these types of situations.”