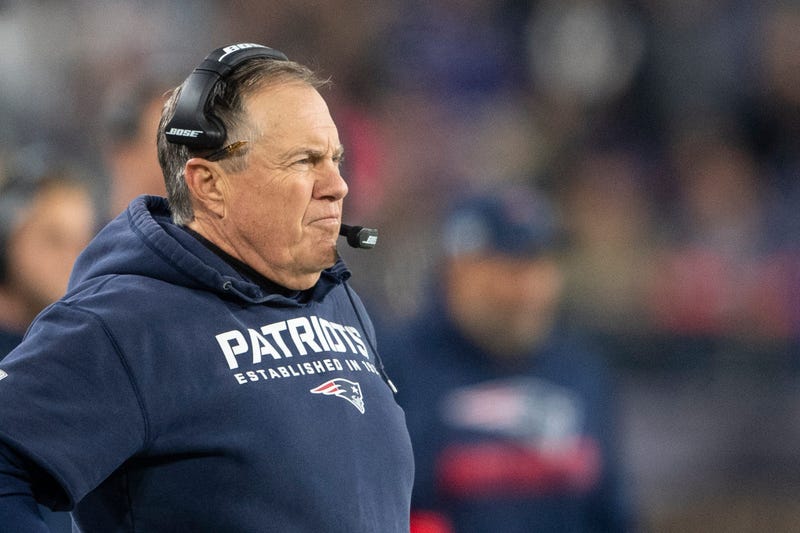 “We usually don’t see that from Belichick, especially for a player who hasn’t played a snap yet,” Boston Globe NFL reporter Ben Volin said on The DA Show. “Usually the answer is, ‘Well, we’ll see how things go. We’re all working very hard trying to improve.’ But he’s really been pumping up Cam Newton’s tires and driving the hype train himself. Everything he says is probably true. I do think that Cam Newton has been very motivated and a hard worker. I do think that Belichick is maybe taking a little bit of potshot at Tom Brady, who, over the last few years, made it very well-known that he didn’t feel appreciated by Bill Belichick and by the organization.”

It’s also possible that Belichick is trying to change the narrative put forth in Jeff Benedict’s new book, “The Dynasty,” which chronicles New England’s two decades of dominance.

“The excerpts that have come out seem to have been dumping on Bill Belichick a little bit, not portraying him in the most flattering light,” Volin said. “So I wonder if this is Belichick fighting back a little bit against the perceptions being made about him in this book. I also think that by applauding Cam Newton so publicly, Belichick is sending a message to Jarrett Stidham, who was supposed to give Newton a real run for his money in training camp. There was a lot of expectations on Stidham. Can he seize the opportunity? He just did not have a very good camp. He got injured. I think Belichick was maybe sending a message to Stidham, like, ‘If you want to be a leader and a starting quarterback, these are the things Cam Newton is doing that you need to do as well.’

“And then I wonder if Belichick is buttering up Cam Newton a little bit to get him to take a contract offer from the Patriots when they inevitably come to him and say, ‘Yeah, we know you want $30 million a year, but how about $20 million a year?’ So I do think there’s a lot more going on there than just Belichick praising Cam Newton.”

Either way, Newton will lead New England in the post-Brady era. The Patriots have won the AFC East in 16 of the last 17 seasons, but can they make it 17 of 18?

“I think they’re a playoff team, and that’s a little bit something different this year because there are now seven playoff teams, so I do think we’ll be seeing the Patriots in January,” Volin said. “I think if you look at their roster on paper, it’s like a 6-10 team. They do not have a lot of talent, they are rebuilding in many places, the defense lost five starters from last year, [and on] offense, who is Cam Newton going to throw to? However, the X-factors [are] Bill Belichick, Cam Newton being healthy again, the division not being so hot. I think this is one of those years where a 9-7 record might be able to win the AFC East, and that’s kind of where I see the Patriots right now.”

The Patriots, it is worth noting, do not have an easy schedule. In fact, they have an extremely difficult schedule.

“Statistically, it’s the hardest schedule in the NFL,” Volin said. “They have a brutal road schedule: at Kansas City, at Seattle, at Houston – even at Miami and at Buffalo won’t be easy. [They have] two games in L.A. So I think on paper this is a 6-10 team, but you got to figure that Belichick himself is good for two or three wins. So I think they’re going to be in the playoffs, 9-7 – maybe best-case scenario 10-6. But I don’t see them as legitimate contenders for the Super Bowl. Kansas City and Houston and Baltimore are just way ahead of the Patriots at this point.”

If Newton plays well for the Patriots, is it possible that he could stay in New England? Or will this be a one-year marriage?

“That’s definitely possible, especially if Cam Newton is committed to getting all the way to free agency in March,” Volin said. “If that’s the case, then it becomes a highest-bidder type thing. Then I think chances are pretty good that it’s just a one-year marriage. That said, who knows? Both sides are going into this with an open mind. Belichick has professed his love several times already for Cam Newton, saying he’s the hardest worker, and [he’s] done everything they could ask of him, he’s got a great personality – Cam Newton seems to be really enjoying his time in New England, and who knows? If they end up having a great season and both sides want to continue, I’m sure they can find a way to make it happen.

The Patriots, as Volin explained, would will have exclusive negotiating rights with Newton until March 2021.

“They’ve never been the team that comes back with the highest offer, so that, to me, is what would stand in the way,” Volin said. “If Newton wants to cash out if he’s in that position, it’s probably not going to come from the Patriots. But if he just decides 'I love being the starting quarterback here' and him and the Patriots can come up with a reasonable contract, there’s no reason why Cam Newton can’t be the Patriots’ quarterback for three, four or five more years.”