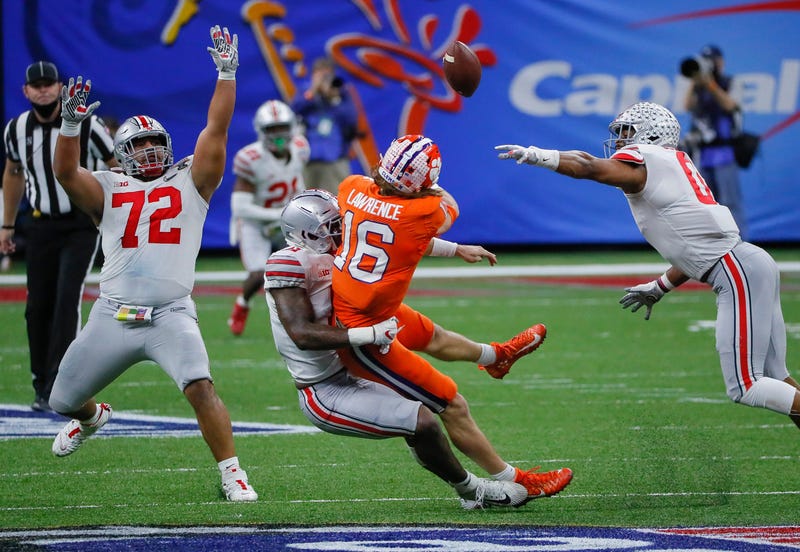 Seemingly every college football analyst believes that the national championship game between Alabama (12-0) and Ohio State (7-0) will be a track meet. Nonstop, up-and-down-the-field action for 60 minutes.

Well, Barrett Sallee isn’t so sure about that.

“Seventy-five points in Vegas for a national title game, I don’t know, man. That’s pretty aggressive,” the CBS Sports HQ and CBSSports.com college football writer said on Tiki & Tierney, referring to the over/under. “I think it’s going to be driven by defense a little bit more than we think. I think the inconsistencies that Ohio State’s front seven had were over-exaggerated.”

Ohio State looked helpless defensively in a 42-35 win over then-No. 9 Indiana on Nov. 21, but the Buckeyes have since stiffened. They allowed 12 points at Michigan State on Dec. 5, 10 points against then-No. 14 Northwestern in the Big Ten Championship on Dec. 19, and 28 points against Trevor Lawrence and No. 2 Clemson in the Sugar Bowl last Friday.

Clemson hadn’t been held under 34 points all season.

“I think Ohio State suffered from something that I think a lot of teams suffer from: they couldn’t find their identity,” Sallee said. “Most teams take three, four, five games for that to come together. Well, they’re on game seven now. It takes a little while. The defense has done a great job – did a great job against Northwestern and again against Clemson. That front seven is tremendous, and they fit well up the middle.

“Without Landon Dickerson, Alabama is going to have a hard time stopping them,” Sallee continued. “You’re going to see pressure up the middle, and Mac Jones is going to have to get off his point a little bit, and that’s not good.”

Offensively, Ohio State running back Trey Sermon rushed for 524 yards against Northwestern and Clemson, while Justin Fields had as many incompletions as touchdowns (six) against the Tigers. Fields finished with 385 passing yards, 42 rushing yards and six scores, as Ohio State led by 28 in the fourth quarter.

“I think you’re going to see Justin Fields take a few risks against Patrick Surtain and some of those DBs,” Sallee said. “I just think it’s going to be driven by defense a little more. There still might be a lot of points, but 75 combined points, I don’t know about that.”