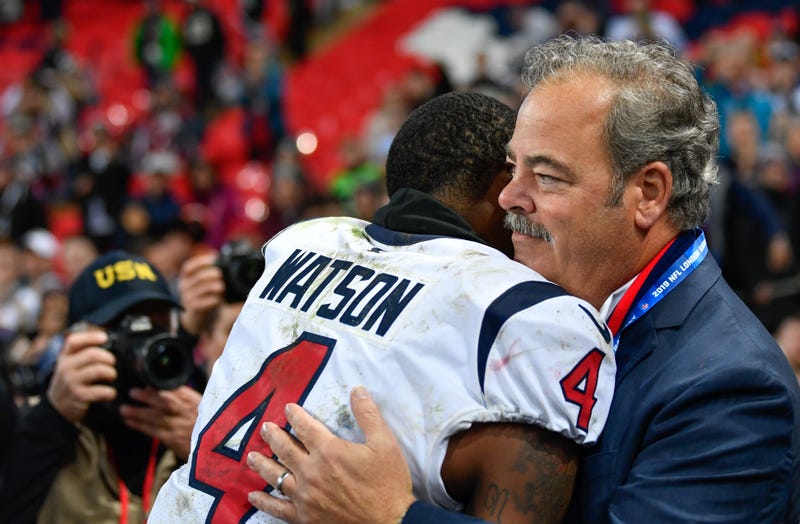 The Houston Texans have made a series of questionable decisions over the last 12 months, and franchise quarterback Deshaun Watson is not happy about it.

Well, for the general manager, he did not.

And Zach Gelb is livid about it.

“I’m disgusted, my blood’s boiling, and I’m not even a Texans fan,” Gelb said on The Zach Gelb Show. “But I’m passionate, and when I see incompetence, I can’t stand it – and for the last year-plus, I have bashed the Houston Texans probably more than anybody because their moves simply just don’t make sense.”

As if trading DeAndre Hopkins for peanuts wasn’t bad enough, Texans owner Cal McNair reportedly went back on his word and didn’t consult with Watson before hiring Caserio.

“There is zero justification on trading DeAndre Hopkins for basically a bag of balls,” Gelb said. “There is zero justification for letting the Patriots’ former character coach, Jack Easterby, continue to get his way. You get rid of Bill O’Brien? Fine, he deserved to go. . . . [But] not only does Jack Easterby continue to be in the organization, but it seems as if he has Cal McNair on puppet strings and he’s moving Cal McNair with each and every move. I’m not saying the hire of Nick Caserio is a bad one. Time will tell. But the process of it is abysmal.”

McNair, Gelb said, should have stepped in when O’Brien was trying to trade Hopkins. He should have either nixed the deal or demanded that O’Brien get more in return for the three-time All-Pro receiver.

“Cal McNair is the guy who tries to be buddy-buddy with everybody, but when push comes to shove, you see his true colors,” Gelb said. “This guy, right now, leading an NFL organization, could mess up a one-car funeral procession. He seriously could. . . . You go with Nick Caserio because this hypnotist in Jack Easterby told you to go get Nick Caserio. How do you keep on messing everything up?

“The bizarre part here is Cal McNair is messing everything up to please Jack Easterby,” Gelb continued. “Is this incompetent owner really saying, ‘I’m doing everything to appease Jack Easterby because I like him so much and I believe in his mysterious ways so much that I’m going to risk my franchise quarterback wanting out?’ . . . Jack Easterby? Who? You’re letting this guy run your organization into the ground?”

Caserio, by the way, has spent his entire career with the New England Patriots. Is he going to allow Watson to help determine the Texans’ next head coach? Is that something Bill Belichick would do?

“I would imagine that Deshaun Watson isn’t going to have much of a say in who’s going to be the next head coach,” Gelb said. “And if I’m Deshaun, I’m livid.”

There are rumblings that Watson could request a trade.

“What I’ve seen in the short tenure of Cal McNair is just incompetence and bad decision after bad decision after bad decision,” Gelb said. “You can’t mess this up. There is absolutely zero way that you trade Deshaun Watson. You just don’t do it. So get your act together, figure it out, and you better make sure that your franchise quarterback is happy. Because if you trade him, your organization is set back right now – it will be set back for years and years and years to come. I don’t care what picks you get. Stop messing things up, and find a way to make your quarterback happy.”

It’s been all downhill ever since.

“I’m so annoyed by this, how this guy, Cal McNair, took a team that was in the playoffs, was up 24 points against the team that ended up winning the Super Bowl in the Chiefs, and a year later, they stink,” Gelb said. “They’re garbage. They’re horrible. And you know there is a great player in your organization in Deshaun Watson and you keep on annoying him – by trading away DeAndre Hopkins, by letting Jack Easterby hire Nick Caserio. Enough. Cal McNair, get a grip on your team and start to figure out how to make some decisions – and it should be priority No. 1 to make your franchise quarterback happy. And if you trade him, you’re a buffoon. If you can’t fix this, you should be shunned from the National Football League. I don’t care how much money you have.”