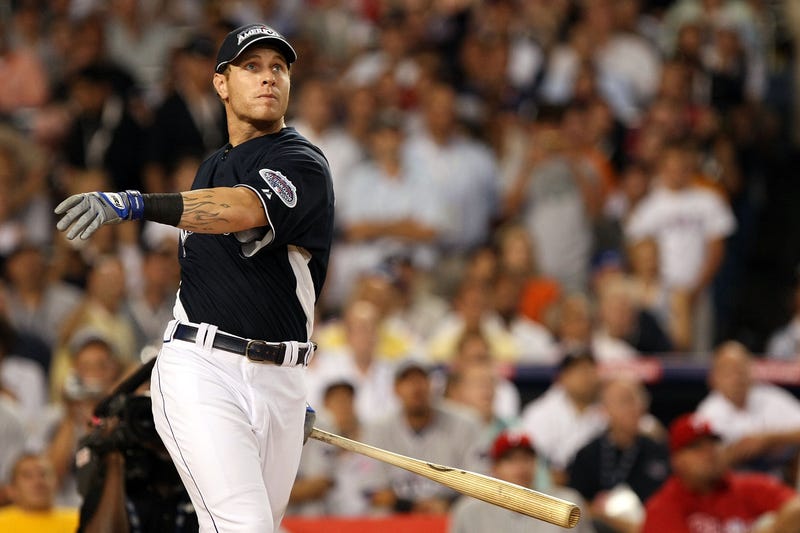 5) 2005, Detroit. It was Bobby Abreau's night. He had never hit more than 31 homeruns in a season. but his performance in this Derby matched perhaps his greatest in baseball. Abreau smashed a then-record 41 homers on the night, including a mind-boggling 24 in the first round. His blast into the upper deck concourse gave the fans an eye-popping moment, and by the time his round was done he was receiving standing ovations in Detroit.

4) 1994, Pittsburgh. This night was defined by the best hitters of their era. The event was owned by Ken Griffey Junior, and punctuated by Frank Thomas. Junior would win the first of three Derbies, and the Big Hurt's titanic blast to the facade of the upper deck in centerfield is the stuff of legends. The competition was at cavernous Three Rivers Stadium, one of the enormous cement bowls of the '70s. Thomas' blast was measured at an astounding 519-feet, reaching a part of the ballpark only scavenger birds and nosebleed ticket holders normally did.

3) 2019, Cleveland. Pete Alonso and Vlad Guerrero Junior put on a tremendous duel. The stage was set in the semis when Vladdy dramatically outslugged Joc Pederson with three swing-offs. Then the Polar Bear outlasted Guerrero in the finals for a fantastic battle of rookies. Alonso finished with a record 57 homeruns in the Derby, and then crushed 53 in the regular season.

2) 1993, Camden Yards. The construction of this retro stadium changed the way we'd design ballparks. The irregular angles, dimensions, open walkways, and congregation areas were all revolutionary engineering. For thirty years, ballparks were built with utility as the priority, leaving a rash of monstrous, cold slabs of concrete. But with the refurbished warehouse in right field, Ken Griffey Junior took aim. His blast hit the base of the wall, leaving everyone in awe. It was the first time anyone had accomplished the feat. Juan Gonzalez ended up winning the event in sudden death, but Junior's missile, along with an evening of delight at gorgeous Camden Yards was one of the purent baseball moments of the decade.

1) 2008, Old Yankee Stadium. Much like Vince Carter's 2000 Dunk Contest, it was the defining Derby performance. Josh Hamilton may not have won the contest, but he left his imprint forever. His return from an imploded career due to substance abuse was the talk of the season. And then in the Bronx he took it to a new level. Justin Morneau forgettably won the event, because everyone remembers Hamilton. His twenty-eight homeruns in the opening round left mouths agape and players bowing at his feet. His moonshots into the starry NYC night were majestic and powerful. It was a historic performance to seal his amazing comeback story. It's still the greatest moment in Derby history.