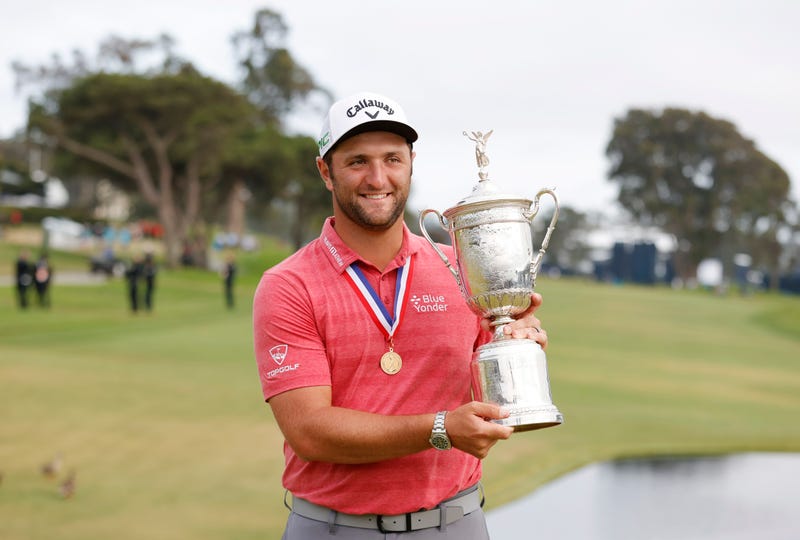 Jon Rahm told reporters last week that his game was "firing on all cylinders" when he was forced to withdraw from the Memorial Tournament on June 5 due to a positive COVID-19 test, and that he felt confident heading into this past weekend's U.S. Open as the betting favorite.

Suffice to say, Rahm put those words into action. A pair of clutch birdie putts on his final two holes helped him capture his first major on Sunday, as he won the U.S. Open at Torrey Pines in California by one stroke, with a 4-under 67.

"Jon Rahm's been knocking on the door for a while. He's a young guy, but he's been knocking on the door for a while," Adams said. "He tied for fifth at The Masters, tied for eighth at the PGA Championship. Here was a U.S. Open at Torrey Pines, and remember: he's won at Torrey Pines before in the Farmers and interestingly when he won it, he shot a final round of 65, compared to yesterday where he tied the low-round of the week with a 67...

"Jon Rahm's just like many of the young players who are extremely honest. There's a candor in the game right now that hasn't really existed in many, many years, in terms of the information they share. And Jon shared with us that he was playing what he felt was the best golf of his life. And aside from that, he had control over all of his faculties... When he came from Spain to the United States to play golf for Tim Mickelson, who is now on Phil's bag for brother Phil, he couldn't even speak English. He learned to speak the language by essentially listening to rap songs. He's a very determined young man.

"He did have an issue, though, and his issue was anger... We got to know Jon Rahm better as Jon Rahm got to know Jon Rahm better, on the stage that is the biggest in the world that he now competes on. He got better and better at controlling that, and he shared that experience and journey with the world through the media, as well. He talked about it whenever he was asked. So, there are so many different levels that this is impressive, and it was the combination of all these things that led to that victory, in my view."

Rahm, who entered the U.S. Open as the third-ranked golfer in the world, returned to the No. 1 overall spot following his win. He also became the first Spanish-born player to win a U.S. Open.

The entire golf conversation between Adams and Lawrence can be accessed in the audio player above.