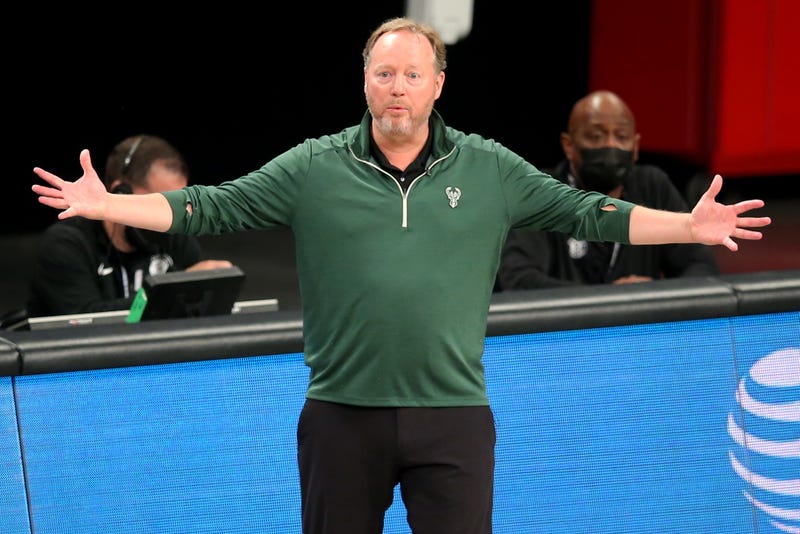 The Milwaukee Bucks have hit an old, familiar playoff wall, and they're now two losses away from falling short of their championship goal for a third consecutive season.

Milwaukee resembled anything but a title contender against the two-seeded, James Harden-less Brooklyn Nets on Monday night at Barclays Center, as they were obliterated, 125-86, in Game 2 of their East semifinal series. It was the Bucks' second-largest postseason loss in franchise history, according to ESPN Stats & Info.

Although the series hasn't lived up to its hype as a de facto East Final, there's still time for the Bucks to right their wrongs at home, during Games 3 and 4. But if Milwaukee continues its downward trend, The Athletic's Sam Amick believes head coach Mike Budenholzer could be out of a job soon.

"I told somebody last night, 'That game last night, that kind of game gets you fired in the regular season,'" Amick told the Reiter Than You show on Tuesday. "And nobody gets fired in the playoffs, but Mike Budenholzer was already going into the playoffs with a lot of pressure on him. The way they continue to use Giannis [Antetokounmpo] a lot of times as an initiator in a way that people don't necessarily think he should be used, it's been ugly.

"And to have that happen with no James Harden on the other side... If this continues, I don't think it bodes well for Mike or the Bucks at large. They went out, they got Jrue Holiday. I feel like they think they have the roster that should be able to take out a team like the Nets, as talented as they are. But it hasn't even been a series so far."

Game 3 will take place on Thursday night at Fiserv Forum in Milwaukee, with tipoff scheduled for 7:30 p.m. ET. According to FiveThirtyEight's projections, the Nets have an 87-percent chance of advancing to the East Finals.

The entire NBA conversation between Amick and Reiter can be accessed in the audio player above.