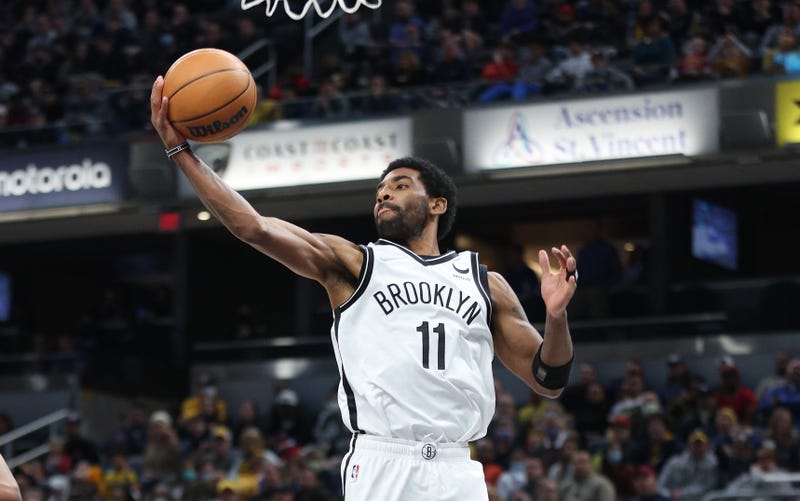 Brooklyn Nets superstar guard Kyrie Irving made his regular season debut on Wednesday against the Indiana Pacers, scoring 22 points with four assists in the team's 129-123 win. A sight for sore eyes to fans who grew impatient with his extended, deliberate absence.

Since the seven-time All-Star isn't vaccinated against COVID-19, he's returned as a part-time player. Due to New York City's vaccination mandate, Irving isn't eligible to play in home games. And although the Nets weren't previously on board with this irregular role, virus outbreaks have forced the team to adapt.

"Whether or not he's going to play the rest of this regular season on the road, whether or not he's only going to play in road games in the playoffs, Irving is here, the Nets don't have a thing to lose," JR said during the JR SportBrief show on Wednesday. "You don't miss talent like that. You don't bring him in and things hit the skids. You don't ruin chemistry. He's at the top of the food chain in the NBA. There's no falloff...

"Sometimes you've just got to swallow your damn feelings and you've got to fall in line. Irving being back is going to help the Nets in the short-term and long-term. And it sounds crazy to say it: even if he doesn't play home games in the playoffs, he'll certainly help the Nets on the way and on the road to the playoffs. What happens in April, May, June? That's a whole other conversation to hold. That's going to be crazy, if he's a part-time player."

To no one's surprise, Irving had to shake off some rust during the first quarter. He missed his first three shots -- one a play designed by coach Steve Nash -- but eventually found his groove in the second, scoring eight straight points. Irving's performance, coupled with Kevin Durant's 39 points, seven assists, and eight rebounds, helped Brooklyn erase a 19-point deficit and snap its three-game losing skid.

Last season, Irving averaged a team-high 26.9 points and 6.0 assists in 54 games for the Nets. With two home games scheduled for this Friday and Saturday, he won't see more action until next Monday, when the team visits the Portland Trail Blazers. According to FiveThirtyEight, Brooklyn currently has a 22-percent chance to reach the NBA Finals and a 10-percent chance to win the championship.

JR's complete thoughts on Irving's return and the Nets' title hopes can be accessed in the audio player above.