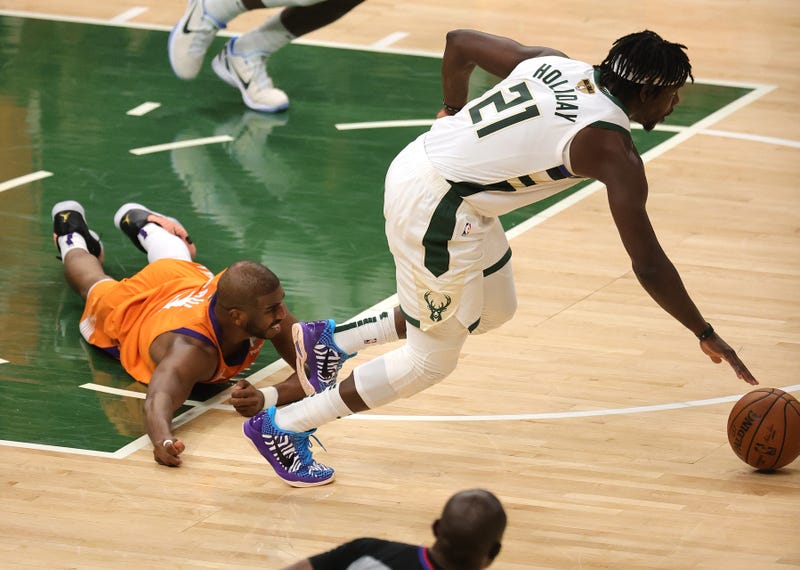 Momentum has significantly shifted in the Milwaukee Bucks' favor, following their thrilling and dramatic series-tying win over the Phoenix Suns in Game 4 of the NBA Finals on Wednesday.

But the Suns' pair of road losses aren't concerning to JR, as he still believes that Phoenix will outlast Milwaukee, and ultimately be crowned champions.

"I'm still going with the Phoenix Suns in six or seven games. And why is that? Because Milwaukee -- even after last night -- Milwaukee still has not shown to be consistent," JR said during Thursday's edition of the JR SportBrief show. "Milwaukee still has not shown that they can string together games. And not, 'Let's put Khris Middleton out there and hope that he gives us 40 each game.' But how about Khris Middleton just drops 25? How about he lights you up on the road? How about he gets busy on Saturday night in Phoenix?

Game 5 of the best-of-seven series will take place Saturday night in Phoenix, with tipoff scheduled for 9 p.m. ET. According to FiveThirtyEight projections, the Suns still have a 60-percent chance of winning their first-ever NBA title.

JR's complete thoughts on the Suns and the NBA Finals can be accessed in the audio player above.