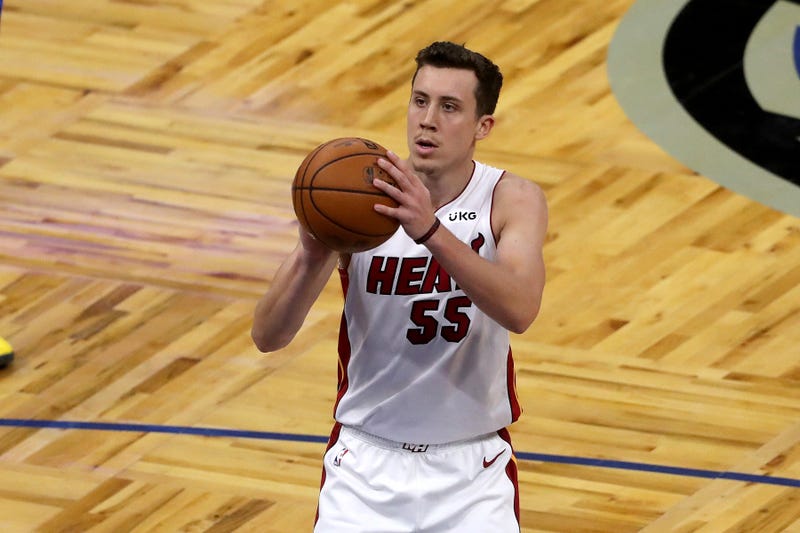 Can you imagine graduating from a middle school with just four other classmates? Imagine being 5-foot-7 as a freshman, and just four years later, finding yourself as a college basketball player. This took place at the prestigious Williams College, a member of the NCAA's Division III. Now, envision yourself making a jump from a Division III school to the University of Michigan, and being named the Sixth Man of the Year in the Big Ten, a major Division I conference. The odds were certainly stacked against that 5-foot-7 high schooler, but that's where the story began for Duncan Robinson.

Despite coming on strong at a major Division I program, Robinson went undrafted in 2018, and was relegated to the NBA's developmental G-League. By the end of the season, he ended up not just making the NBA, but starting for the Miami Heat, and the next year, he became a full-time starter for a team that made the NBA Finals. Robinson’s confidence never wavered, even in the biggest of games. During the 2020 Finals, he connected on seven three-pointers in Game 5 to stave off elimination. The only two players who've made more threes in a Finals game are Ray Allen and Steph Curry, the two greatest three-point shooters in NBA history. Both Curry and Allen had very different resumes coming into the NBA, in complete contrast with Robinson's.

Allen was the No. 5 overall pick in the 1996 NBA Draft and went on to become a first-ballot Hall of Famer. Curry was the No. 7 overall pick in the 2009 draft, and has become an undeniable top-20 player in the history of the sport. Yet, it's the undrafted, former Division III player in Robinson who's eclipsed 500 made threes in fewer games than both Allen and Curry. In fact, Robinson reached the 500 career threes milestone faster than any player in league history.

It took all of 152 career games -- not even two full seasons -- for Robinson to reach that plateau. Curry, through his first three seasons (180 games), managed to amass 372 threes, and Robinson’s shooting prowess was far superior to Curry's, if you compare the beginning to both of their careers. An undrafted player could very well give Curry a run for his money for greatest three-point shooter the game has ever seen.

The only other players in NBA history to have even totaled 500 three-pointers made in less than 200 career games are Luka Doncic and Damian Lillard. Both players have been All-NBA First Team members in their careers, and this illustrates the type of company that Robinson finds himself in. Doncic was the third overall pick in the 2018 draft, and Lillard was the sixth overall pick in 2012. Robinson didn’t just set the record for being the fastest to 500 made threes -- he obliterated it. Doncic previously held the record at 187 games. Robinson did it in 35 fewer games.

Robinson had hoped to hear his name at the podium during the 2018 draft, but clearly the 30 NBA teams had different plans in mind. The top-four shooting guards selected in that 2018 draft were Shai Gilgeous-Alexander, Jerome Robinson, Zhaire Smith, and Donte DiVincenzo. Robinson has made more career threes than these four players combined. In fact, he has more made threes in a single Finals game than Smith has made in his entire career.

Early on in life, so many of us were told what we couldn't do. Far too often, whether it's aligned with reality or not, we accept the limiting expectations that others place upon us, with little introspection. Robinson garnered no interest from Division I programs coming out of high school. He received no interest from NBA teams when he declared for the 2018 draft. Fortunately for NBA fans, that's not where Robinson's story ends. Any outside noise and self-doubt got eradicated early and often for Robinson, due to the unwavering belief he has in himself. And as a result, we're watching the most unlikely great shooter in NBA history, considering what he's had to overcome just to make the league in the first place. Luckily, for all basketball fans, Robinson’s story is just getting started.