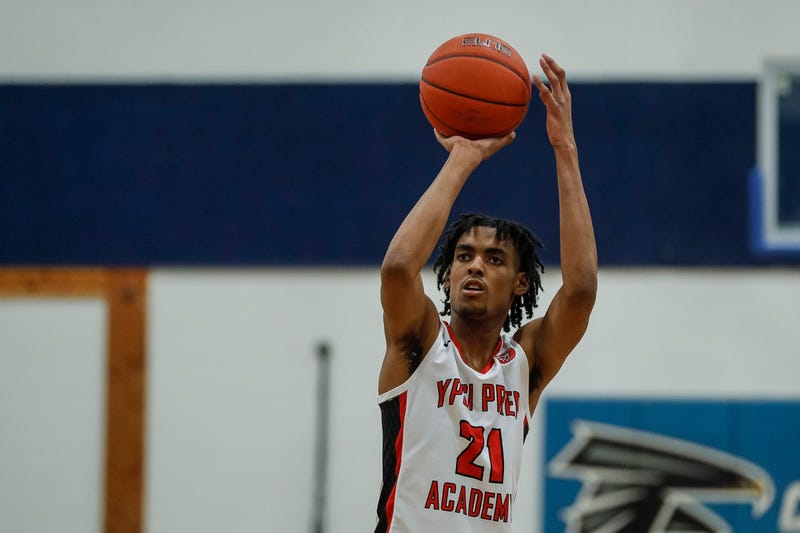 There are a precious few high school athletes who have carried the hype of Emoni Bates. The 6-foot-7 superstar was thrust onto the cover of Sports Illustrated at just 15 years old, compared to the game's legends. "Emoni Bates: Born For This: Magic, Michael, LeBron … And the 15-Year-Old Who's Next in Line." Bates had long been wooed by the power brokers in college hoops, and even more had been scared off by the assumption that he'd never play collegiately. As a Michigan product, there were plenty of analysts who predicted that if he did attend college, he'd decide on either Michigan or Michigan State. Sure enough, Bates chose the Spartans last summer.

He had become the rare high school phenom, whose game transcended the normal recruitment cycles and instead grew into something larger than life. He was labeled as the "next Kevin Durant" -- people compared his hype to LeBron James and Kobe Bryant.

Bates decommitted from Michigan State this spring, once again leading to speculation that he'd jump to the pros. International leagues were ready. He could reclassify and perhaps head to the NBA's G League. He could certainly play for Overtime Elite, a high school/pro hybrid team. Bates had options.

Which is why when he chose Memphis last month, it was somewhat surprising. Bates created one of the greatest recruiting classes in college basketball history, joining Jalen Duren as the No. 1 and No. 2 ranked players in their class, according to some services. Perhaps coach Penny Hardaway is an incredible recruiter. Perhaps the NIL money (and other benefits) are extremely enticing with the Tigers. Perhaps after years of intense scrutiny, Bates simply wanted to be a college kid.

No matter the reason, it's a gargantuan win for college basketball. With the rise of salaried options for high school talent, the somber drumbeat of concern in college hoops has intensified. If players had options overseas to earn big money, and options here to earn good money, why would they ever choose college basketball again? Jalen Green and Jonathan Kuminga played for G League Ignite last year, and both were drafted in the top 10 this summer. Add Isaiah Todd, who was drafted early in the second round, and three players from the same G League team were selected within the first 31 picks. None had to play college ball to reach their dream of playing in the pros.

For the Class of 2021, No. 3 prospect Jaden Hardy and No. 9 prospect Scoota Henderson will head to the G League Ignite. That makes two of the top 10 kids in high school who'll play professionally, and scrap the idea of tying education into their basketball careers. But that's a far cry from the dystopia of the top 10-20 prep stars avoiding college and marching straight to other options. Bates is one of the most famous high school stars of the last 20 years, and certainly weighed the option of playing pro right away. But in the end, the allure of Memphis was too strong.

Perhaps the reality of NIL is paying huge dividends. We've seen college quarterbacks -- including one who has yet to play a down on campus -- earning seven figures. Maybe stories of young men who are playing in front of a smattering of fans in Fort Wayne and the Rio Grande Valley have trickled back to the high school stars. Being a star on campus, having students camp out for tickets to see you play, and competing on national television in March Madness may still resonate. For the most famous high school basketball star in years, the sport still has something top prospects want. College basketball fans are the big winners.