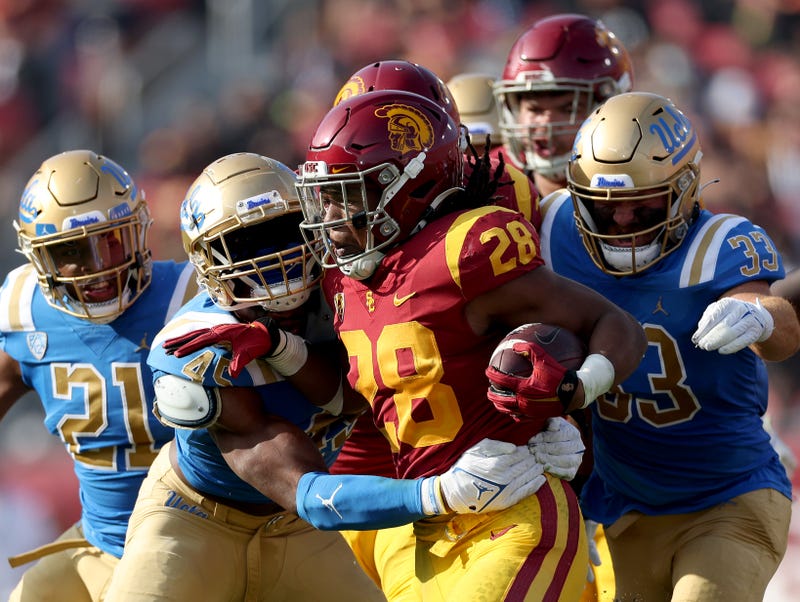 There's something nostalgic about cheese curds and beer before a Saturday afternoon at Camp Randall in Madison. Similarly, watching Chief Osceola plant his flaming spear at Doak Campbell usually elicits a goose-bump reaction from thousands of loyal fans. College football's latest realignment -- which features Los Angeles programs UCLA and USC departing the Pac-12 for the Big Ten -- threatens the regional rivalries and matchup traditions that define the sport.

Taking a cup of marbles and randomly spewing them all over the floor sounds like something ripped out of the back page of a cruel fraternity hazing book. That's essentially what the Big Ten did when they poached the two California schools from the Pac-12. The move completely resets the geographical map for what the conference will look like in the not-so-distant future.

And nobody in their right mind believed that, in a new age of college football, Lincoln Riley would remain in a conference that always appeared stoned and confused. Placing Oregon aside, the Pac-12 has long been the red-headed stepchild of the Power Five, and USC needed to find a way to battle higher- level competition, to gain credibility for their success. From unfavorable time slots on national TV to underwhelming conference matchups, the rest of the Power Five -- the Big Ten, SEC, Big 12, and ACC -- has long reigned supreme.

Riley, who's now leading USC, and UCLA coach Chip Kelly still could've found a different path to prominence, but it was most likely going to be a lot harder. Now, the two tango with the likes of Ohio State, Penn State, and Michigan to justify their records. Getting ranked inside the AP's top-25 will be easier, and there's more of a path to reaching the coveted College Football Playoff. Plus, the Trojans and Bruins will be playing during better East Coast hours.

Even though there's many upsides to elite programs joining an already strong conference, it feels like the Southern California brothers are trying to disrupt the Midwesterners swag. The Big Ten is defined by historic rivalries like Ohio State-Michigan and Michigan-Michigan State, and the Iowa Hawkeyes often finding ways to pull in top recruits, despite questions of why anyone would want to set foot in Iowa. As pleasant as 70-degree temperatures may feel in November, cool afternoons during the fall have a special and different vibe.

While the quality of football will be better, the specialty of Saturdays for the locals will feel different. The classic matchups will always be huge, but new rivalries could form and take the place of older ones. Should the Trojans and Bruins form must-watch games with those in the Midwest and Northeast, the locality of the conference will diminish.

With college football trending in a direction of continued realignment, it's safe to wonder if the classic rivalries will start to fade, over time. Inevitably it'll lead to better competition, more entertaining games, and increased fan interest for a sport that's inching closer to the NFL, when it comes to popularity.

At its core, reconfiguring college football's landscape should make it harder for top dogs Alabama, Georgia, Clemson, and Oklahoma to steamroll everyone on a yearly basis. Attrition at the top is something that fans have long craved, as they've regularly rolled eyes at the cupcake schedules for the juggernauts. There should also be more clarity from the CFP committee, regarding criteria for ranking. Elite programs competing with another should also separate the men from the boys. Positives do exist.

In a perfect world, college football would zap the idea of regionally-oriented conferences and create two super leagues. Emulating the pro sports model would be effective for a sport that's coming to the realization that amateurism no longer exists. Pretending these loosely, regionally-focused conferences are sufficient is ludicrous. And the talent gap between the top and bottom is massive -- the best programs get to flip on autopilot for most of the season.

Between new NIL regulations and conference realignment, it's time to accept that the sport many have come to know and love will continue to change at a rapid pace. And while some of these alterations are positive, the negatives of de-regionalizing the sport -- thus interfering with the complexion and dynamic of matchups within it -- will be more unbearable than the snowy conditions in Ann Arbor.