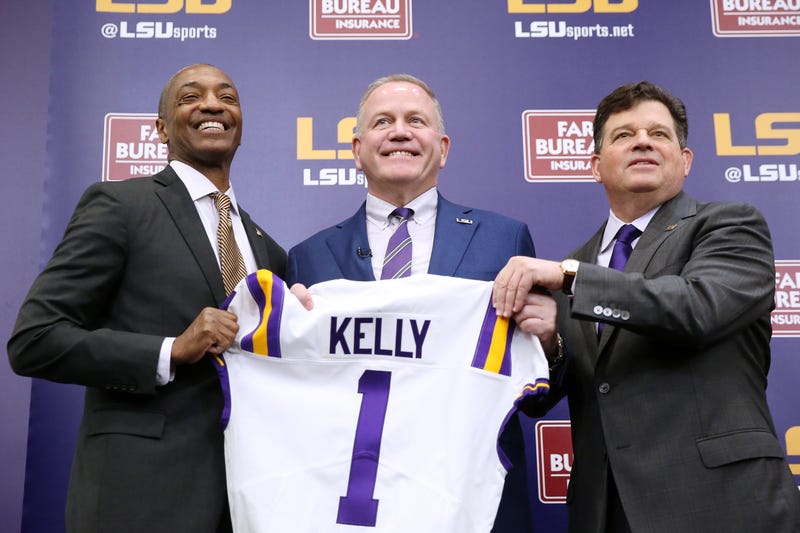 There's nothing shameful about leaving one job for a more desirable position elsewhere. But the abundance of head college football coaches jumping ship at one program -- lacking the decency to wait until the end of the season -- for unfathomable paydays with other schools is worse than a taunting penalty on 3rd-and-long.

Three-hundred million dollars -- that's the combined value of Lincoln Riley and Brian Kelly's new contracts at USC and LSU, and Mel Tucker's extension with Michigan State. The Trojans are rolling out the red carpet, reportedly providing Riley's family with access to a private jet and a new home. Desperate to land a big-time head coach, it's understandable why these three programs mustered up the bucks to offer massive deals.

Last week, questionable enablement of college coaches wasn't restricted to the Power 5 level, either. Colorado State head coach Steve Addazio received a $3 million buyout after finishing 4-12 in just 16 games with the program. His dismissal came on the heels of an ejection for two unsportsmanlike conduct penalties in their season-ending blowout loss to Nevada. Later, allegations of racism toward a university staff member came to light.

The morality and ethics behind reigning college football coaches with golden confetti and caviar on a platter -- juicing every last penny from schools and supposedly mentoring young men -- needs to be put into question. Even in an era when student-athletes can profit off their name, image, and likeness, the value of player endorsements can't come close to the hefty contracts doled out to their coaches.

College coaches constantly preach the value of morality and selflessness, and being part of a team. Too often, they're the embodiment of hypocrisy, failing to stick to their word. Teammates have each other's backs through thick and thin, and don't quit in the middle of night. Particularly concerning: coaches speaking out of both ends of their mouth are able to resurface elsewhere without a stain on their resume.

As the highest-paid public servant in most states, it's common knowledge that college coaches sit on a hierarchy level above governors. If watching them get escorted out of stadiums surrounded by security detail doesn't highlight their importance, perhaps their sickening level of entitlement and enablement from universities should rub outsiders the wrong way.

Treating high-level politicians like royalty is justifiable. But football coaches? We're not talking about the dudes drawing up X's and O's now, are we? Those tasked with preparing a team, not playing in the actual game, surely aren't deserving of such lavish treatment. Clearly, the undercompensated student-athletes have much more to do with a program's success.

College coaches ride and fall with their teams, but the inflated contracts and financial rewards that come with winning outweigh the relatively short-term implications of losing. For evidence, look no further than the situation that transpired with former LSU head coach Ed Orgeron. After riding the magic carpet to a national championship with quarterback Joe Burrow back in 2019, Orgeron was forced out of town less than two full seasons later.

Clearly, Burrow was the captain manning the controls. Yet Orgeron reaped the rewards by signing a contract extension, which included his recently received $17 million buyout, at season's end.

Perhaps what's most sickening is a coach's ruthless nature, and willingness to harass and abuse his players. Although he was ultimately fired after a slap-on-the-wrist, one-game suspension, Washington head coach Jimmy Lake was caught on camera punching linebacker Ruperake Fuavai in the Huskies' loss against Oregon in early November. Lake never owned up to, nor apologized for his actions. In all likelihood, he'll land somewhere else. A similar incident occurred with Texas A&M head coach Jimbo Fisher a few years ago, when he grabbed one of his players by the facemask.

At some point, NCAA officials will need to step in and create guidelines that regulate what coaches can and can't do. Until then, college football coaches will continue to exploit the system and taunt programs without a yellow flag being thrown.