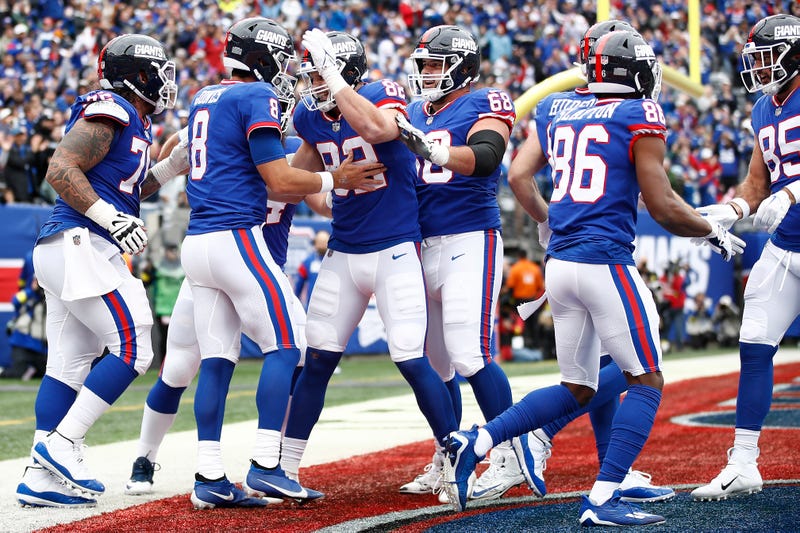 No. 1: Aaron Rodgers is fine

After the Packers beat the Patriots in overtime on Sunday at Lambeau Field, Aaron Rodgers said, "This way of winning, I don't think, is sustainable." What does Rodgers know? This statement is flawed in multiple ways. The Packers' receivers are already getting better. If they improve incrementally at this rate, we'll be talking about Rodgers' abundance of riches. The great quarterbacks make great weapons, Rodgers will turn Romeo Doubs and Christian Watson into dangerous young receivers.

MVP-level Rodgers didn't win anything in the playoffs. The past two seasons have been remarkable on an individual basis, but empty when it counts. And he doesn't need to be an MVP candidate for them to go far. The same can be said about Davante Adams' run in Green Bay. What did Adams win?

Green Bay should be thrilled about its run game. Through the first four weeks, they rank seventh in the league in average rushing yards (145.0). Last season they ranked 11th overall, with 111.8. And is there a better two-headed backfield than Aaron Jones and A.J. Dillon?

They also have Rashan Gary. He's tied for third in the NFL with five sacks, and kept the Packers alive in the first half of Sunday's game against New England. Gary has a real shot to win NFL Defensive Player of the Year, and he's the kind of closer who wins in the postseason.

No. 2: Russell Wilson is also fine

A recent Bleacher Report Gridiron graphic comparing Russell Wilson and Geno Smith is making the rounds, and it implies that the Seahawks upgraded at QB. This is a case of reckless graphic making -- how dare they! Wilson's improved every week in Denver. He was zero-percent of the problem on Sunday against the Raiders. The Broncos have so many issues: dumb penalties, running back injuries, coaching decisions, run defense.

Wilson was 17-for-25 for 235 yards, two touchdowns, zero picks. He also had a 124.9 passer rating. Without Wilson playing well, Denver would've lost 32-3. As for Smith, this won't last. I mean, it can't, right? Here's a new rule for 2022: throw out offensive stats against the Lions. Smith has a lot to prove before he makes other quarterbacks look bad in viral graphics.

The best way to stop an opposing quarterback is to keep them on the bench. The NFL is having a rushing renaissance. Tape nerds have explained, in detail, how defenses are now sitting back in the two-high safety look to counter the passing game. But, the issue with that strategy is that the other team can run the ball. The Raiders, Falcons, Eagles, Titans, Seahawks, Giants -- even these Chiefs, to some extent -- controlled the game on the ground.

Not every game with big rushing numbers played out the same way. But the slow pace hurts opposing QB's. The Broncos sat back and let Josh Jacobs run for a career-high 144 yards for the Raiders. And the result? Just 25 pass attempts for Wilson, and no shot for the offense to find a rhythm or tire out Vegas' defense. Even in an overtime loss, the Pats ran the ball and screwed up the Packers' offensive flow. If I’m a QB chasing big numbers in a contract year, I want the defense to stop the run and give up a bunch of chunk plays. Give me good receivers, terrible cornerbacks. Here's a fact: you can't throw touchdowns from the sideline.

The smart, next-level Giants fans know this 3-1 start won't help them achieve their long-term goals. According to Tankathon, their home win over the Bears dropped them down to 24th in the 2023 draft order. They're not going to end up that low, but they could be lowkey sabotaging the future. And who's going to play quarterback over the next decade?

Daniel Jones will soon be a free agent, and he's averaging a career-low 157.8 passing yards. New York's perfectly set up to draft a franchise quarterback... well, except for that 3-1 record. The Giants' problem is their opponents. They entered the 2022 campaign with the easiest strength of schedule, based on preseason betting odds, and nothing has changed. They play the 3-1 Packers in London next, but after that, they play one team outside the NFC East with a winning record (Vikings in Week 16).

Maybe a veteran QB is the answer for these Giants. But that's short-term and unpredictable. And you never know if you're going to get a Matthew Stafford or a Matt Ryan. They could consider going big. First-year coach Brian Daboll was in New England with Tom Brady -- maybe they could milk one more year out of the GOAT? Aaron Rodgers may want to explore media options in New York. Lamar Jackson would look pretty good in Giants blue. But if the Giants want to build a consistent winning team, the traditional way, it means drafting another young quarterback.

No. 5: Jimmy G is proof why QB stats need to change

The box score says Jimmy Garoppolo threw a 57-yard touchdown pass to star wideout Deebo Samuel in the 49ers' home victory over the Rams on Monday. Garoppolo happened to be in the same building when Samuel carved up the Rams' defense. That's the extent of the credit he should get for that big play. The streaker who got tackled by Bobby Wagner deserves as much credit as Garoppolo. He was lucky the pass didn't turn into a pick-six.

While it's a somewhat meaningless debate, it gets to the heart of the 49ers' issue. They beat the Rams on Monday night with short passing and running. Is that enough to win a Super Bowl? San Francisco didn't think so, and they drafted Trey Lance. They're running it back with the limited QB experiment.

Changing the QB stat model could be positive, since so many interceptions are on the wideouts. And it's the basis of my "Nate Peterman isn't playing as poorly as you think" piece from 2018. 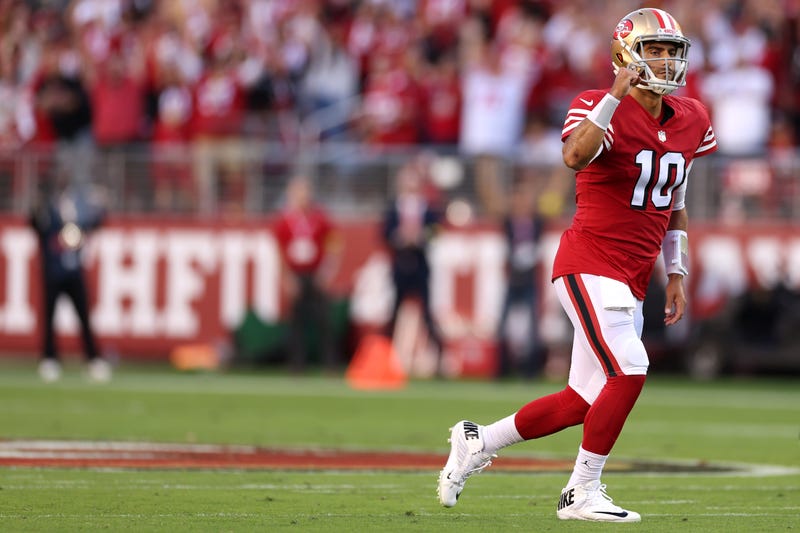 No. 6: Stop screwing over the Saints

The last few years, I've casually observed as officials make calls that hurt the Saints at the worst times. But, as anyone who's heard me on the "Dan Patrick Show" or "Maggie and Perloff" knows, I so also serve as the bus driver of the Andy Dalton bandwagon. And so I had to wake up early Sunday to support my guy. Unfortunately, we ran into an officiating buzz saw in London.

Poor officiating isn't a good excuse for losing. And over the course of a long season, calls should even out. Not for New Orleans. Ever since the infamous missed pass interference call that cost them a Super Bowl trip back in 2018, the torrent of questionable calls have continued to pour down upon them.

On Sunday in London, two critical calls helped determine the outcome of the game. A questionable hands to the face call on Saints safety Tyrann Mathieu, and a pass interference penalty when Marshon Lattimore got tangled up with Vikings wideout Adam Thielen. Look, New Orleans has a lot of problems. The officials, Michael Thomas' health, possibly coach Dennis Allen. Dalton wasn't one of them on Sunday. They should stick with the Red Rifle -- even if Jameis Winston and his cranky back are ready to go.

Remember when the only injury that could possibly influence the spread was quarterback? Maybe we can say the same thing about the pass rushers now. The Steelers turned from a playoff contender, to a team with a real chance to get a top-five pick without T.J. Watt. Pittsburgh can play anyone they want at QB. It doesn't matter if Watt isn't out there. The Browns' defense couldn't get off the field without Myles Garrett in a loss to the Falcons. The Commanders defense should be good, but they're harmless without Chase Young.

The Chargers' defense looked below-average without Joey Bosa against the Texans. Also, watch out for Denver without Randy Gregory on Thursday night against Indianapolis. Everyone's getting to Matt Ryan, but the Broncos might not be the same team without their new pass-rushing star.

Saints kicker Will Lutz is pretty good. But he's not Justin Tucker -- he doesn't have a nickname like "Legatron," or hold league records like Matt Prater. And before Sunday, he never hit a 60-yard field goal, but he almost hit two across the pond in London. He hit one from 60 and then double-doinked a 61-yarder as time expired. He looked comfortable with both kicks.

NFL coaches have to throw out every metric they've had on field goal length. Today's kickers can hit 60-plus yarders consistently -- which is a long way of saying, maybe Broncos coach Nathaniel Hackett was onto something when he brought out Brandon McManus for a 64-yard field goal at the end of their Week 1 loss to Seattle.

Two weeks in a row, we've had play clock issues. The back judge failed to blow the whistle against Tom Brady and the Bucs in Week 3, and then even more egregiously against Mac Jones and New England in Week 4. And the addition of former officials on broadcasts has helped avid fans understand how the system's supposed to work and why QB's have always received an extra fraction of a second. Why complicate the matter for officials?

Wishy-washy rules are fine in baseball, like the neighborhood play at second base on double plays. But not in the NFL, where every single detail is under the microscope. A team of officials on the field and in New York study every blade of grass on a sideline catch, but they can't blow the whistle at zero?

The NFL should copy the NBA shot clock setup. When it hits zero, the whole backboard lights up in red and it's easy to see if the ball left the player's hand. How cool would it be to see the whole scoreboard turn red in NFL stadiums?

No. 10: Fast-forward to the Bills-Chiefs title game

The odds don't lie. The Bills are the Super Bowl favorite on DraftKings and the Chiefs are second. Next comes five NFC teams. We finally get to Baltimore at eighth. If the Ravens can't beat the Bills with a 20-3 lead at home, they're not beating them in Buffalo during the playoffs.

The AFC was supposed to be loaded entering this season, because of all the big signings. Nothing really changed. Last season's divisional-round matchup between Buffalo and Kansas City was an all-time classic. NFL fate demands a sequel, and we're going to see it in January.

We strive to be a platform where varying opinions may be voiced and heard. The views, thoughts, and opinions expressed by the author(s) of this article and/or by those providing comments are theirs alone, and do not represent those of Audacy, Inc. We are not responsible for any damages or losses arising from this article and/or any comment(s).
Featured Image Photo Credit: Sarah Stier / Staff / Getty Images