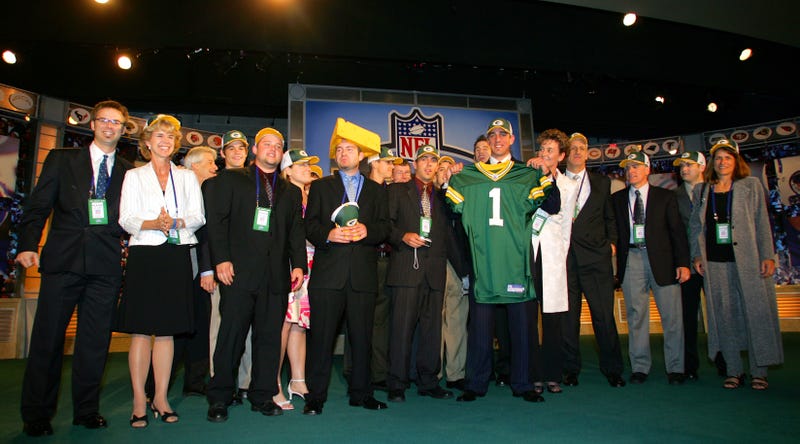 The Green Bay Packers' decision to take Aaron Rodgers late in the first round of the 2005 NFL Draft has undeniably paid dividends. As the successor to Hall of Fame quarterback Brett Favre, he's thrown for 51,245 yards with 412 touchdowns, won three league MVP awards, and hoisted a Lombardi Trophy.

But the organization wasn't lauded for its selection of Rodgers on draft night, 16 years ago. The pick received substantial backlash from football analysts, fans, and even Favre, who was still a few years away from leaving Green Bay.

Sports Illustrated columnist Andrew Brandt, who served as the Packers' vice president from 1999 to 2008, joined After Hours with Amy Lawrence on Thursday to recount the story of Rodgers' infamous first-round slide, and the drama that ensued.

"It was a poignant night, certainly my most memorable time in the draft room for those 10 years," Brandt said. "Two things happened that night. Number one, we had about 20 players rated first-round grades, we were picking No. 24 overall, and 19 of those 20 players were gone after picks Nos. 19, 20, 21 -- they were gone. So, the second thing that happened was, the one name that's remaining on our board above the first-round grade is a quarterback -- and his name is Aaron Rodgers -- and no one's taking him. Including teams that told him -- I found out later -- to his face, 'If you're there, we'll take you.' Like [former Tampa Bay Buccaneers head coach] John Gruden took Cadillac Williams. So, this happened.

"Now we have this combustible moment, where the coaches are very much saying, 'No way in hell can we do this. We can't take a player who's not going to help us.' Because coaches are judged on immediate results... And then on the personnel side, it was all about, 'Hey, what do we always say? Trust the board. And yes, the player's not going to help us, but let's do this.' So I got [Rodgers] on the phone, I held him there for 15 minutes... No one wanted Aaron Rodgers... We make the pick, we have a Lambeau Field draft party, a thousand people below us, and that booing shook our souls. It shook our core. It was a thousand people vociferously booing, to the point we thought something had happened. And then we realized, 'Oh, it's about our pick. Oh my god.'

"And of course, Brett was unhappy, and Brett's agent was unhappy. And Aaron put on a good face, but why would he be happy going to a cold place where he's not going to play? And it never really was something anyone sort of said to us, 'Hey, that's a great pick.' We endured for three years, Brett's like, 'Why am I coming into the office every day and sitting next to my replacement?' And Aaron's like, 'When am I ever going to play?' And people don't realize this: when you make a selection like this, there's consequence, and you have to manage the situation..."

The entire conversation between Brandt and Lawrence can be accessed in the audio player above.