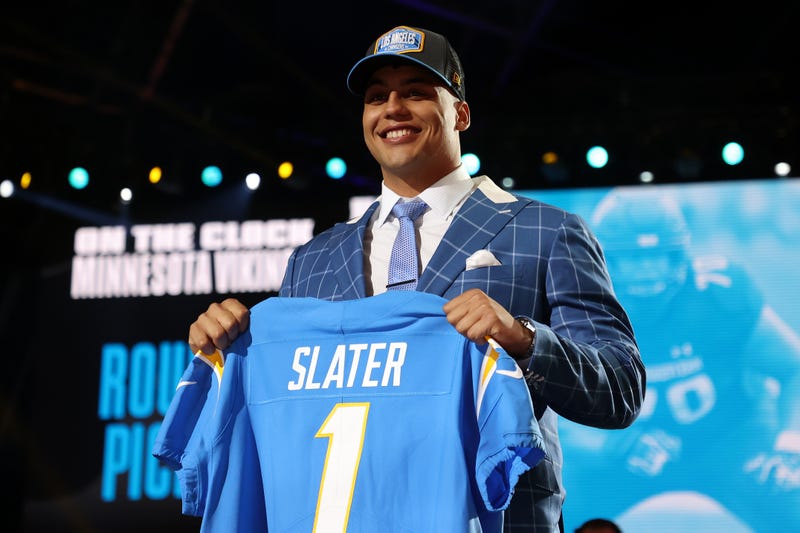 Rashawn Slater wasn't the first offensive lineman off the board in this year's NFL Draft, but that outcome didn't bother him too much. He believes that the Los Angeles Chargers still ended up selecting the class' top-ranked tackle.

"I've always looked at myself as someone who could do it all, or could achieve [first-round pick recognition]," Slater told The Zach Gelb Show on Thursday. "My whole life, I've been used to being an underdog. And so, whether I believed it or not, I had it in my head that no one else would believe it, because I was under-recruited in high school. People didn't respect Northwestern. So, in my mind, it's like, 'Ok, no one will ever respect me, in that regard. Always have to earn it.' But, to finally see it happen and see other people be on the same page as me, it was pretty wild...

"I knew that my journey was always about myself and not really about anyone else. I was confident going into it and coming out of the draft that, wherever I went, I'll succeed. So, I wasn't too worried about that situation... Yes, I do [believe I'm the best offensive lineman]... I've had the mindset this whole time that, 'Whatever happens, I'll be ready.' I know who I am, so I don't rely on validation from anyone else..."

Slater, who was selected 13th overall by Los Angeles back on April 29, entered the draft as the second-ranked offensive lineman and 11th overall prospect on Pro Football Focus' NFL Draft Big Board. Although the 6-foot-4, 315-pound senior opted out of the 2020 season due to the pandemic, he started 37 games during his time at Northwestern, and in 2019, he gave up zero sacks, one quarterback hit, and just five pressures across 355 total pass-blocking snaps, according to PFF.

Slater has the strength, athletic ability, and processing skills to immediately be a serviceable starter in the trenches. But serviceable won't cut it for him. He's set the bar much higher.

"I understand that everything's earned and not given, so my number one goal right now is to master the playbook and come to camp in great shape and earn that starting spot," Slater said. "And be an anchor on the o-line that allows Justin [Herbert] to do his thing, and just be consistent. I feel like the best thing an o-lineman can do is be consistent. As far as accolades, I'm always pursuing something high, so I want to be an All-Pro player."

Slater became the first offensive lineman selected by the Chargers in the first round since D.J. Fluker in 2013, and the first Northwestern player to be drafted within the first 15 picks since Chris Hinton (No. 4 overall, Denver) in 1983.

The entire conversation between Slater and Gelb can be accessed in the audio player above.