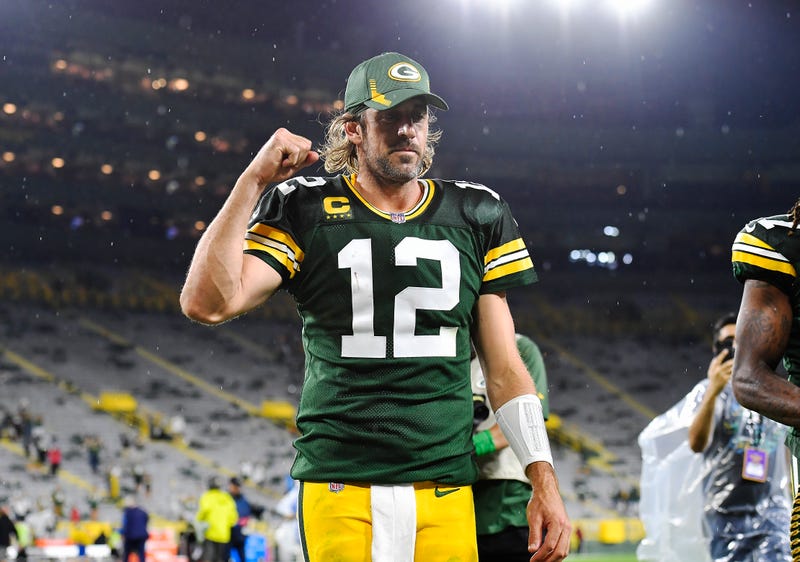 Aaron Rodgers delivered a primetime-worthy performance on Monday night, throwing for 255 yards and four touchdowns in the Green Bay Packers' 35-17 beatdown over the Detroit Lions before a sold-out crowd at Lambeau Field.

And since winning is a great deodorizer, it's still too early to rule out the possibility of Rodgers wearing green and gold next season, according to Packers writer and podcaster Andy Herman.

"I don't think it's a forgone conclusion [Rodgers leaves], no," Herman told After Hours with Amy Lawrence on Tuesday. "If I had to bet today, I think it's more likely than not that he's not with Green Bay next year. But this is going to turn a thousand more times before we get to ultimately what happens and where he could end up. Who knows.

"This is a player who almost retired this past offseason, maybe retirement is an option. Green Bay's salary cap is super intriguing. Jordan Love throws a wrench into a lot of things as well, So, there's so much up in the air. This next offseason is going to have a very unique drama to it, I'm sure. I guarantee you there's going to be a lot of turnover on this roster, one way or another..."

Rodgers' effort in Week 1 against the New Orleans Saints wasn't up to snuff. He threw for just 133 yards with two interceptions and no touchdowns, and his 36.8 passer rating was the fourth-lowest mark of his career. But the MVP version of Rodgers showed up against Detroit, as three of his four touchdown passes went to running back Aaron Jones.

During the third quarter, Rodgers moved into 10th place all-time on the career passing yards list (51,633), surpassing Hall of Fame quarterback John Elway. He also recorded his seventh career game with at least four touchdowns and an 80-percent completion rate. According to ESPN, only Drew Brees and Peyton Manning -- with eight games apiece -- have more in NFL history.

Green Bay (1-1) will visit the San Francisco 49ers (2-0) in a Week 3 matchup on Sunday night. According to FiveThirtyEight's projections, the Packers currently have a 59-percent chance to reach the playoffs, and a 53-percent chance to win the NFC North.

The entire Packers conversation between Herman and Lawrence can be accessed in the audio player above.