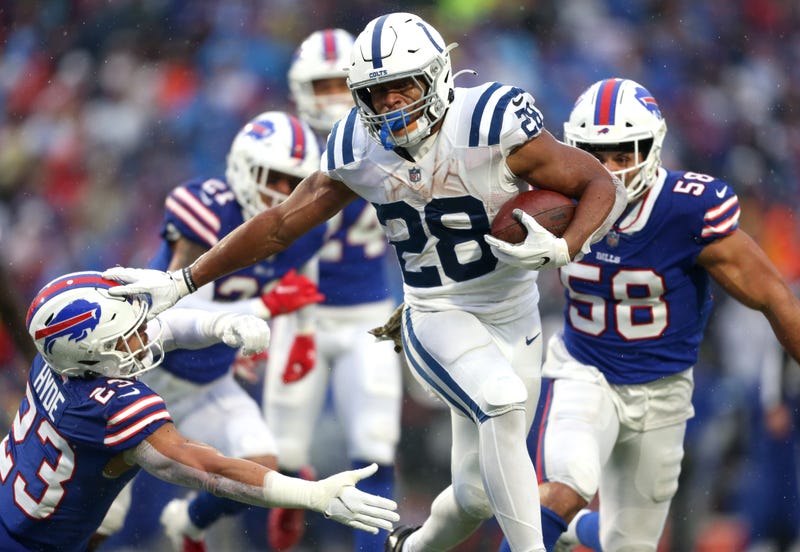 The Indianapolis Colts reestablished themselves as true playoff contenders on the road Sunday, as star running back Jonathan Taylor scored a franchise-record five touchdowns in the team's blowout win over the Buffalo Bills.

But should the Colts -- now over the .500 mark for the first time this season -- also be recognized as a championship threat if they either win the AFC South or clinch a wild card berth? JR isn't quite sold on the franchise's chances.

"When I think about the teams in the AFC, I don't know if the Colts have that dynamic of an offense," JR said during Monday's edition of the JR SportBrief show. "In the playoffs, when are they going to get over the hump? Where are they going to surprise you, where Carson Wentz is going to beat you with his arm? I don't see it happening...

"Even though they're fifth in scoring in the NFL, I don't know if they have that dynamic player who, week to week, is going to get you over the hump. And I don't know if Wentz is going to be the dude to throw you into that game. Let's not get all wrapped up in the Colts... The Colts have a great opportunity to go to the playoffs. But please, don't get hyped-up on them."

The Colts took command over the Bills from the get-go, scoring a touchdown with Taylor on their opening possession. By the end of the first quarter, they were ahead by 14 points, and entering the fourth, their lead increased to 31. Although Buffalo's ineptitude on offense was a major storyline, Taylor stole the show, rushing for season-high 185 yards on 32 carries with five scores.

As for Wentz, he wasn't asked to do much. He completed 11 of 20 passes for 106 yards with one touchdown -- the result of Taylor's performance on the ground. Through 11 games, the Colts rank 11th in the NFL in average yards, fourth in average rushing yards, fifth in average points, and first in turnover differential.

Indianapolis (6-5) will host the defending champion Tampa Bay Buccaneers (7-3) in a marquee Week 12 matchup on Sunday. According to FiveThirtyEight, the Colts currently have a 72-percent chance to reach the playoffs, but just a 7-percent chance to win the AFC South.

JR's complete thoughts on the Colts' playoff hopes can be accessed in the audio player above.