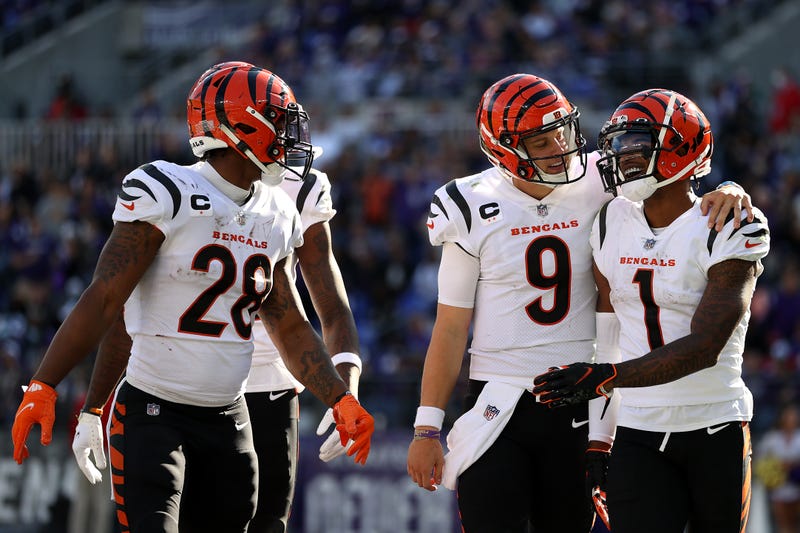 Behind a three-touchdown outing from second-year quarterback Joe Burrow and a 200-yard performance from rookie receiver Ja'Marr Chase, the Bengals haunted the Baltimore Ravens before Halloween, cruising to a 41-17 road win on Sunday at M&T Bank Stadium. With a 5-2 record, Cincinnati is in first place.

"Do I believe the Bengals are going to go forward and win this division? I'd still give this to the Ravens. But you can't ignore the Bengals... Let them get into the playoffs, understand friction, understand adversity as a winning team, and let's see how they come out after that... What have the Bengals done up until now? Nothing. Moved out of the trash can. They're a respectable team -- let's see them do it throughout the course of an entire season..."

Burrow, who's fully recovered from a knee injury that curtailed his 2020 rookie season, has resembled a true franchise quarterback this year. Through seven games, he's thrown for 1,956 yards with 17 touchdowns and eight picks, and on Sunday, he became the first opposing quarterback in history to throw for 400-plus yards and three touchdowns against the Ravens in Baltimore.

The Bengals finished the game with a season-high 520 yards of offense, and big plays factored into the margin of victory. Midway through the third quarter, Burrow connected with the rookie sensation Chase on an electric 82-yard score, stretching Cincinnati's lead to 27-17. Chase, the fifth overall pick in this year's draft, now has a 75-plus-yard touchdown in every game this season, and his 754 receiving yards are the most from a rookie through seven games.

Cincinnati (5-2) will visit the New York Jets (1-5) in a Week 8 matchup on Sunday, Oct. 31. According to FiveThirtyEight's projections, the Bengals currently have a 77-percent chance to reach the playoffs and a 41-percent chance to win the AFC North for the first time since 2015.

JR's complete thoughts on the Bengals and AFC North can be accessed in the audio player above.