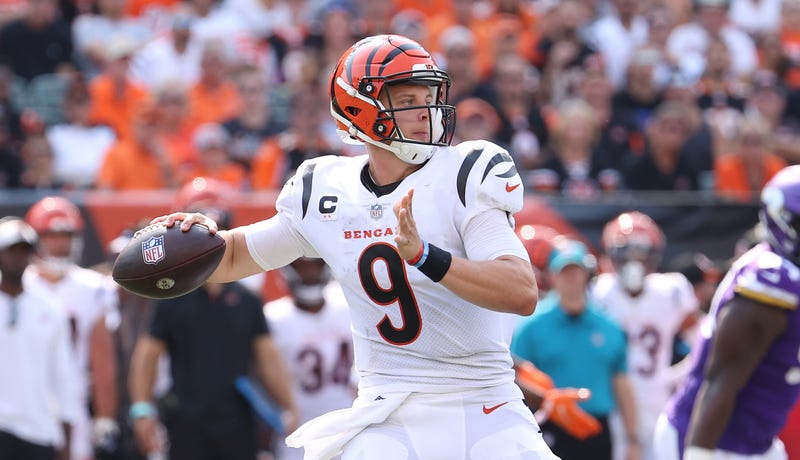 Joe Burrow's first game back since suffering a season-ending knee injury last November wasn't stress-free. Although he finished with 261 passing yards and two touchdowns in the Cincinnati Bengals' win over the Minnesota Vikings on Sunday, he was also sacked five times and hit seven times.

But Burrow's season-opening performance caught the attention of former franchise quarterback Carson Palmer. And he was impressed with Burrow's resilience in the pocket and the offensive line's overall protection.

"I was surprised about how much time he had in the pocket to throw the ball," Palmer told the Tiki and Tierney show on Thursday. "I was really concerned about the offensive line play, him coming off that injury and not being quite himself. Not having that fast twitch back, not having that quickness back in his feet. He didn't really need it in Week 1. He was able to step into a lot of throws. He had a lot of clean pockets, guys making big plays around him.

"But it's definitely something that concerns me going forward. As the season progresses, you lose your left tackle, you lose a center, you drop a guy, it's just not very deep. So, that's something I'm keeping an eye on. The better protection and pocket he has coming off this injury is going to be a saving grace for him... I just hope that they can keep him clean in Week 2, like they did in Week 1."

Perhaps Palmer was stunned by Burrow's protection because the Bengals' offensive line entered the season with low expectations. Before Burrow tore his ACL and MCL in Week 11 against the Washington Football Team, he had been hit 72 times through nine games. Since 2000, only New York Giants quarterback Daniel Jones had been hit more as a rookie through nine games.

Nevertheless, Burrow stepped up against the Vikings' defense, and made wise decisions at the line of scrimmage. With just 32 seconds remaining in overtime, Burrow audibled out of a 4th-and-short run play to set up a pass, and connected with receiver C.J. Uzomah for a 31-yard gain. One play later, Bengals kicker Evan McPherson drilled a 33-yard field goal to win it.

Cincinnati (1-0) will visit the Chicago Bears (0-1) in a Week 2 matchup this Sunday afternoon. According to FiveThirtyEight's projections, the Bengals currently have a 27-percent chance to make the playoffs, and a 12-percent chance to win the AFC North.

The entire football conversation between Palmer and Tiki and Tierney can be accessed in the audio player above.