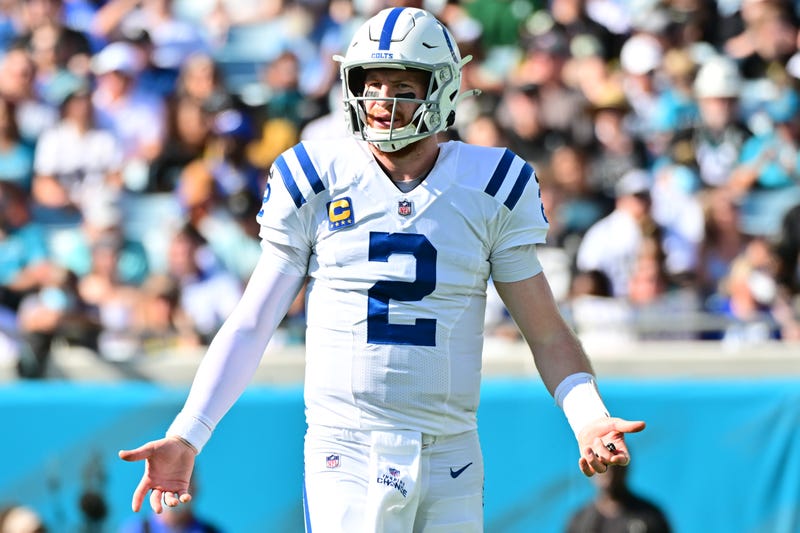 The Indianapolis Colts needed to win just one of their final two regular season games to clinch an AFC wild-card spot. Somehow, they catastrophically failed to do so, and suffered one of the most humiliating losses in recent memory.

For the seventh straight season, the Colts' road woes against the division rival Jacksonville Jaguars emerged, as they choked in a Week 18 stunner, 26-11, on Sunday at TIAA Bank Field. The loss eliminated Indianapolis (9-8) from playoff contention, and sparked further debate about Carson Wentz long-term future.

"Where the organization failed him is, they didn't allow him to reassert himself as the quarterback -- they just gave him the position," former NFL linebacker Brady Poppinga told the Reiter Than You show on Monday. "When they gave him the position, he was communicated, 'You're anointed as this unbelievably elite quarterback,' without having to do anything on the field to back that up.

"Then he sort of became an entitled player. It's not who he is, just what he was communicated from the Eagles... Lo and behold, they spoiled him, and that put him back, the entitlement factor. And then when he gets to the Colts, he's kind of in that same mode. There's this absolute grit, rigor, hardening that takes place when you have to compete... That's not where Wentz is at."

Wentz's regular season finale was a nightmare. Facing one of the NFL's worst defenses, the sixth-year starter completed just 17 of 29 passes for 185 yards with one touchdown and one interception. The 29-year-old also finished with a career-low 4.4 QBR (scale from 0-100), reaffirming that his MVP-caliber run in 2017 was simply an anomaly. In 17 games, Wentz threw for a total of 3,563 yards with a touchdown-to-interception ratio of 27-7.

By acquiring Wentz in a blockbuster trade with the Eagles last offseason, the Colts also took on the remaining dollars of his four-year, $128 million contract extension. According to Spotrac, Wentz' cap hit will range from $26.2 million to $28.3 million over the next three seasons, though no guaranteed money will be owed after 2022. Indianapolis could also cut Wentz and immediately save $13.3 million.