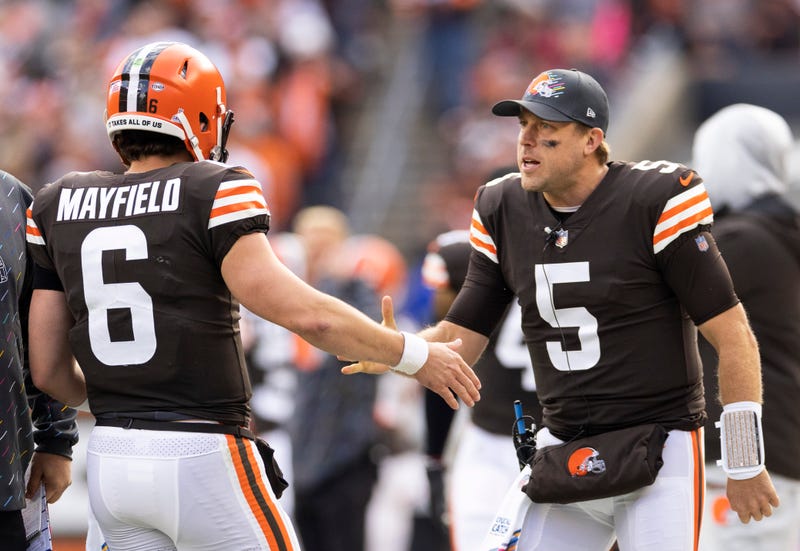 Cleveland Browns head coach Kevin Stefanski announced on Wednesday that star quarterback Baker Mayfield has been ruled out for Thursday night's game against the Denver Broncos with a torn labrum in his non-throwing shoulder. Veteran journeyman Case Keenum will get the start in his place.

It's unclear how much time Mayfield could miss. He initially suffered the injury back on Sept. 19, when he tried to make a tackle against the Houston Texans. Although he battled through the pain and wore a harness on his shoulder for support, he reaggravated the injury against the Arizona Cardinals on Sunday.

"Case Keenum, who's going to be replacing Baker, he can sling it all over the field. He moves really well, he fits Stefanski's scheme," former NFL linebacker Brady Poppinga told the Reiter Than You show on Wednesday. "I don't know if there's going to be that much of a drop-off. There's going to be a drop-off, because you've got backups in there. But their scheme is set up for guys that are backups -- as history has proven -- to step in and play very well..."

Mayfield's absence will snap a streak of 51 regular season starts that began in Week 3 of the 2018 season. To make matters even worse, Cleveland will also be without star running backs Nick Chubb and Kareem Hunt on Thursday due to calf injuries, and starting offensive tackles Jack Conklin (knee) and Jedrick Wills Jr. (ankle) didn't practice on Monday or Tuesday.

Through six games, Mayfield has completed 67.1-percent of his passes for 1,474 yards with six touchdowns and three interceptions. According to ESPN, Mayfield was advised against playing on Thursday by team doctors, and the Browns hope he'll avoid season-ending surgery.

Cleveland (3-3) and Denver (3-3) are scheduled to kick off at 8:20 p.m. ET on Thursday. According to FiveThirtyEight projections, the Browns currently have a 49-percent chance to reach the playoffs and just a 12-percent chance to win the AFC North.