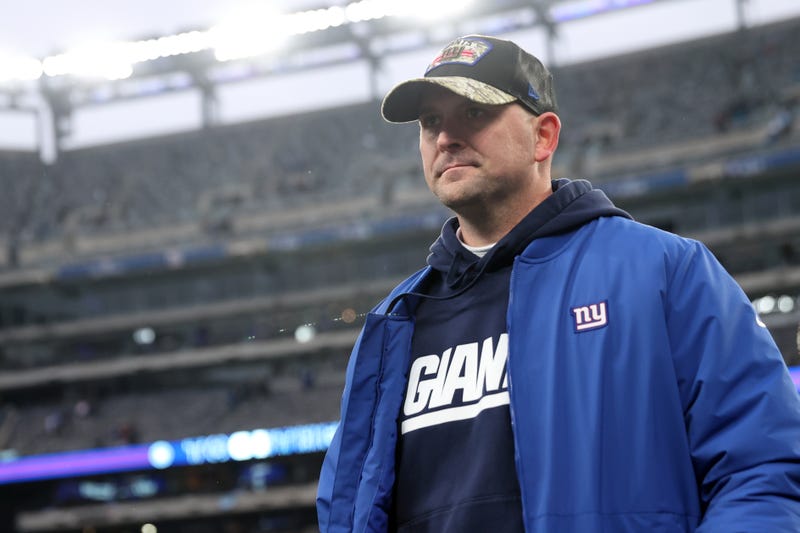 The New York Giants' regular season finale against the Washington Football Team on Sunday afternoon looked like two slugs trudging through the mud, struggling to reach the long-awaited finish line. Images of the few loyal fans with paper bags on their heads, empty seats throughout the stadium. A well-deserved representation of the most recent stretch of embarrassing football from the franchise.

As third-string quarterback Jake Fromm mercifully ended the 2021 season, surrounded by no-name backups -- in similar fashion to a clueless reserve point guard -- all fans could ask themselves is, how did it get to this point? Surely cheap liquor in the parking lots numbed the pain better than a free, lukewarm Pepsi. But even $6 tickets weren't enough to lure New Yorkers away from a lazy day, consisting of comparably priced cheap takeout and Netflix binges.

So maybe the fish does in fact stink from the head down. But the person in charge of the organization is John Mara, not Joe Judge. And evidently, the head honcho put his head coach in a plane with one engine, and told him to fly cross-country. Surely, not even the Bill Belichick's of the world could win with the patchwork, arena football roster that's been assembled.

Although Judge has been the bullseye on the Giants' dartboard and an easy scapegoat, he shouldn't be shouldering most of the blame. Maybe he hasn't won over the increasingly disgruntled fans with eye-rolling comments during press conferences, but what is this team's identity?

Three years in with quarterback Daniel Jones, and the organization has been hesitant to commit to him like a longtime fiancé, unwilling to give their future spouse a front door key. Saquon Barkley has been overused, and none of the promising skill players have blossomed into bona fide pieces. Their offensive line has been given many makeovers -- countless plastic surgeries -- yet still gets trampled like a pair of beaten-down traffic cones.

Save the argument about winning more games if Jones had stayed healthy for another year. His rollercoaster ride of inconsistency on the field has made him less dependable than that friend who regularly shows up late to dinner plans. Naturally, the franchise is rationalizing giving him endless rope of leeway, but it's impossible not to expect more of the same.

The Giants ranked a ghastly 31st total offense, second to a Houston Texans team that came into the season focused on mitigating damage control, not even trying to win. Offensively, they averaged a measly 99.3 yards per game on the ground. Clearly the Giants would've been better off taking Buffalo Bills quarterback Josh Allen in the 2018 draft over Barkley, but they regrettably felt that Eli Manning's career could be prolonged with a workhorse back. And if breaking the golden rule of taking a running back in the top-five doesn't sting enough, three-time Pro Bowler Nick Chubb was available one round later.

To his credit, Giants defensive coordinator Pat Graham's unit has stepped up, but with no assistance from the offense, they've been forced to spend entire games on the field. Blossoming star safety Xavier McKinney, linebacker Tae Crowder, and defensive end Leonard Williams are owed a formal apology by the clown show of an offense. If emotions aren't running high in the locker room, something's wrong.

The utter incompetence in roster building explains why the organization has gone through previous head coaches Ben McAdoo and Pat Shurmur like pairs of hand-me-down socks. Both guys had their shortcomings, but neither was put in a position to succeed. They simply became the ragdoll, punching bag for all team failures.

"The important thing with what happens, any lesson you learn, is that you move forward with it and make the right decisions going forward with the information that you gathered," Judge said after Sunday' loss. Maybe he's learned his lesson about not running quarterback sneaks on 3rd-and-9, but really, that message should've been echoed in the owner's box.

Unfortunately for the few studs on the roster who've played their hearts out, the dark gray cloud lingering over East Rutherford doesn’t seem like it'll give way to gleaming sunshine anytime soon. The Giants have few building blocks on the roster, and no definitive plan for future success. A front office that was insistent on being in win-now mode has no pieces to actually put victories in the win column.

One could say the most recent stretch of Giants football has been a wave of nightmares, in need of a dream catcher to stop the middle of the night, cold-sweat terror. In reality, it's been a punchline of bad analogies.