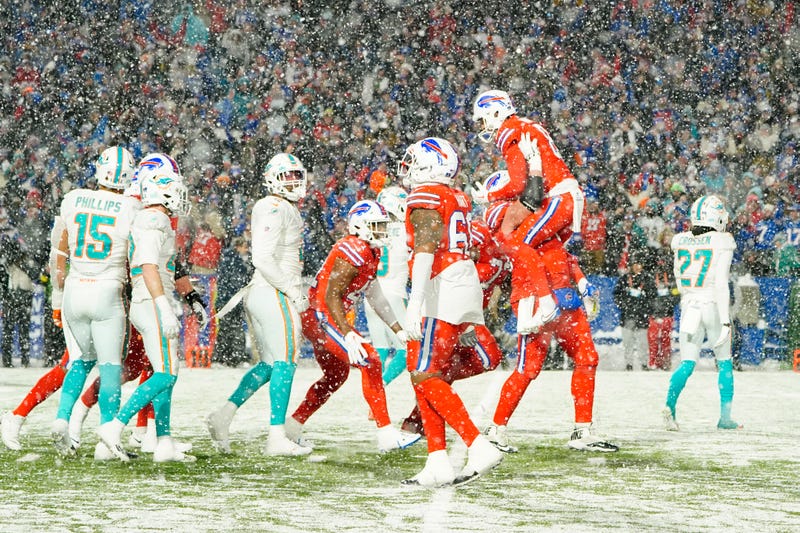 The NFL's opening double-dip weekend didn't lack in theatrics, close games, or four quarters of constant drama. Although 13 of the 15 games were won by single-digits, the slim margins of victory should reaffirm this fact: teams either head home victorious, or travel home disappointed after defeat.

Only one huge upset -- the Jaguars' 40-34 win over the Cowboys that came on an overtime pick-six -- happened in Week 15. But, the scoreboard would indicate that the Dolphins, Bears, and Texans came close. We'll also give an honorable mention to the Colts, which suffered the biggest collapse in NFL history by blowing a 33-point lead against the Vikings and losing, 39-36.

Regardless of the commendable efforts all four aforementioned squads put forth, there shouldn't be any moral victories. Expecting the Texans to upset the Chiefs, the Dolphins to outlast the Bills, or the Bears to beat the Eagles wasn't realistic. But, the reality is, each team had the opportunity to pull off the improbable outcome. Yet, they blew their chances at doing so. The Patriots and Titans also had tough losses to inferior opponents.

Leave the second-place silver trophies for flag football and two-hand touch leagues. In a professional sport, where teams get just 17 chances to strap it up, every time one finishes second, it should feel like a missed opportunity. The strength of an opponent should never serve as an excuse or reason for rationalizing defeat, either, since players are paid handsomely to be at peak performance. And teams have down weeks all the time. With playoff berths and contracts at stake, few are interested in half-hearted pats on the back.

While those who'll be packing their uniforms and banners in a couple weeks can take pleasure in watching their team put up a fight, there's no reason for them to find any satisfaction in defeat. In particular, Texans fans shouldn't be breathing a sigh of relief in knowing they're more likely to get the No. 1 draft pick, and presumably the rights to Alabama quarterback Bryce Young.

Since 2017, there's been a repeat selection in the coveted No. 1 spot twice. The Jaguars selected first in 2022, despite taking Trevor Lawrence the year before. The Browns took Baker Mayfield in the spring of 2018 -- 12 calendar months after selecting generational edge-rusher Myles Garrett first-overall.

Mayfield is on his third squad, after a relatively successful stint in Cleveland, and Lawrence has a long way to go to prove he's the can't-miss prospect he was once made out to be. Now, this isn't to say that Lawrence can't blossom in 2023. But recent results indicate that NFL draft position doesn't necessarily correlate with instant success.

The excitement of potentially being able to select a top player from this year's prospect class provides reason for future optimism. But this shouldn't detract from the reality that most struggling NFL teams are more than one piece away from success. Expecting results to translate between levels and provide an instant impact seems far-fetched. So no single loss should be taken lightly, even in a lost campaign.

NFL fans employing the mindset that their teams were one or two plays away from winning a game shouldn't be considered an outlet for happiness, either. The bottom line is this: teams either win, or have a ways to go if they want to pull out a victory the following week.

For the Jets, which lost by three points to the Lions in Zach Wilson's return, no positives can confidently be extracted from a defeat that hurt the team's chances of reaching the playoffs for the first time since 2010. Regardless of the building blocks that'll serve as foundation for pulling out a win next time around, the NFL is a rags-or-riches type of league. Silver medals carry zero weight in contests with two teams involved.

In a team sport that has a winner and loser, the scoreboard is responsible for telling the entire story, while dictating how those involved should feel. Throw the idea of winning and losing "cheaply" out the window. While the increase in entertainment value is welcomed with open arms by NFL fans, who crave intriguing December matchups, the number of close finishes should serve as a stark reminder that some teams are in good standing, and others are still far away from where they need to be.

We strive to be a platform where varying opinions may be voiced and heard. The views, thoughts, and opinions expressed by the author(s) of this article and/or by those providing comments are theirs alone, and do not represent those of Audacy, Inc. We are not responsible for any damages or losses arising from this article and/or any comment(s).
Featured Image Photo Credit: Gregory Fisher-USA TODAY Sports