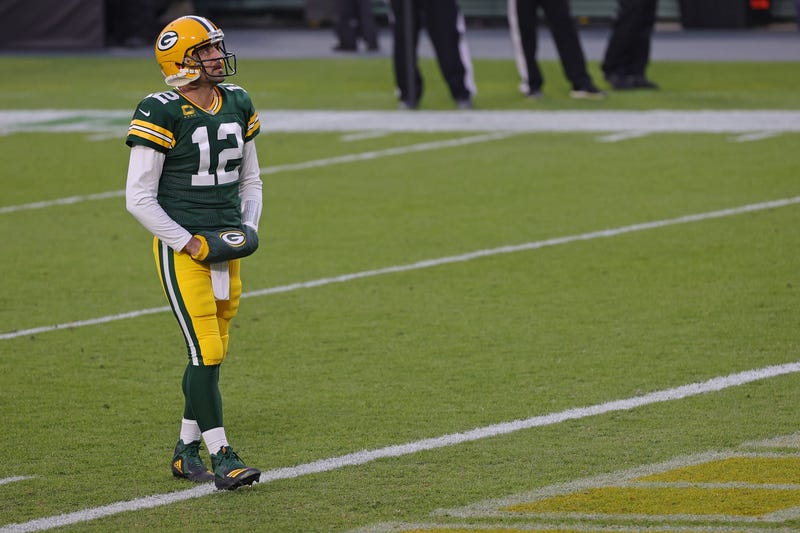 Aaron Rodgers' disdain toward the Green Bay Packers has festered, and his Hall of Fame predecessor doesn't believe the reigning league MVP is bluffing about a holdout this season.

In the latest episode of the "Bolling with Favre" podcast, former Packers quarterback Brett Favre shared his thoughts on Rodgers' dramatic rift with the organization, and contended that the 37-year-old veteran "ain't budging" if he truly holds a grudge against Green Bay.

During Wednesday's show, Tiki and Tierney discussed Favre's recent comments, and whether they actually want to see Rodgers leave his longtime team.

"Is this something we actually want to see? I don't," Tiki said. "From a sports talk radio standpoint, it's great for our job. If he ends up going someplace else, we now get to speculate about how good the Denver Broncos are going to be if Aaron Rodgers is their starting quarterback. Maybe I'm a prisoner of continuity, and I like to see greatness fulfilled where it's supposed to be. So, I almost don't want to see this happen, even though it seems like it's increasingly becoming an inevitability...

"Look, at the end of the day, when and if Aaron Rodgers returns to the Green Bay Packers, and Aaron Rodgers is a stud like we know Aaron Rodgers is, they're not going to be booing him at Lambeau Field for the 2021 season. But this offseason drama, it's not something you can just ignore. You think about how close this team has been over the last couple of years, almost getting to a Super Bowl, and a big part of that is Aaron Rodgers. You don't want drama. The last thing you want is acrimony..."

While Tierney agreed with Tiki's sentiments, he couldn't help but wonder about Rodgers closing out his career in a different uniform.

"Jeez, can you imagine him trotting out of a tunnel in Week One wearing a Raiders helmet, in front of 70,000 people at the new Black Hole in Las Vegas?" Tierney said. "Or in Denver, playing against the Chiefs in a divisional matchup? Can you imagine? I hope Packers fans don't take it the wrong way, but that part of me? Hell yeah, sign me up... I think I'd be more resistant to this if I wasn't callous to this happening before. Alright, Peyton Manning going to Denver. Tom Brady going to Tampa. Like we've seen recently, this is the new NFL.

"So, if it's not this year -- you would imagine it's definitely going to be next year -- you just get the sense that, as long as Aaron Rodgers wants to keep playing into his late 30s, early 40s, he's going to play somewhere other than Green Bay... To me, [Rodgers in a new uniform] makes the NFL much more interesting. Because, number one, we get to see Act II for a different team, but we also get to see [Packers former first-round quarterback] Jordan Love..."

According to a recent report from ESPN's Dianna Russini, there's a growing belief around the league that Rodgers isn't going to play for Green Bay in 2021, and that Denver is the favorite to acquire the reigning league MVP, should he be made available in the coming months.

Russini's news came four days after NFL Network's Ian Rapoport reported that Rodgers is seriously considering retirement as an option unless the complicated situation with the Packers is "repaired to his liking."

The entire Rodgers-Packers conversation between Tiki and Tierney can be accessed in the audio player above.