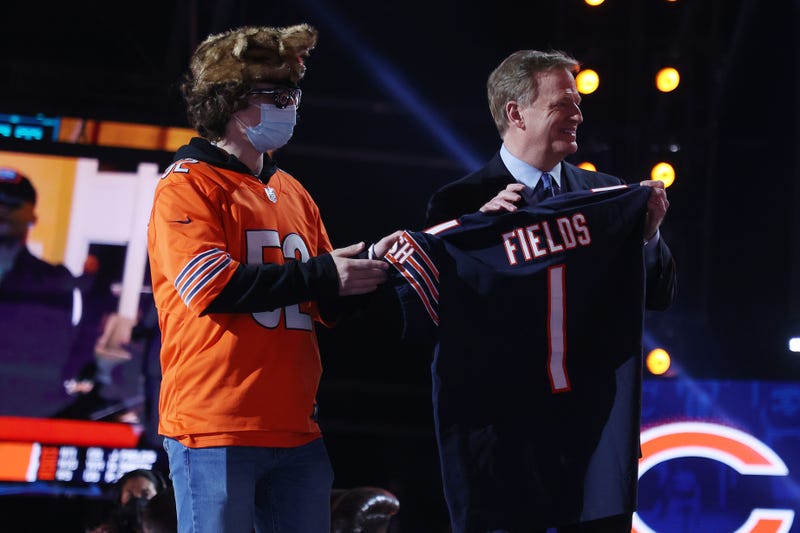 The Chicago Bears are no stranger to disappointing quarterbacks. They've drafted 31 in total since winning their lone Super Bowl in 1986, and during the era of the 16-game schedule (1978-2020), they were the only NFL team that didn't have a single quarterback throw for 4,000 yards or 30 touchdowns in a season.

But the Bears' stunning decision to trade up for Ohio State quarterback Justin Fields with the No. 11 pick in this year's draft has given fans a renewed sense of optimism. And according to CBS Sports NFL draft analyst Chris Trapasso, there's reason for excitement.

"It was a necessary move that they needed to make, and I really applauded them for doing it," Trapasso told the Reiter Than You show on Tuesday. "I didn't think from pick No. 20 overall they were going to be able to do that, but as they saw Justin Fields fall, they made that ascension. And with [general manager] Ryan Pace and [head coach] Matt Nagy really on the hot seat, they need to make the playoffs and maybe even win a playoff game to keep their jobs. And to just fortify that quarterback spot for the first time in seemingly forever, it was the correct decision.

"There was no reason for Justin Fields to fall -- even to pick No. 11. He was an elite quarterback prospect. So, there were a lot of other teams -- the Washington Football Team, the New England Patriots -- that were kind of rumored to be a club that would move up to pick Justin Fields, but it was ultimately the Bears. So, I applaud them for making that ascension."

Fields, who surprisingly fell out of the top-10, was the third-overall prospect on Pro Football Focus' NFL Draft Big Board. Due to the pandemic and a restructured Big Ten conference schedule, the 6-foot-3, 228-pounder only played in eight games this past season. But, Fields made the most of his opportunities on the field, as he threw for 2,100 yards and 22 touchdowns, rushed for five scores, and led Ohio State to a national title game appearance.

Although the price for Fields was steep -- Chicago yielded the 20th overall pick, a 2021 fifth-round pick, and first- and fourth-round picks in 2022 to the New York Giants -- they now have their quarterback of the future. And Trapasso believes this move helped spark the Bears to crush the entire draft.

"I think the Bears had the best draft of any team in the NFL," Trapasso said. "And it's not just about Justin Fields, although that can't be overstated -- how important that is -- because as we've seen for many teams around the league, getting the right quarterback can turn around your franchise. Look at the Buffalo Bills, and Josh Allen getting to town and by year two, he took the next step, and then last year, the Bills had a fantastic season, got all the way to the AFC title game.

"They've added pieces around him, but Josh Allen is the foundation of that team. So, if the Bears found that with Fields, I think they will take off in the NFC North... I think from Round 1, all the way to Round 6 and even Round 7, the Chicago Bears upgraded their team better than any other team in the NFL."

In early April, Pace told reporters that veteran Andy Dalton, who signed a one-year with Chicago as a free agent, would be the team's starting quarterback to begin the 2021 regular season. Whether or not the Bears stick to this plan remains to be seen.

The entire NFL Draft conversation between Trapasso and Reiter can be accessed in the audio player above.