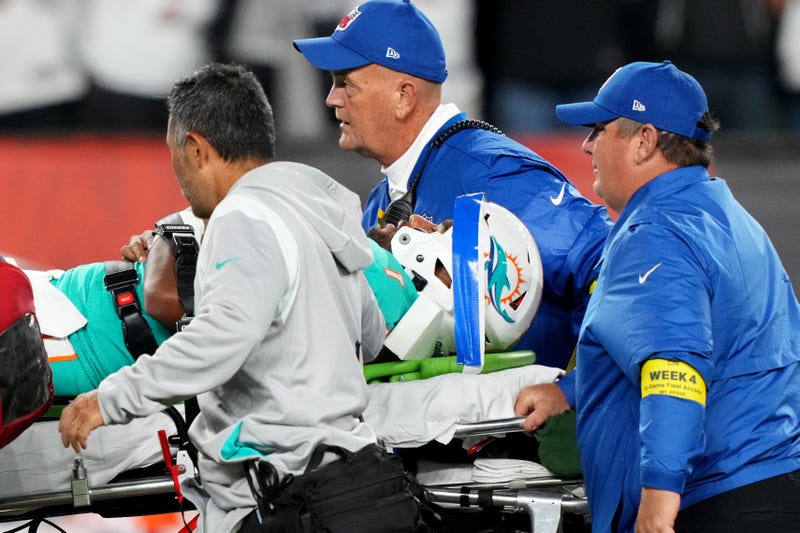 To say watching Tua Tagovailoa get injured almost 96 hours after the Dolphins were investigated for a breach of concussion protocol was difficult, would be an injustice to him and his family. Nauseatingly predictable is a more sufficient terminology, which speaks to how the NFL's continuous mishandling of similar situations has jeopardized the long-term health and safety of those who play football. The league's inability to protect those playing the game should lead to many weighing the upsides of football, with the downsides of suffering life- altering injuries.

Anyone with a pair of eyes who passed high school biology knew Tagovailoa had no business being on the football field after stumbling around in Miami's home win over the Bills on Sept. 25. So, when he sustained another apparent concussion just four days later -- this one perhaps more gruesome -- it wasn't surprising when many ex-players spoke out. Others reached for the TV remote to change the channel, disgusted by the mishandling of the situation. No one could blame them for their disdain, either, as the incident hit close to home.

An NBC Sports study published in July found the average NFL player makes $2.7 million per year. Players are represented by the NFL Players Association, which renegotiates a new Collective Bargaining Agreement, thus raising that number every few seasons. When considering that many players earn above the leaguewide average, that's a pretty hefty sum of money. Especially when accounting the salaries of those working in other professions.

Consider Tagovailoa, for example, who signed a top-heavy $30.2 million deal across four seasons, after being drafted in 2020. Assuming that he proves to be Miami's franchise quarterback, he'll be in line for a pay raise that averages upwards of $25 million a year. And if the Dolphins decide to pick up his fifth-year option for 2024 without signing a long-term extension, they'll pay him a salary in that neighborhood.

It's understandable why Tagovailoa would risk his safety for generational wealth, and money that could set him and his family up for life. But if he's jeopardizing his wellbeing, is it really worth it? NFL retirees' struggles with head injuries have long been documented in lawsuits, media, and also the film “Concussion," based on the findings of Dr. Bennet Omalu. The league, teams, and NFLPA have publicly tried to increase player safety with various measures. Yet, somehow, it seems like they always return to square one --desperate for answers on yet another case of ignorance.

In the NBC Sports story about player safety, author Charlotte Edmunds notes that, "roughly 16% of retired football players end up bankrupt within 12 years of stepping off the field for the last time.” League players also die earlier than professional athletes from other sports, studies have found.

The combination of inadequate funds for those unfamiliar with managing large sums of money, coupled with shorter lifespans, really makes one question the risks and rewards of playing football. For the teenagers being recruited to top collegiate programs across the country, the rewards of escaping poverty and providing a higher quality of life for themselves is deemed worthwhile. When these same people suffer from a myriad of health issues long after their days of playing end -- health issues that impact day-to-day functionality -- it's easy to wonder if the correct decision was made.

Many people questioned why seven-time Pro Bowler Luke Kuechly decided to retire after the 2019 season, in which he recorded his third-highest tackle total with 144. Others criticized Calvin Johnson for calling it quits after his age 30 season, when he still appeared to have plenty of football left. In hindsight, the get-in, cash-in on a second contract, and get-out approach seems to pay dividends. It allows players to make sufficient money, develop a brand in the league, and then retire before it's too late.

In some sports, overstaying your welcome is viewed as the norm. But sports like baseball aren't nearly as physically taxing. Thus, juicing the lemon doesn't have nearly as costly results. In the NFL, more than a few seasons is already too many, and playing a couple more can yield catastrophic results. Although every NFL player is one play away from a freak injury, they endure a series of more minor injuries, due to the violent nature of the game.

The stark reality is that, as long as guys strap on helmets with the objective of tackling one another, football will be an inherently violent sport. Which isn't to say people shouldn't enjoy it. Saturdays and Sundays in the fall have become comparably important to religious holidays. As America's most popular sport, the NFL will always enjoy its time spent in the driver's seat for entertainment. But those doing the actual entertaining need to think long and hard about the impact the game is having on them.

We strive to be a platform where varying opinions may be voiced and heard. The views, thoughts, and opinions expressed by the author(s) of this article and/or by those providing comments are theirs alone, and do not represent those of Audacy, Inc. We are not responsible for any damages or losses arising from this article and/or any comment(s).
Featured Image Photo Credit: Kareem Elgazzar-USA TODAY Sports