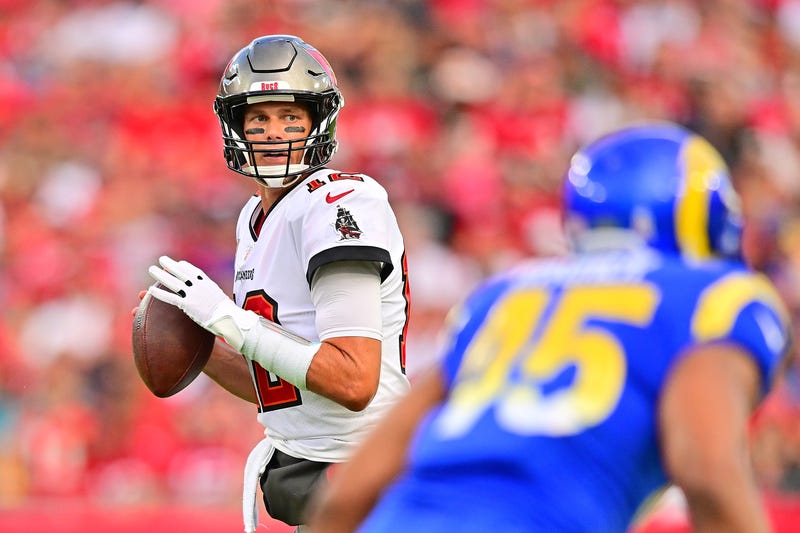 Aaron Rodgers likes to tell himself -- and portray -- that he's the smartest guy in the room. Hell, look no further than his quest to be the host of "Jeopardy!" -- a quiz show built on the ultimate intelligence. A quarterback from California, the man worthy enough of hosting a TV show that preaches the highest level of intelligence?

I brought up "Jeopardy!" because we shouldn't be shocked by the downfall of Rodgers -- yet, we all are. And even I thought, before Green Bay's road loss to the Lions last week, they'd still win enough games to reach the playoffs. I was wrong, we were wrong. The 2022 Packers are dead, and the peak eliteness of Rodgers' career is dead with it.

Rodgers knew best, though -- as he always did -- thumbing his nose at taking any preseason snaps with his new receivers. Did Patrick Mahomes thumb his nose at a similar scenario? No, and the Chiefs keep on rolling. Rodgers hardly portrays himself as a pick-me-up type of leader on the sideline.

Rodgers is, in essence, a frontrunning player. When the going's good and the attention is on him, he loves it. When the going's bad, it's everyone's fault but his following losses. Rodgers has just one championship ring, and it once felt like a disappointment. Now, it feels just about right.

No. 1: Are the Colts pseudo-tanking? Sam Ehlinger has looked anything but a potential solution at the evasive quarterback position. By playing Ehlinger, the Colts don't look capable of winning more than a game or two the remainder of this season. The easiest way for Indianapolis to solve the quarterback issue is to shoot to the top of the 2023 draft.

No. 2: Jeff Saturday as the interim head coach is yet another element to the Colts tanking theory. Team owner Jim Irsay is either very dumb, or very smart. There's no way Saturday can win over the Colts locker room and win a bunch of games in the second half of this season. And Irsay has to know this, right? In the meantime, I guess he's selling fans on a franchise legend coaching the team while he tries to get the first-overall pick and strike gold, like he did with Peyton Manning and Andrew Luck. There's the possibility he thinks Saturday rallies the team -- in which case, he's an idiot.

No. 3: All the Vikings do is win -- ugly wins are still wins. And at 7-1, the NFC North race is effectively over. Justin Jefferson has found the end zone again, and Minnesota's defense continues to swarm up front. Many will point to the Vikings' road loss to the Eagles as a reason not to believe, and we'll make the classic Kirk Cousins primetime jokes. But, we all can admit that it's beginning to feel a little different when watching this Cousin-led team.

No. 4: This Jets defense will put them in a position to win every single game. Pro Football Focus has them ranked as the league's best unit. Sauce Gardner may be the Defensive Rookie of the Year, and Robert Saleh was the coach of the great 49ers defense that made a Super Bowl run back in 2019. As long as Zach Wilson doesn't turn the ball over, these Jets could be a dangerous team to see in the playoffs.

No. 5: Tom Brady was pumped up following his last-second touchdown pass and win over the Rams. It had been an emotional week on top of an emotional year for Brady. However, he missed a ton of passes and saw a bunch of drops from receivers. What happened Sunday was nothing more than Tampa looking at another fraud contender, seemingly in worse shape. 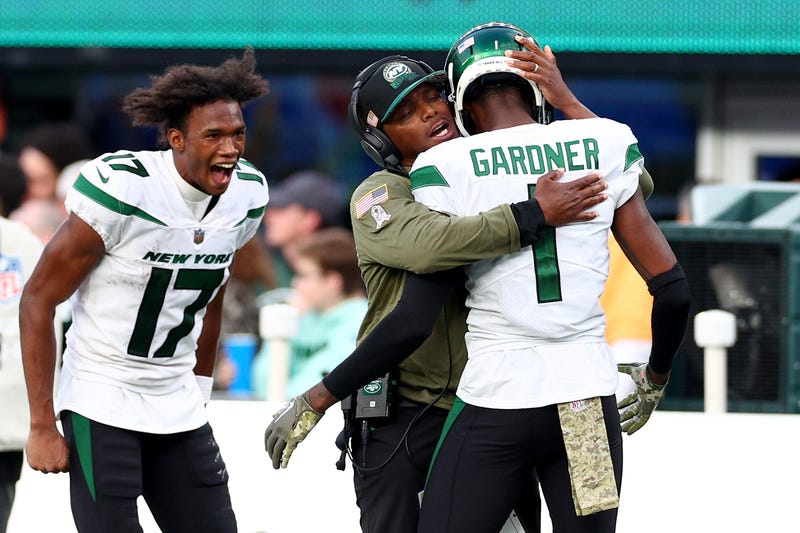 No. 6: Justin Fields has been unlocked. The Bears aren't afraid to let him run, and adding the passing threat of Chase Claypool can only help Fields ascend. In September, he looked like a quarterback Chicago might've moved on from. Now, he may be the best signal-caller out of the 2021 draft.

No. 7: The Raiders have blown four -- yes, four -- 17-point leads this season. Josh McDaniels as head coach has been an utter disaster. They went from a playoff team in 2021 to one of the worst AFC teams in 2022. And in a season that's more wide open than we thought, the failure is beyond unacceptable.

No. 8: The Chargers are the third team in NFL history to trail by double-digits in four straight games. Luckily, their comeback against Atlanta ended in a win. They'll now play back-to-back Sunday Night Football games, after some NFL Flex scheduling. And I can't help but wonder: am I the only one who doesn't find the Chargers all that interesting on a week-to-week basis?

No. 9: These Cardinals are a dumpster fire. Penalties don't stop mounting in- game. Their offensive line can't block anything. And Kyler Murray looks more like a child than a leader with his weekly sideline arguments. Arizona may be screwed, financially, considering the money and deals they gave Murray and head coach Kliff Kingsbury.

No. 10: The Texans had the Eagles tied at 14-14 last Thursday, showing that in the NFL, we should never assume dominance. Sure, the Eagles pulled ahead, but this is life in the league this year. The Cardinals started 7-0 in 2021, look at them now. Now, these Eagles aren't those Cardinals. But, last Thursday was a sign: this season is far from decided. 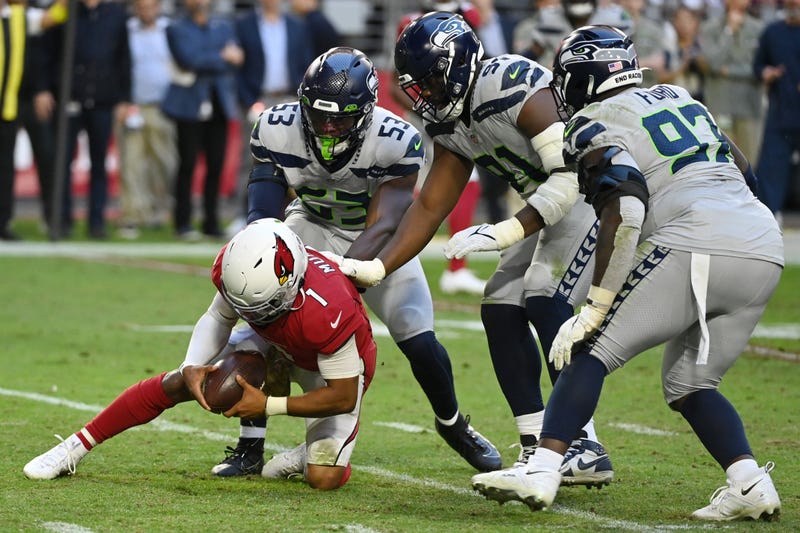 Cowboys at Packers: These Packers are dead and buried. But the reason this game remains in my top-five is that most of the nation will watch it in the late 4 p.m. TV window. We've seen Rodgers wilt against great pass rushers all year. Now he has to face the Cowboys' vaunted front? We might witness the career funeral for Rodgers on Sunday at Lambeau.

Commanders at Eagles: Monday night was supposed to be Carson Wentz' return to Philadelphia. Instead, the Eagles will put their undefeated 8-0 record on the line against a suddenly spunky Commanders team. Washington's still in play for an NFC wild-card spot at 4-5, but they can't afford many more losses. Taylor Heinicke makes their offense fun because he actually throws passes to Terry McLaurin. Philly will eventually slip up, division games are never easy.

Chargers at 49ers: The 49ers come out of their bye week at 4-4, as a team looking to chase down the Seahawks for the NFC West title. We saw what Run CMC was able to achieve two weeks ago. The Chargers have trailed by double digits in four straight games, yet they keep pocketing wins -- despite looking nothing like what we expected from them in the preseason. The winner of this Sunday night game will feel really confident about the second-half stretch.

Vikings at Bills: The Vikings are somehow traveling out east to Orchard Park with a better record than the Bills. This is a big game for Stefon Diggs, playing his former team. After falling to the Jets at MetLife last week, Buffalo needs a quick bounce-back at home to avoid a losing streak and questions about their division title hopes. But can the Vikes earn their biggest win to date and make everyone consider them a real Super Bowl contender?

Seahawks at Bucs: Germany, of all places, gets the best matchup of Week 10. You'll have to wake up by 6:30 a.m. local time in Seattle to see the start of this game, that's a rough ask for one of this magnitude. Are the Bucs about to breathe a sigh of relief and get right as they bond in Munich? Or, will Kenneth Walker and Geno Smith take down Brady and send Tampa back to reality? 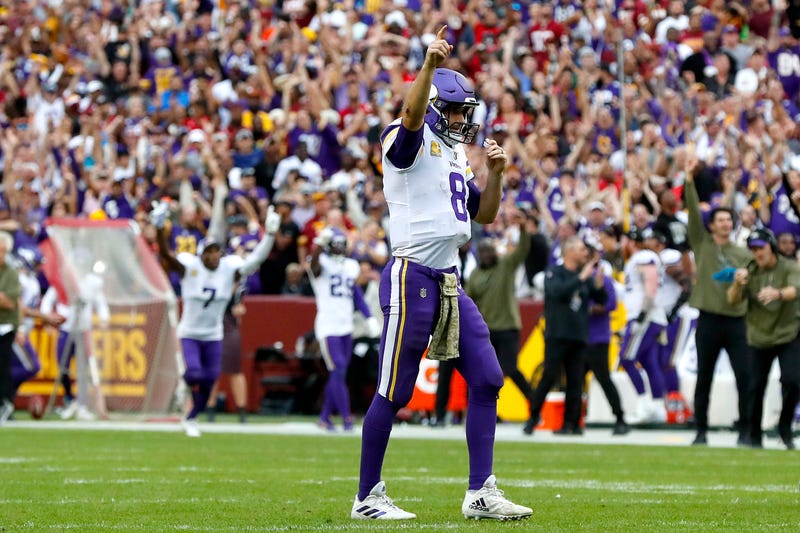 Chiefs (-9.5) vs. Jaguars: Stock up for Trevor Lawrence following the Jags' comeback win against the Raiders. There might be a bit of a stock-down feel on the Chiefs, since they needed overtime to beat the Malik Willis-led Titans. Kansas City hasn't always been a cover-machine in the Mahomes era, and 9.5 is admittedly a big number. The Jags' secondary isn't great, there'll be plays to be had by Mahomes. On the flip side, Lawrence entering an eclectic, buzzing Arrowhead could crumble him, and force a bad turnover or two. Chiefs coach Andy Reid knows all of Doug Pederson's tendencies as a coach. Remember, it was Reid who got Pederson his first head coaching job, with the Eagles.

Dolphins (-3.5) vs. Browns: Deshaun Watson's return is coming soon, but with Jacoby Brissett still at quarterback, the Browns have no chance to win a shootout against the Fins. They may be able to have success on the ground, after seeing what Justin Fields just did last week. In this case, though, I think the Browns will have too much to handle on the defensive side, as the Miami receivers can make plays all day long.

Commanders (+10.5) at Eagles: Too many points. Too many points. Too many points. Getting this spread over 10, with the hook, is of course the key here. Division games can always be played a bit tighter, and Washington has played close games with Heinicke under center. The Commanders' defensive front also presents a tough matchup for Jalen Hurts, who might not be able to have his way. We just watched the Texans cover a big spread against the Birds last week. Asking Philly to blow out a divisional rival beyond 10 is too much.

Now, Doritos may be a little thin. So under the weight of nacho toppings, they could crumble. Make sure to evenly distribute the nacho toppings across the pan when baking. Bake these in the oven for about eight minutes. Remember, since Glorious Splat from Twitch needs every single detail spelled out for him, please cook the seasoned beef before baking it on the Nachos.

We strive to be a platform where varying opinions may be voiced and heard. The views, thoughts, and opinions expressed by the author(s) of this article and/or by those providing comments are theirs alone, and do not represent those of Audacy, Inc. We are not responsible for any damages or losses arising from this article and/or any comment(s).
Featured Image Photo Credit: Julio Aguilar / Stringer / Getty Images