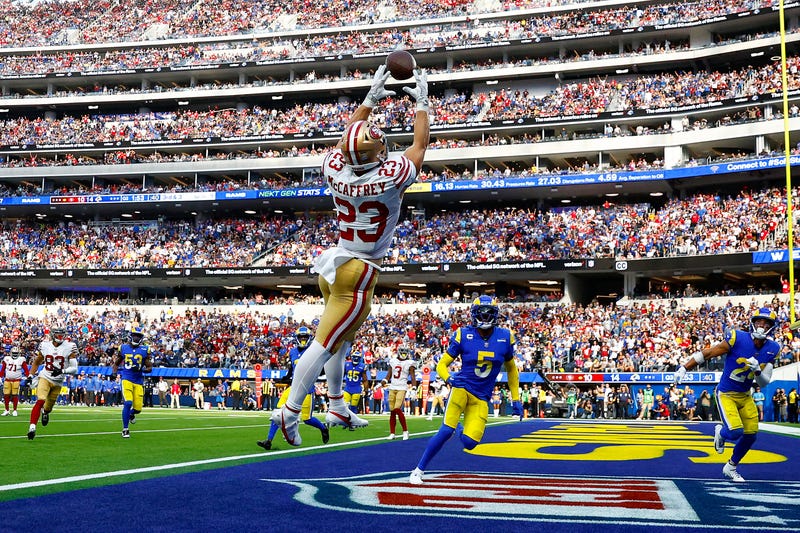 Aaron Rodgers told "The Pat McAfee Show" this week that the Packers have no moral victories. They covered the 10.5-point spread in their loss to Buffalo on Sunday. But the fact they were underdogs by this amount speaks volumes about how quickly the roster and franchise has fallen since falling to the 49ers in the divisional round. Green Bay was unable to add at the trade deadline and now with a 3-5 record, they look like the furthest thing from a playoff team.

We're a long way from this reality, but ponder this: Was the Packers' divisional round loss to San Francisco the last playoff game at Lambeau Field for a long time? Was it the last playoff game of Rodgers' career? These questions might seem crazy, but they may be reality, after the team didn't add anything to their sinking ship on Tuesday.

No. 1: The Bears accomplished two things by acquiring Chase Claypool from the Steelers. First, they blocked the Packers from getting better -- and dare I say, competitive. Secondly, they're giving Justin Fields a legitimate chance to prove that he should be Chicago's starting quarterback moving forward.

No. 2: The Dolphins turned three draft picks they got from San Francisco two years ago into Bradley Chubb, Jaylen Waddle, and Tyreek Hill. Now comes the most important step: using the star power to actually beat the top dogs ahead of them. Both the Bills and Chiefs sit atop the AFC, and Miami did beat Buffalo when healthy. But, expecting the Dolphins to win playoff games against these powers seems more difficult than what the Bengals accomplished last year.

No. 3: The Vikings are receiving little praise and fanfare for their 6-1 start. But they can certainly compete with and beat the Eagles, Cowboys, Giants, 49ers, and others in the NFC. Kirk Cousins' primetime numbers are amusing, but as a team, these aren't Mike Zimmer's Vikings. And tight end T.J. Hockenson is the perfect addition to Minnesota's passing attack.

No. 4: Giants general manager Joe Schoen didn't dismiss the possibility of a reunion with Odell Beckham Jr., after failing to add a receiver at the deadline. New York's receiving corps is the weakest position group of any team with a winning record in the league. They failed to make a deal, leaving Beckham as the perfectly imperfect solution to their problem.

No. 5: Zach Wilson looked like a young quarterback with a lot to learn in the Jets' disappointing loss to the Patriots last weekend. But, the argument that they should bench him -- as the team in win-now mode -- is ridiculous. They invested a second-overall pick in him, and he's barely played enough games to label him a true bust. They must live with the mistakes and properly coach him up, moving forward. 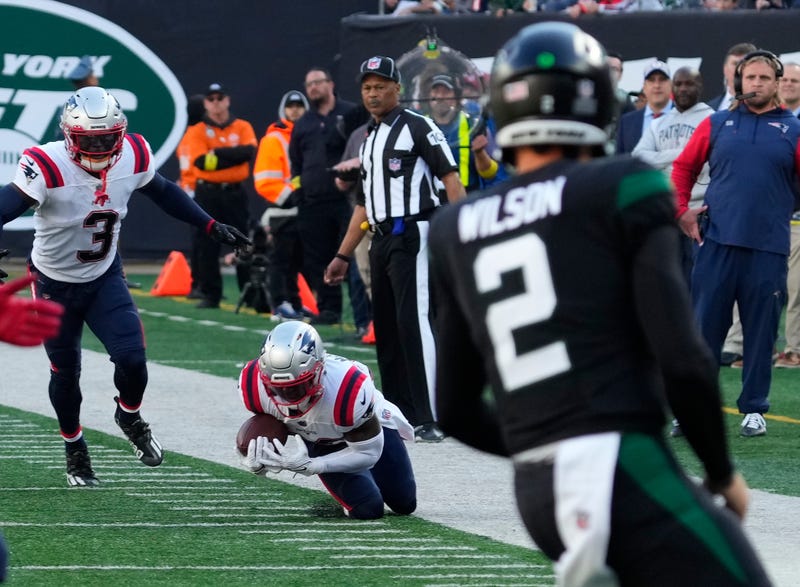 No. 6: The Texans can't do themselves any favors by toying with players, and they toyed with wide receiver Brandin Cooks, who hopped on Twitter to voice his displeasure with the team after they came close to trading him on Tuesday. This franchise feels like a dysfunctional mess, in purgatory, with no way out in the immediate future.

No. 7: The 49ers' massive trade for Christian McCaffrey already seems worth it, and that's the understatement of this column. The fact that Kyle Shanahan, in just his second game with McCaffrey, already has him throwing touchdown passes tells you all you need to know.

No. 8: Sean McVay showed his warts as a head coach by keeping an injured Cooper Kupp on the field late in a blowout loss against San Francisco. McVay is a brilliant offensive mind for the Rams. But, he's a players coach. He's been helped by Los Angeles' smart spending, and the decision he made with Kupp could've been a crippling blow. Fortunately, Kupp's ankle injury seems minor.

No. 9: Taylor Heinicke is officially better than Carson Wentz as a player. I can't help but wonder if the Commanders would have six wins if he'd been starting since Week 1. Washington's revived its campaign in a wide-open conference, and if Heinicke navigates this roster back to nine wins, he should remain the starting quarterback in 2023.

No. 10: Ja'Marr Chase's absence is an enormous loss for the Bengals. As we witnessed on Monday, the Bengals' offensive line issues still remain. And the best way to alleviate that problem was having Chase available, with his insane chemistry with star quarterback Joe Burrow. Cincinnati currently feels like the latest Super Bowl loser to fall short of expectations the following year. 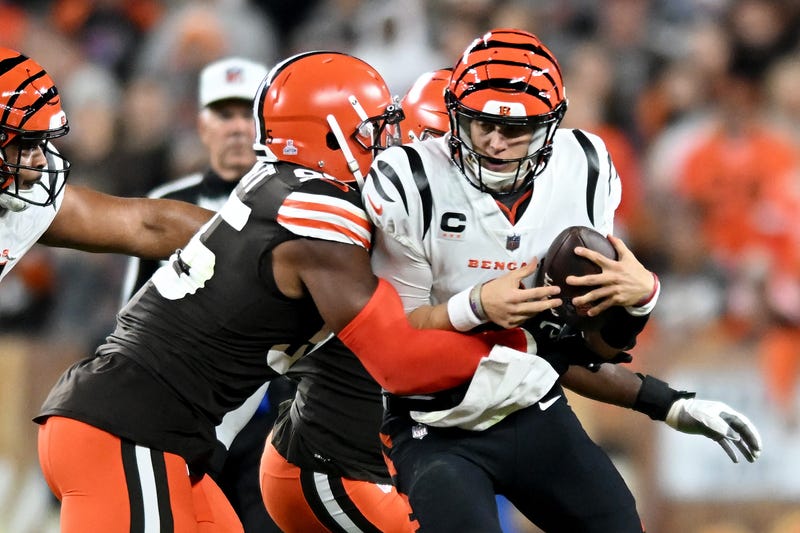 Chargers at Falcons: The first-place Falcons will host the underachieving Chargers in a game featuring two (yes, two) playoff teams? The Chargers are playing very much like Phillip Rivers' old bunch, which fell into that 'You have no idea what you're getting each week' category. This would be the Falcons' most defining win of the season to date if they pull this off at home.

Bills at Jets: The Jets had a chance to really make this the most interesting matchup of Week 9. But now, it feels like they're playing a different sport than Buffalo. This is a huge opportunity for the Jets' defense to prove they're elite. If Wilson can hold onto the ball and make a few plays, maybe, just maybe, we get a close game in the Meadowlands.

Titans at Chiefs: The Titans have won five straight games to get to 5-2, the same record as the Chiefs. Ryan Tannehill's injury put Tennessee in a situation where they had to win a game with rookie Malik Willis throwing only 55 yards. That can't happen on the road, in primetime, against Kansas City. Can Derrick Henry once again carry the Titans to an upset win? Maybe. But their passing game needs to be somewhat existent.

Vikings at Commanders: The Commanders are back in the 2022 season after three straight wins. Sure, it wasn't pretty. They needed a miracle to beat the Colts. But a win at home against the red-hot Vikings would truly plant the flag that Washington's playoff dreams are alive and well. These Vikings at 7-1 would look like a first half of dreams, too.

Rams at Buccaneers: When the schedule came out, this slate looked very weak. However, the NFL was banking on this late-window game resembling a legit NFC title game preview. Instead, they get two extremely underwhelming teams, and the loser of this game will start to feel the pressure of being more irrelevant by Thanksgiving. With his divorce official, can Tom Brady breathe a sigh of relief and focus on football for one Sunday? May be too much to ask. 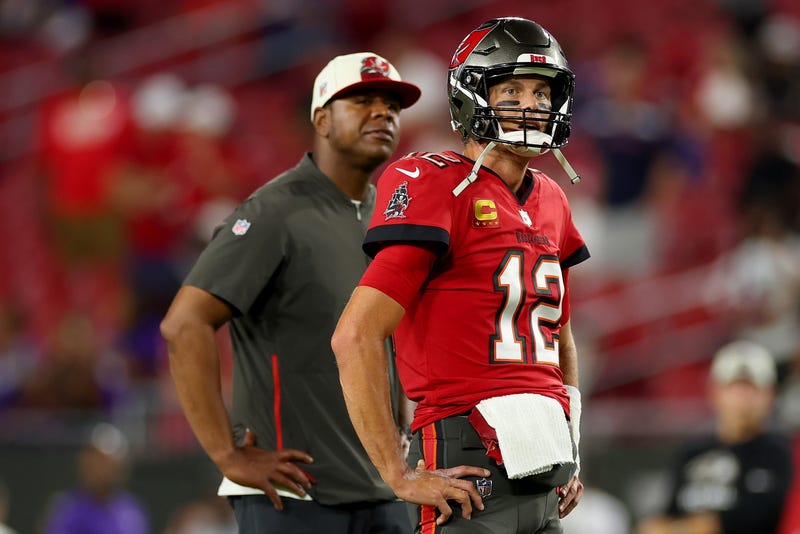 Dolphins (-5) at Bears: The Dolphins loaded up during the trade deadline, and oddly enough, the Bears were a buyer, too. Miami's roster, compared to Chicago's, is the biggest discrepancy, on paper, for any matchup this week. And all I need is for the more-talented squad to win this game by a little less than a touchdown. Roquan Smith and Robert Quinn are no longer defensive stars in Chicago, which means Miami's offense should score at will to cover.

Patriots (-5.5) vs. Colts: Sam Ehlinger's offense didn't really scream points for Indianapolis a week ago. And we've seen what Bill Belichick can gameplan against young, inexperienced quarterbacks. Mistakes will happen. This is why the Patriots -- despite their undermanned roster -- remain in the playoff hunts and tally just enough wins. This, like the Dolphins game, is a cautious number. But a 20-13 win gives you the cover regardless.

Rams (+2.5) at Bucs: This is the lone underdog I'm willing to back in Week 9, and maybe I'll learn to stop betting the Rams at some point. But is anyone confident in a Tampa turnaround at this point? They've now lost Shaq Barrett for the season, which lessens my concerns about the Rams folding under a big pass rush. This game will be tight -- it's two teams fighting for their lives. But give me the reigning champs, getting points to make just enough plays, to potentially win outright. I'll fully admit it: there've been eight games I liked better than this one. This is how tricky I think Week 9 really is. But the money is going from my pocket to the Rams.

Everything Bagel Pigs in a Blanket. I can hear the moans and groans of Andrew Bogusch on Friday already. "I mean, you're giving us pigs in a blanket with some seasoning." Not everything needs to be Tuna Tar-Tar on a Sunday. This is as simple as it gets, but adds an extra taste twist. "Everything but the Bagel" seasoning has taken the world by storm in recent years. You should be able to find it at a store near you, or in a gourmet market. So pick your favorite Pillsbury Crescent dough, get yourself some little wieners, and wrap them like classic pigs in a blanket. Dust them with the seasoning, bake until completed. I'd recommend a honey mustard, as opposed to a ketchup or regular mustard.

We strive to be a platform where varying opinions may be voiced and heard. The views, thoughts, and opinions expressed by the author(s) of this article and/or by those providing comments are theirs alone, and do not represent those of Audacy, Inc. We are not responsible for any damages or losses arising from this article and/or any comment(s).
Featured Image Photo Credit: Ronald Martinez / Staff / Getty Images