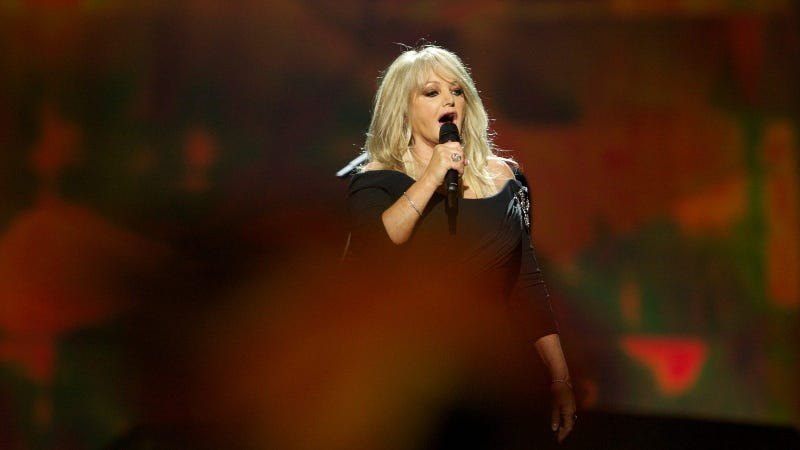 Bonnie came to hang out and talk about her new album The Best Is Yet To Come, which is available now on her website.

The future is bright ✨ 'The Best Is Yet To Come' is out now: https://t.co/nInZzIlbU1 pic.twitter.com/plsTCqcWKs

“Once we've all had the vaccination, the best IS yet to come,” Tyler exclaimed when Glenn mentioned the consistent theme of positivity throughout the album.

Glenn then started diving in to a couple of specific songs on Tyler’s new album, starting out with "I’m Only Guilty (Of Loving You)" and the cover of 10cc’s "I’m Not In Love."

“'I’m Only Guilty (Of Loving You),' oh my god, that song is so soulful and so beautiful…”’ she said fondly. “And yes, I do a cover of 10cc… but with a completely different twist to it.”

Continuing to talk about the songs on her album, Glenn brings up the flute part on "Stuck To My Guns," performed by Leo Rojas, and how much he enjoyed it. He even called the song “The workings of a new female anthem”.

“I was at the Vatican of all places,” Tyler started, “...I had an audience with Pope Francis… he [Leo Rojas] played the pan pipe in the show I sung… and after it I said ‘Oh my god, Leo, I just recorded a song called "Stuck To My Guns"… would you come and play on the record?’”

Rojas, for good reason, was “over the moon” to be able to play on the record. Tyler continued, “I was so thrilled that he made a guest appearance there.”

Moving on to "Dreams Are Not Enough," Glenn mentioned that it might be his favorite song on the whole album.

“I’ve gotta give credit to the amazing musicians that played on the album, David Mackay… that I worked with on my very first album…” Tyler said enthusiastically of her old colleague. “It’s an absolute joy working with him.”

"Catch The Wind" by Donovan, which Glenn pointed out was one of his favorite songs of all time, was covered on the album, which posed the question “why that song?”

Tyler’s answer was simple: “I just thought ‘I loved that song’ and I loved Donovan… and it is a song that I never heard anyone else cover, which is important.”

Tik Tok has been a new venture that Tyler has started, Glenn mentioned after the conversation about the album. On the app you have the chance to duet with the Total Eclipse of the Heart artist. “I do two different versions,” Tyler explained. “I do one where I just sing... ‘Turn Around’ and they can sing the verse with me… or there is another version where they sing the ‘Turn Around’ and I sing the verses.”

Listen to the full interview with Bonnie Tyler above and check out her brand new album The Best Is Yet To Come on her website.