If ever there were a time to bring back the animated series Celebrity Deathmatch, 2020 would be primed and ready.

With celebrities and musicians speaking their minds about the upcoming election, the role of government in general, social justice issues, whether to mask or not mask during a pandemic -- there seems to be more than ample fodder for a Battle Royale the likes of which have never been seen before.

Adding fuel to the already blazing dumpster fire of 2020, we have two incredibly outspoken rockers, Ted Nugent and Tommy Lee, to thank for the latest round of viral vitriol.

Relating a story to the Blunt Force Truth podcast, the Nuge described a recent backstage altercation he had with the producers of "Red Rocker" Sammy Hagar's AXS TV show Rock & Roll Road Trip.

"The producers wouldn't let (Hagar) near me, even though he and I go way back — we're dear friends," Nugent said. "They thought I was dangerous, that I'd come out with a machine gun or I'd slaughter an innocent fawn on television. This is stupidity!"

Then, Nugent invoked the name of Mötley Crüe drummer Lee.

"I said, 'So, your producers were afraid of me, but they did a show with Tommy Lee, who's a convicted felon, domestic violence heroin addict. They're okay with this guy, but not with the Ted Nugent Kamp for Kids charity, teaching kids to be clean and sober?' I said, 'Sammy, coldcock those sons of b****es and get out and let's do the show.’ So, finally, they dangerously acquiesced."

Lee, not one to let a slight go unnoticed, replied with a couple of zingers aimed at Nugent's age, as well as his affinity for firearms.

Twitter users were quick to respond, some offering words of encouragement to Lee, while others backed Nugent with quite a bit of ferocity.

Ted Nugent? Who dat? That pile of dust hasn’t been relevant for decades.

@TedNugent would destroy you in pretty much anything you wanted to challenge him in. Unless it's STDs as you are the king of those

This all may be moot, as Lee admitted he may be taking a trip out of the "Land of the Free" if President Donald Trump comes out the winner on November 3... a prospect which will surely delight Uncle Ted and his legion of fans. 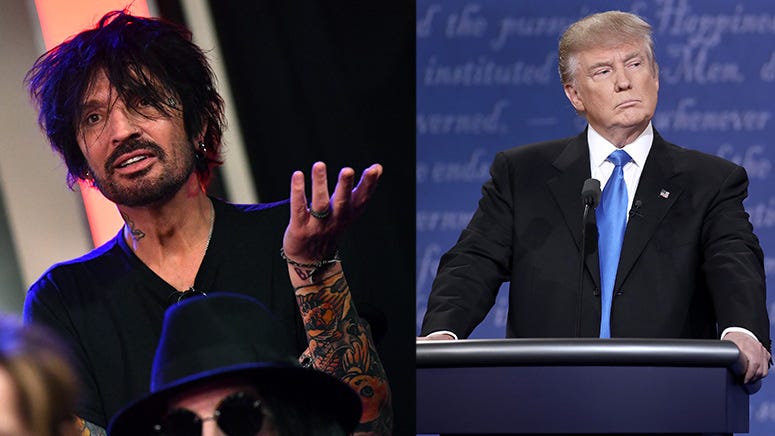 music
Addison Rae is 'single' despite Twitter meltdown from ex Bryce Hall
news
3 shot, 1 fatally at New York Stop & Shop; police identify person of interest
sports
Ryan Fitzpatrick sent Alex Smith a text after his injury that made him feel like 'biggest a–—– ever'
music
2021 MTV Movie & TV Awards: See the nominees
music
The top 5 requested songs for Redman and Method Man's 4/20 VERZUZ
news
US lists 80% of countries as 'Do not travel' in new advisories