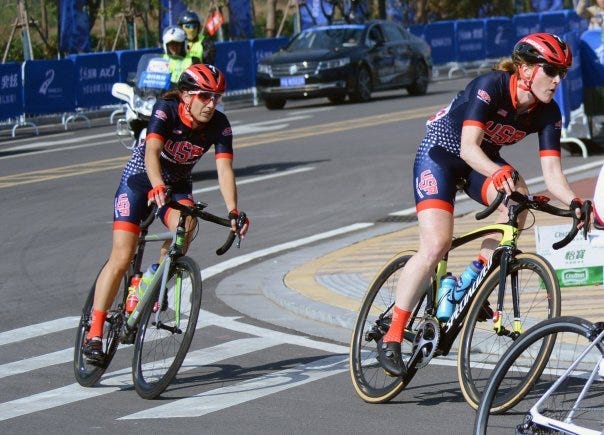 Sgt. 1st Class Maatje Benassi heard her helmet crack and break as she hit the pavement.

"My first reaction was, 'I couldn't breathe,' I just had to catch my breath, but it wouldn't come," she said. The road race took place around Wuhan's East Lake in China. Several kilometers from the finish line, the turns got even tighter than usual.

"There was a lot of movement going on. It got really sketchy," Benassi said after the event. That was when she spotted another competitor coming up behind her. The cyclist’s front tire made contact with her rear tire, which was what caused her to wipe out so close to the finish line.

Benassi is a NCO at the 312th Observer-Controller-Trainer unit at Fort Meade, Maryland. Observer-Controllers, known more often as OCs, provide military units with guidance and feedback during training exercises and help to generate after action reviews to help improve performance. This year, Benassi and her team mates for the race — Lt. Col. Shannon Gaffney, Cdr. Kathleen Giles, and Lt. Col. Melissa Tallent — were competing in the International Military Sports Council. Known by its initials in French, "The International Military Sports Council (CISM) is one of the largest multidisciplinary organizations in the world. CISM organize various sporting events for the armed forces of its 140 member countries and is one of the global sports organizations in which the largest number of disciplines is represented," according to its mission statement.

Despite the crash, Benassi declined medical attention and got back up on her bike demonstrating grit and determination as she completed the race.

"I was in a lot of pain, and my bike was rubbing too...Nothing went smooth, but I said, forget it, I'm just going to finish," she said afterwards. Benassi came in last, but her team still managed to place 8th overall in the race.

Reach Jack Murphy: jack@connectingvets.com or @JackMurphyRGR
Want to get more connected to the stories and resources Connecting Vets has to offer? Click here to sign up for our weekly newsletter.