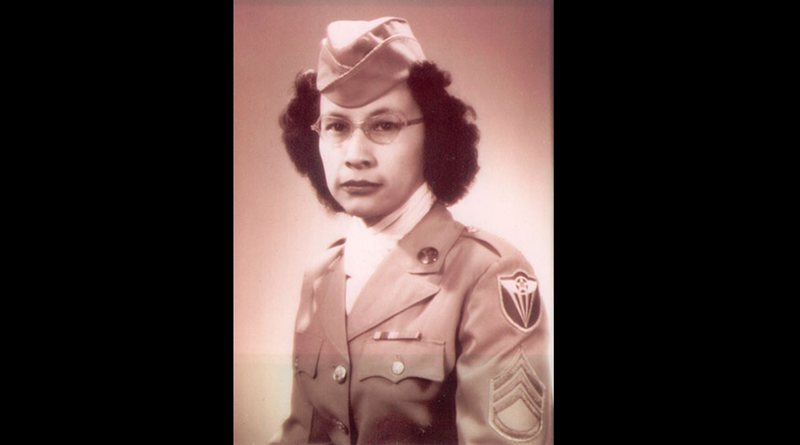 Julia Kabance isn’t sure about her new residence. At 108 (109 in August, she says), she had been living independently in her home in St. Marys until about a month ago. There she was still pretty active, doing calisthenics and walking to stay healthy.

A problem with her leg affected her mobility, so she recently needed to move to a nursing home in Wamego. It’s nice, but it’s not home, she said; though she has a few of her things with her, the room still has a bit of that institutional feel. But Kabance was never one for self-pity.

Coming from someone who remembers World War I, lived through the Depression and served in World War II, that’s no platitude.

Kabance is the oldest member of the Prairie Band Potawatomi Nation and one of a handful of remaining Native American veterans from World War II. There’s a reasonable chance she’s the oldest person in the county, if not the state. (The government doesn’t keep records on its oldest citizens, so it’s hard to know for sure.)

She told the Manhattan Mercury she’d like to live to at least 112 to have a shot at the national and international titles.

“I’d like to beat those women who were 114 — they both died,” she said while smiling, but clearly not joking.

Except for deafness she incurred during World War II, she said her health is quite good. And her memory is excellent, it’s clear as she shared her recollections from her time in the service.

She had gone to school at Haskell Indian Nations University (then called Haskell Institute) and attended the University of Kansas for a semester but didn’t have enough money to continue. A sense of duty led her to sign up for the Women’s Army Corps.

She went to a recruiting office in Kansas City, and officials put her and 24 other young women on a train to Fort Des Moines.

“They don’t treat you like ladies,” she said of the trip. “They treat you like soldiers. Where we stayed, it had been stables, and they put up bunk beds for us to sleep in.”

They were sent to Fort Leavenworth to take over office jobs so that the men who had been doing them could leave to fight overseas. The men didn’t like the women for that reason.

“They said, ’We were just pulled in. We had no choice. You just walk in because you wanted to be here,” she recalled. “They rubbed it in all the time. I told them, ‘Well, there is such a thing as patriotism.’ I said, ‘The country’s at war.’ I said, ‘Everybody needs to help.’”

She said a sergeant major in the unit once told her they liked to hire girls. He told her, “I can get more work out of one WAC than three lazy GIs.”

Kabance spent 33 months in the Army, doing clerical work and for a time, serving as a driver until an officer realized there was just one woman among the drivers and decided that could be dangerous for Kabance to be alone around so many men.

She considered making a career of the military, but Kabance felt she ought to return home to take care of her mother.

Kabance had been the 11th of 12 children. She had two sisters, one of whom was married, but she felt the responsibility would fall to her. She cared for her mother for four years until her mother died.

After that she went back to work, first for the Air Force in Topeka until the base closed. She went back to school for accounting and worked mostly for military installations. Her work took her to Washington state and on the East Coast.

Kabance also spent a lot of time volunteering with the VA and with the Catholic Church. Kabance said her faith is very important to her.

Kabance grew up on a farm on the reservation near Holton. Her father, Frank, was a successful farmer and rancher, she said.

“Most Indians at that time had to go to the association to get permission to farm their land,” she said. “My father said, ‘I’m not going to do that. It’s my land.’”

One of her earliest memories is of her family getting its first car when she was 3 years old.

“They didn’t have self-starters then, they had to hand-crank it,” she said. “Just about the time they got it started, it went ‘Bang!’ and backfired. I wanted to jump out!”

She recalls going to town and the cars scaring horses and mules, too.

She said what she remembers of World War I as the rationing, especially of meat.

Looking at her long life, Kabance said she’s not sure she has any secrets for longevity. She said part of it may have been her independence. Because she never married, “I could do whatever I wanted,” she said.