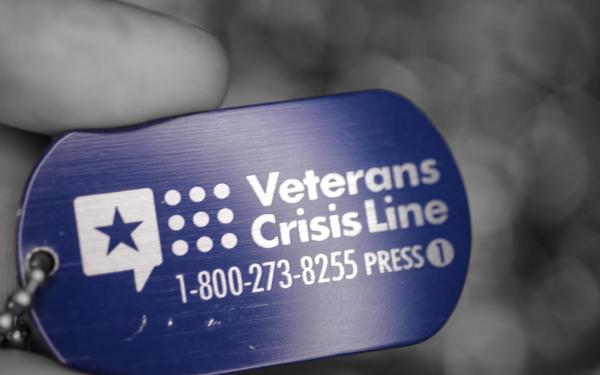 One-third of Wounded Warriors say they thought about suicide within the last two weeks, a statistic Wounded Warrior Project staff said is “staggering.”

Nearly 36,000 members of WWP responded to the veteran service organization's annual survey, now in its 10th year. One of the questions asked if members had thoughts that they would be better off dead or hurting themselves in some way in the last two weeks.

“No one cares,” one veteran in the survey said. “I feel like a number, not a person. My service dog needs me. I need to be my old self, but he is dead.”

“The only reason I am still alive and force myself to keep going is because I do not want to hurt my loved ones just because I am too weak to cope,” another veteran said. “I believe suicide is extremely selfish if a person has people that love and depend on them.”

The number of Wounded Warriors who said they were considering harming themselves came as a shock to WWP.

“I think it’s a staggering number,” WWP Director of Metrics Dr. Melanie Mousseau said of the number of Wounded Warriors who said they were considering harming themselves. “When you look at a third of the population within the last two weeks have thoughts of self-harm or suicide. I think at face value that is a surprising number.”

The survey results aren't representative of the entire veteran community, but they show many of the struggles and some of the achievements of veterans ill or injured since Sept. 11, 2001.

Mosseau also noted that the veterans who said they had thoughts of self-harm in the survey are not too different from other veterans or even civilians with similar health concerns, such as post-traumatic stress disorder, clinical depression and traumatic brain injuries.

The number of veteran suicides isn't budging, and in some cases, is worsening. A VA report released last month showed that the rate of veteran suicide rose slightly, with a rate still at about 20 deaths per day.

Mousseau said the high rate of thoughts of suicide or self-harm is likely connected to severe mental injuries nearly all Wounded Warriors (90.9 percent) say they experienced during their service. Of those, almost all say they have more than one mental injury.

The most common severe mental injuries survey respondents said they suffer from are:

A cycle of distress

The WWP survey data emphasizes the strong connection between mental and physical health -- how inseparable the two are, how they inform each other and how veterans, including the population of post-9/11 wounded, injured and ill veterans who make up WWP, are affected.

Sleep problems, for example, Mousseau said, can be caused by chronic pain from injuries or illness, which in turn can exacerbate anxiety, depression or PTSD symptoms, creating a cycle of discomfort and distress that can dramatically affect quality of life, including ability to get and keep a job, family issues and others.

The most common severe physical injuries include:

More than a third (39.2 percent) of Wounded Warriors said they had a traumatic brain injury.

This was the first year WWP included a question about toxic exposures. More than 70 percent said they had been exposed, and many cited health problems from that exposure. But only about 9 percent have gotten care at VA for those issues, as Connecting Vets previously reported.

It's not just combat or deployment-related injuries and health concerns that worsen veterans' quality of life.

The WWP survey, along with other surveys of veterans, continues to show that most veterans are obese, another complicating factor that can lead to poor health or exacerbate mental health concerns. Nutrition is among top concerns for veterans transitioning, the survey shows, with one veteran saying "the most challenging aspect of transitioning back to civilian life is the food" and another saying he or she becomes "overwhelmed by simple tasks" such as what to wear, scheduling appointments, answering the phone or cooking.

It's a combination of physical and mental struggles that can drag down a veteran's quality of life, the survey showed.

“The most challenging thing I face is dealing with PTSD, anxiety and depression,” another veteran said in the survey. "So many of the other challenges -- finances, job success, family relations, alcohol abuse -- stem from these issues.”

Mental health issues continue to grow at an “alarming rate” while nearly a third of Wounded Warriors also report struggling to get the mental health care they need.

Not only did veterans in the survey provide accounts of being assailed from all sides by illness, injury, mental health concerns, financial problems, job instability, homelessness, relationship problems and more -- about a third (31.8 percent) said they struggled to get help, put off getting that care, or didn't get the care they needed.
The leading reasons for struggling to get care included:

Most of those surveyed got their care from VA, while others sought help with a fellow veteran and others got help from prescription medication.

WWP staff said they’re hopeful that their survey shows more and more veterans are seeking care. More than half of survey-takers (52 percent) said they visited a professional to get help with stress, emotional, alcohol, drug or family problems in the last three months.

Overall, much of the information in the survey has remained steady compared to previous years, WWP said. Demographics have changed slightly, with increases in the number of women and people of color, and some health concerns increasing as the population ages. The average age of a WWP member is now 42.

WWP said it plans to use the results of its survey to inform the programming and aid it offers its members to combat issues such as suicide, financial strain and transition.

"We'll drill down deeper into (the survey data) and use that information to help our Warriors, plan programming for them and set our priorities," Mousseau told Connecting Vets. "I think our members recognize that this data is used to promote real change ... From a broad view, we're hopeful that more Warriors are seeking help ... and we want to be one of those resources to help provide it and improve the lives of our members."

For more information, the survey results will be available online today at 1 p.m. at AnnualWarriorSurvey.com.