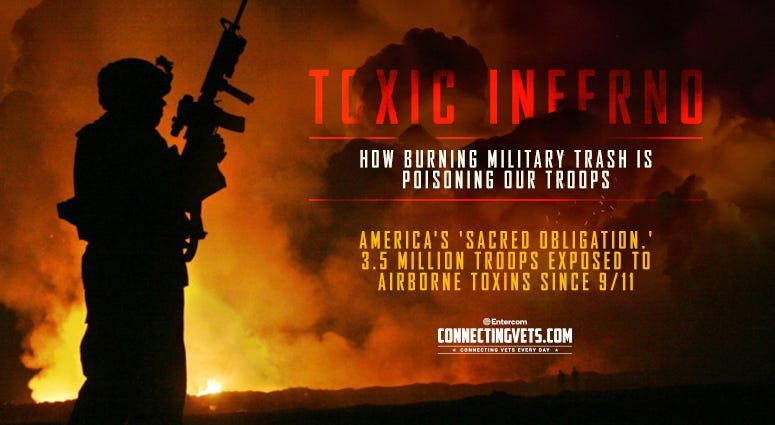 This is the fourth installment in the Connecting Vets Toxic Inferno series.

“We need to meet that obligation,” the retired four-star said last year.

At a first-of-its-kind hearing last summer, Rep. Brian Mast, R-Fla., an Afghanistan veteran and former explosive ordnance disposal specialist said “the chemical attacks we really needed to fear were coming from within our own camps.”

Congress’ progress to meet that sacred obligation so far includes nearly two dozen separate pieces of legislation as of September 2019 to address the issues of burn pits and toxic exposures to varying degrees -- few of which have passed out of either chamber. But a comprehensive bill likely won’t appear until next year.

Except it wasn’t just average trash that made its way into the smoking pits: toxic chemicals, paint, batteries, computer equipment, chem lights, medical and human waste, plastic, metal cans, munitions and other unexploded ordnance, petroleum and lubricant products, rubber, wood, discarded food -- anything that could burn, did burn, doused with fuel.

Many forward operating bases in Iraq, Afghanistan and other countries American troops have been deployed to were equipped with incinerators, which could have cut down on the toxins released into the air as greasy black smoke. But veterans and surviving families say they were rarely if ever used.

So the burn pits kept burning -- and at least nine continue to this day in Syria, Afghanistan and Egypt -- creating more pollution than the incinerators, producing carbon monoxide and dioxin, the same chemicals responsible for health concerns associated with Agent Orange, a powerful herbicide often associated with its use during the Vietnam War.

Now, service members and veterans are dying at young ages of rare, aggressive and recurring cancers, suffering from fertility and other health concerns.

Because of military toxic exposures, including burn pits, as many as 3.5 million service members and veterans are eligible to add themselves to toxic exposure registries. 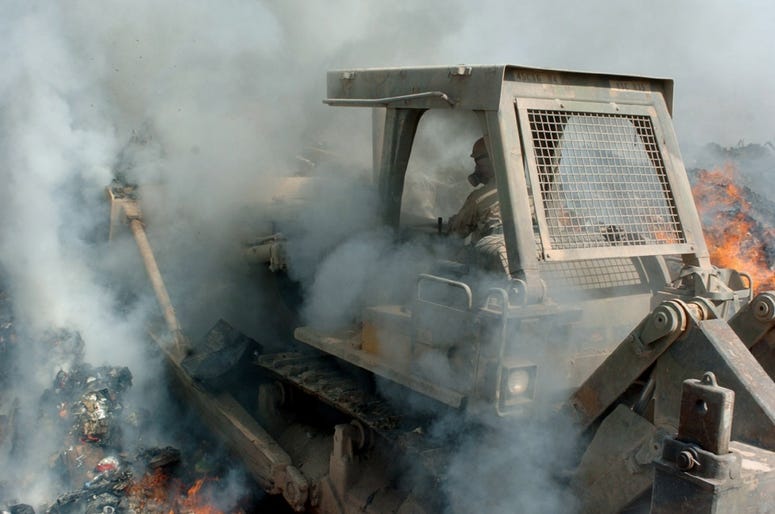 While the VA and Defense Department say burn pits can contribute to short-term health issues, both say there is no research linking the exposure to long-term illness.

In the last 13 years, veterans have filed nearly 13,000 claims related to burn pits, according to VA. Of those, about 2,000 have been approved.

“VA encourages all veterans who feel their military service has affected their health to submit a claim, which will be adjudicated using the latest scientific and medical evidence available,” VA spokeswoman Susan Carter told Connecting Vets. “VA has granted service connection for various ailments associated with burn pits and does so on an individual, case-by-case basis after review of a veteran’s case.”

Research into the long term health effects of burn pits on veterans is still in its infancy -- a daily struggle for advocates full of stories of veterans and families in pain. Anecdotal evidence, testimony from a few doctors and some research have begun to connect the dots, advocates say. And more research is ongoing. But so far, for VA and DoD, it’s not enough.

Last year, advocates won a victory, though, when a judge ruled that open-air burn pits are connected to respiratory disease.

In April, the National Academies of Sciences, Engineering and Medicine announced a review of the respiratory effects of burn pits on U.S. service members who served in Southwest Asia. The 21-month review plans to examine burn pit-related hazards and examine possible connected health concerns such as cancer, bronchial asthma and chronic bronchitis.

Data from the National Cancer Institute also shows that veterans are twice as likely as non-veterans to have lung cancer -- due primarily to higher smoking rates and exposure to known and suspected carcinogens during service. 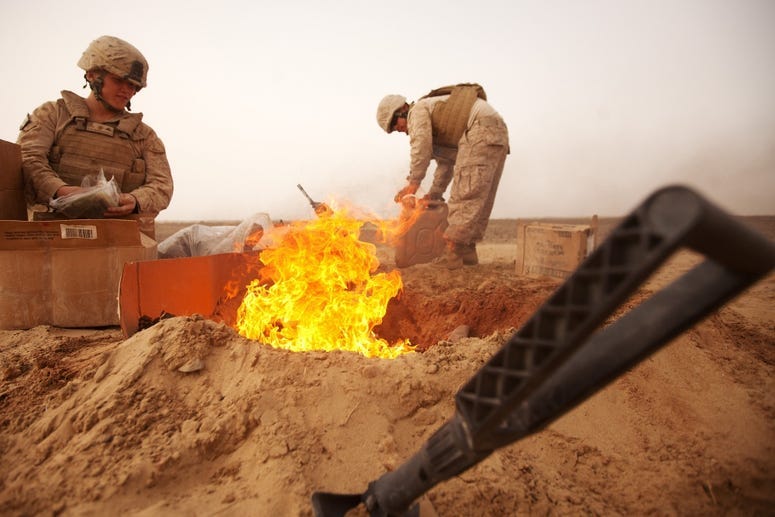 ‘Time is of the essence’

While veterans, advocates and officials wait for the results of pending research, members of Congress have stepped in and introduced legislation to get the ball rolling on behalf of veterans service organizations pushing for change.

The bill calls for research on illnesses that could be related to toxic exposure and directs VA to designate them as presumptive conditions for VA health care and disability benefits. Bilirakis introduced a similar bill last year, but it failed to advance.

Bilirakis told Connecting Vets he wasn’t sure exactly why the bill stalled, but felt it may have been the cost associated -- easily in the billions -- to potentially grant benefits to so many veterans.

“We can’t wait,” he said. “What happened with Agent Orange, as far as I’m considered, is not going to happen again.

“It’s no coincidence that these heroes are getting sick due to the toxic waste that they’re breathing. But we want to prove it to the VA, members of Congress and the administration. I know we’re going to get something done. It’s a top priority of ours. We’re not going to let up.”

Bilirakis plans to approach the White House about an executive order to help veterans affected by burn pits and other toxic exposures “so that they can get the care right away, because it’s not fair,” he said. “It’s just inexcusable. Time is of the essence.”

Some progress is being made, but slowly.

In March, the House unanimously voted to expand and improve burn pits exposure data -- the Burn Pit Registry Enhancement Act -- which requires tracking of the cause of death for veterans on the VA’s burn pits registry. Ruiz introduced the bill, which has yet to receive a Senate vote.

The bill was created in honor of Jennifer Kepner, who died at 39 from cancer her doctors said was connected to burn pit exposure. Kepner served in the Air Force and was deployed to Iraq in 2006, where she was exposed to burn pits full of human waste, Styrofoam and other carcinogens. She died after a yearlong battle with pancreatic cancer.

Another bill that stalled last year and aims to help veterans exposed to toxins, the Burn Pits Accountability Act, passed the Senate in July but has yet to move out of committee in the House. That legislation requires the Defense Department to examine service members for toxic exposure during routine checkups and calls for more burn pits research.

In a broader move, Congress included calls for additional research into burn pits exposure in the House and Senate versions of the annual defense spending bill this summer. Both chambers are expected to work on a compromise bill to pass by year’s end, and the burn pits amendments must survive that compromise to move forward. 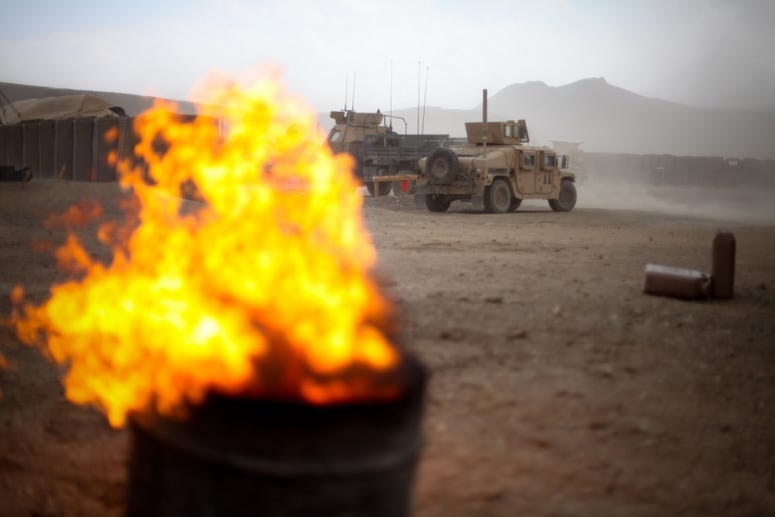 Where Congress has so far failed to make substantive progress, VSOs are stepping in.

A group of more than a dozen veterans service organizations, research and advocacy groups have formed the Toxic Exposures in the American Military Coalition. They are working on what they hope will be a largely comprehensive, omnibus bill to address toxic exposure and burn pits, which they feel is a “looming health crisis,” said Derek Fronabarger, Wounded Warrior Government Affairs director.

“If you flood too many priorities out there, too many organizations pushing for different things, it all gets lost,” Fronabarger told Connecting Vets. “The coalition will try to push one comprehensive piece of legislation with everybody’s top priority and go as a group to the Hill and say ‘This is what we want, this is what’s important and this is what we’re hearing’ and be that united front.”

“For too long, the dangerous impacts of toxic exposures have been understudied and unaccounted for among our veterans and service members,” Butler said.

The Pentagon so far has “failed” to track burn pit or airborne toxic exposures, according to IAVA, including irritant gases, high levels of fine dust, heavy metals and other toxins.

“We need to increase awareness by Congress of the widespread problem and convince them to act,” Lindsay Rodman, IAVA director of communications and legal strategy, told Connecting Vets.

While working on a united front through the coalition, individual VSOs are also pushing existing legislation to get veterans help as soon as possible.

"Our country and government must demonstrate greater accountability for the consequences of toxic exposure,” AMVETS Chief Advocacy Officer Sherman Gillums Jr. told Connecting Vets.“The U.S. service members and veterans didn’t put conditions on their willingness to fight for our freedom. Nor should our government in its obligation to care for those who fought not just a human enemy, but also an environmental one. Except the latter’s insidious attack on their bodies, in the form of neurological disorders, rare forms of cancer, and lung diseases would last long after the guns fell silent."

The VFW is urging Congress to pass the Veterans’ Right to Breathe Act, which would establish presumptive disability compensation benefits for veterans who served in areas where burn pits were used and now have pulmonary health conditions related to that exposure, VFW National Legislative Service Director Carlos Fuentes told Connecting Vets. VFW is also asking Congress to improve how the Defense Department tracks, treats and prevents the effects of burn pits and fund independent research.

Veterans Affairs leadership in Congress touted their efforts to further legislation to address toxic exposure. When asked what was slowing the process to legislate change, however, lawmakers’ staff either did not respond or told Connecting Vets any bills referred to the Veterans Affairs committees in the House and Senate must pass through the regular legislative process.

Senate Veterans Affairs Committee Chairman Sen. Johnny Isakson, R-Ga., said in a statement to Connecting Vets that his committee plans to hold a hearing Sept. 25 to discuss toxic exposures’ effects on veteran health, and review the VA’s process for identifying illnesses related to such health hazards.

“I look forward to working with my colleagues to find bipartisan solutions for our veterans,” he said.

Staff of Rep. Mark Takano, D-Calif., said the chairman of the House Veterans Affairs Committee is working to find common ground on toxic exposure and “make sure that it doesn’t take 40-plus years like it did for Blue Water Navy veterans to get the benefits they earned and deserve.”

"Now, more than ever, we need to focus our support on the post-9/11 war veterans who have been suffering from the debilitating effects of the massive toxic burn pits they were exposed to during service overseas," Stewart said in the nearly two-minute-long video. "The effects have been horrific."

For more on toxic exposure legislation in Congress, click here. 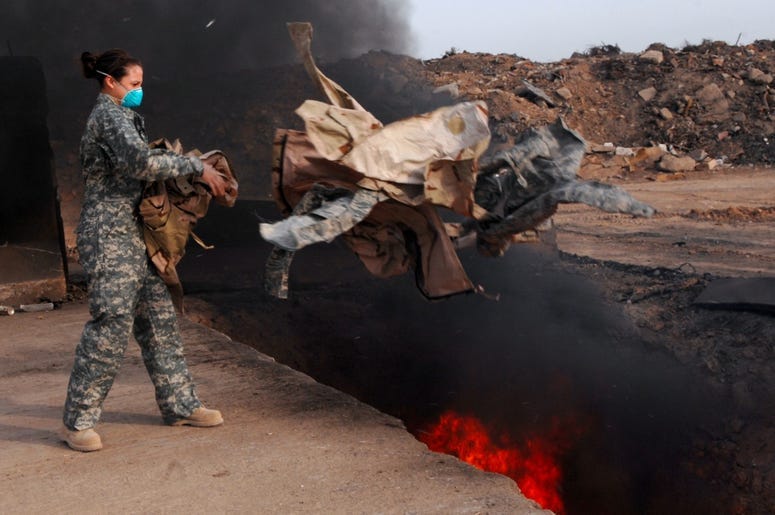