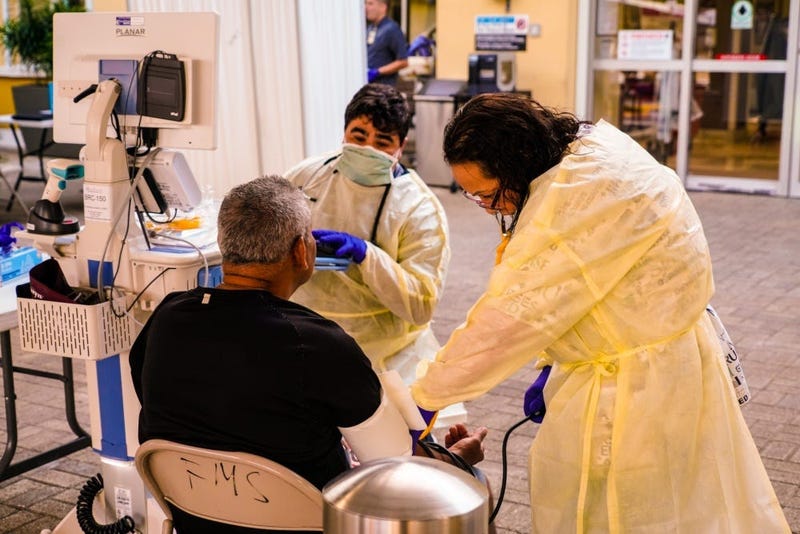 In a nationwide study of more than a quarter of a million veterans, Department of Veterans Affairs researchers determined that Black and Hispanic veterans are twice as likely to test positive for the coronavirus as white veterans.

"There is accumulating evidence that racial and ethnic minority communities in the U.S. are experiencing a disproportionate burden of COVID-19," researchers wrote in their report. The findings of the VA study "suggest a substantial excess burden of COVID-19 infection in U.S. minority communities" that is "not entirely explained by underlying medical conditions or where they live or receive care."

Studies so far have focused primarily on those who tested positive ort were hospitalized, rather than analysis of all patients tested. VA's study examined the racial and ethnic disparities in testing as well as in positive test results. Researchers said they believe this was the first study to investigate racial and ethnic disparities in testing patterns, or who received testing as well as who tested positive.

Researchers said they accounted and adjusted their results for other demographics including where veterans lived (urban or rural), geographic region, location of care, pre-existing conditions, outbreak patterns and more.

Of the veterans researchers reviewed, the study found that:

"Understanding what is driving these disparities is vital so that state- and local-level strategies can be tailored to curb the disproportionate epidemics in racial and ethnic minority communities," researchers wrote, admitting that they were unable to "explore likely social determinants of the pronounced differential burden of COVID-19 among minority individuals."

Researchers said there is an "urgent need to proactively tailor strategies to contain and prevent further outbreaks in racial and ethnic minority communities."

As of mid-July, 34% of veterans who tested positive at VA were Black and 13% were Hispanic, according to department data provided to Connecting Vets. About 46% of positive tests were white and 7% were "some other race or unknown."

If those percentages remain about the same since mid-July, as of Friday, VA had more than 16,550 Black veterans and more than 6,300 Hispanic veterans who tested positive for the virus.

But not all veterans qualify for or receive care at VA. Black veterans represent about 12% of the overall veteran population and about 7% are Hispanic, compared to 77% white veterans and 4%  other.

VA Press Secretary Christina Noel confirmed to Connecting Vets this week that the "survivability" of veterans tested and treated for the coronavirus at VA "does not differ by race."

"We're using this data to guide our public safety outreach efforts to veterans across the country," Noel said.

In May, VA officials warned that Black and Hispanic veterans could be at higher risk for COVID-19, though the department refused to share the data it based that warning on. Officials said the data was not "statistically significant" enough to share publicly.

VA still is not publicly releasing a breakdown of its COVID-19 cases by race, despite requests from lawmakers in Congress and journalists. Its public-facing data shows overall cases, convalescent cases, active cases, deaths and cases by location, but does not provide any demographic data on those cases, recoveries or deaths.

An internal VA email from the Office of Health Equity obtained by Connecting Vets previously showed that a high proportion of positive COVID-19 tests administered by VA were among black and Hispanic veterans. The email said VA was working to reduce that disparity and seeking further outreach to veterans to get them tested and under care sooner if needed.

"Long-standing systemic health and social inequities have put some members of racial and ethnic minority groups at increased risk of getting COVID-19 or experiencing severe illness, regardless of age," according to the CDC. "History shows that severe illness and death rates tend to be higher for racial and ethnic minority populations during public health emergencies than for other populations."

The VA study released this week included a total of more than 5.8 million veterans, 254,595 who tested positive for the virus. Of the total veterans included, 91% were men, 74% were white, 19% were Black and 7% were Hispanic.

The research was conducted by Drs. Rentsch, Kidwai-Khan, Tate, King, Skanderson, Hauser, Taddei and Justice of the Connecticut VA Healthcare System, Dr. Holodniy of the Palo Alto VA, Dr. Crothers of the Puget Sound VA and Dr. Freiberg of the Tennessee Valley VA.

VA officials were tracking 59,529 total COVID-19 cases as of Friday. Of those, 3,148 were considered active cases and 53,046 were "convalescent," either recovering at home or 14-days since they tested positive.

At least 3,335 VA patients have died of the virus since March, an about 5.6% death rate, which has dropped from about 8% earlier in the pandemic. VA's death rate remains significantly higher than the overall American mortality rate of less than 3%, according to the most recent CDC data.

VA officials did not elaborate on what outreach they are performing to address the disparities in COVID-19 cases among Black and Hispanic veterans.