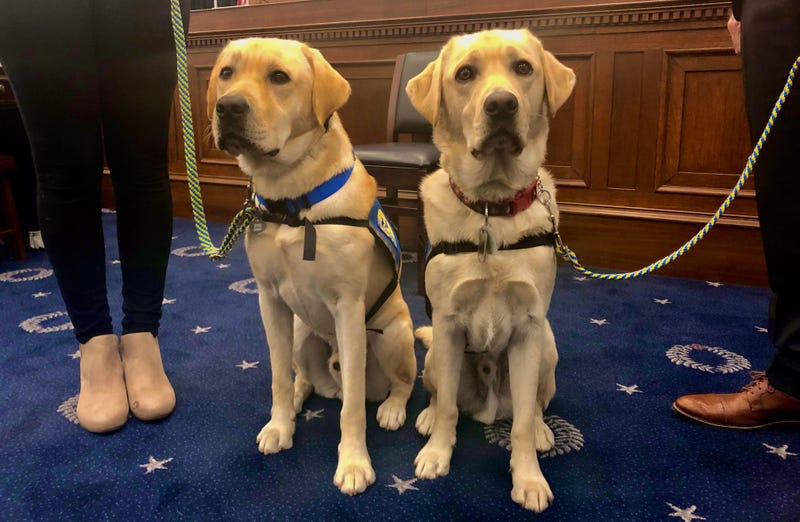 When Marine Col. Bruce Pitman has a nightmare, he tosses and turns, loses sleep and often wakes his wife.

After a 34-year military career and multiple combat deployments, nightmares caused by Pitman’s post-traumatic stress disorder are not uncommon.

But for the past year, Pitman has had some special help.

When Wembley senses Pitman is having a nightmare, he can tug off the covers, nudge a hand or -- as is the case for Pitman -- jump fully onto the bed and lick his handler’s face until he’s awake and free from the nightmare.

“I don’t even know the nightmare is happening most of the time,” Pitman told Connecting Vets. “I just know that he’s there and he’s trying to make it better. He will fly onto the bed and land on my chest and lick my face. It’s highly effective.” 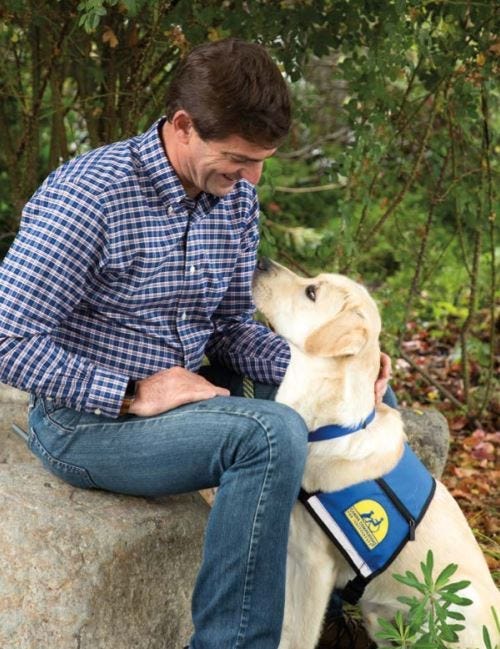 Wembley was trained by Canine Companions for Independence (CCI), a nonprofit started in 1975 initially to provide assistance dogs to people with physical disabilities.

In 2007, CCI began working to meet the increasing needs of veterans with physical disabilities. About four years ago, the group was chosen for a multi-year VA study to train and place dogs with veterans with PTSD.

After a lengthy application and interview process, which included letters from his primary care doctor and mental health professionals, Pitman was accepted to the highly selective CCI program for veterans.

He spent weeks learning how to be Wembley’s handler, and ensuring Wembley was the right partner for him. Wembley and Pitman were among the first graduating class of the CCI pilot program for veterans and PTSD-trained dogs.

“He’s changed so much for me,” he said. “I would not go out in public. I’d avoid it at all costs. It wasn’t always anxiety for me. I was angry all the time. I’d ruin family events if they were in public. It was a sort of Jekyll and Hyde situation. I wouldn’t go anywhere on my own. Now I have that independence back.” 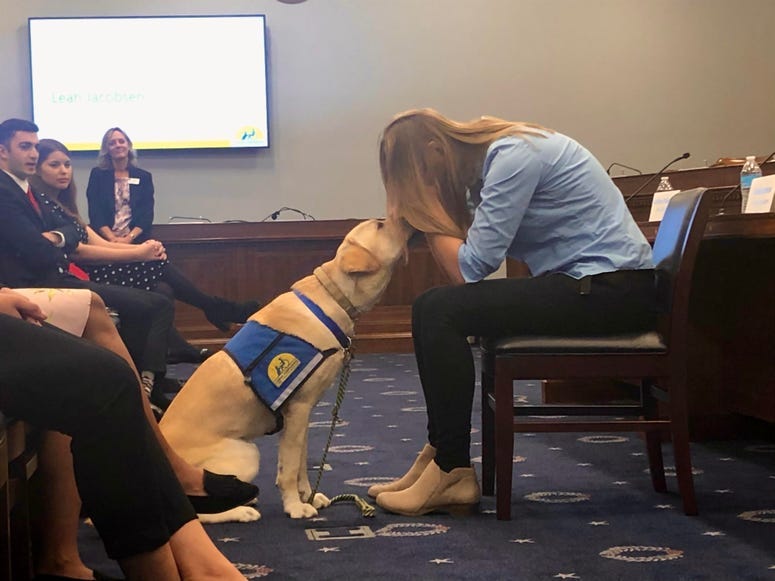 Wembley and dogs like him know dozens of commands, but Pitman said he was surprised how much the simplest commands make the biggest difference for both his PTSD and his physical needs.

“I live with chronic pain and fibromyalgia,” he said. “Some days I can see my feet, but I can’t get anywhere near them. He can pick up anything I drop, reach things that would be a struggle for me. When I first thought of getting a service dog, that was low on my list of priorities. But it’s a huge quality of life difference. He’s always quick to respond and he truly loves doing it.”

Wembley knows basic commands for physical assistance including retrieving, carrying, turning on light switches, opening doors and other basic tasks. But he is also specially trained to help Pitman with his PTSD, anxiety and, of course, nightmares.

Wembley is especially helpful to Pitman in public, where he, like many other veterans, can struggle most.

“It was hard because sometimes I would feel everybody was a threat,” he said. “But having Wembley there, it’s like getting your driver’s license for the first time. You suddenly have freedom to be independent and normal.”

Wembley literally has his back.

By dropping his hand behind him, Pitman signals Wembley to stand at his back, leaning against him and creating a buffer. He also follows commands to stand, sit or lay at any spot surrounding Pitman.

“I use that a lot in public,” Pitman told Connecting Vets, with Wembley dozing at his feet. “It really helps create that space you sometimes need, especially with PTSD.”

Wembley, like other dogs trained in the program, also responds to physical cues of anxiety or distress, placing his head in Pitman’s lap or standing on his hind legs to place the entire front half of his body in his lap -- creating a distraction and a sense of security and comfort. If Pitman puts his head in his hands, Wembley is quick to respond, nudging his hands in an attempt to redirect attention.

On Tuesday, CCI previewed new technology it’s partnering on to make nightmare interruption by their dogs even better. Still in development, but set for testing later this year is the “Whistle” technology, using a wearable device on the dog’s collar equipped with software and a smartphone app linking it to a heart monitor worn by the veteran. The device gently vibrates when the veteran is having a nightmare, waking the dog and alerting them to help.

CCI has a 450-person waitlist, CEO Paige Mazzoni said. The organization selectively breeds its dogs for health, longevity and trainability, which means the process is often long and costly. The investment in each dog is $50,000 or more, she told Connecting Vets.

About 55 percent of CCI’s dogs end up as successful service dogs, partnered with veterans and others. The other 45 percent become therapy dogs or pets.

All the dogs who go on to graduate as service dogs are held to Assistance Dogs International standards and are tested annually. There is no federal or state standard for service dogs, which Mazzoni and other CCI leaders said is a struggle for the group and other service dog organizations.

That lack of consistency or unilateral standard makes life more difficult for veterans with service animals.

Pitman and Wembley have been on about 11 flights in the past year, with airlines varying in service animal requirements from nothing at all to having to scan veterinary records 48 hours ahead of a flight, their travel plans pending last-minute approval.

The Department of Veterans Affairs also currently does not recognize service dogs for PTSD. A bill introduced earlier this year aims to change that.

In the end, Pitman said the issues he faces are not unique to him, and like many other veterans, he wants to be treated as a normal person -- not defined by his veteran status, or his need for a service dog.

“I love it when I get up on an airplane or at a restaurant and someone says ‘I didn’t even know there was a dog here,’” he said. “I don’t want to draw attention and he’s so good at his job that he’s practically invisible at times. That lets me just live my life normally and not be singled out.”

At home, when his working vest is off, Pitman said Wembley is just part of the family. But when he needs him, Wembley is always there.

“This last year has just been amazing,” Pitman said, emotion in his voice. “I really couldn’t have done it without him.”

From breeds to registries, here's everything you need to know about service dogs.

'We were finally complete’: Mission K9 reunited this Marine with his dog and changed his life. 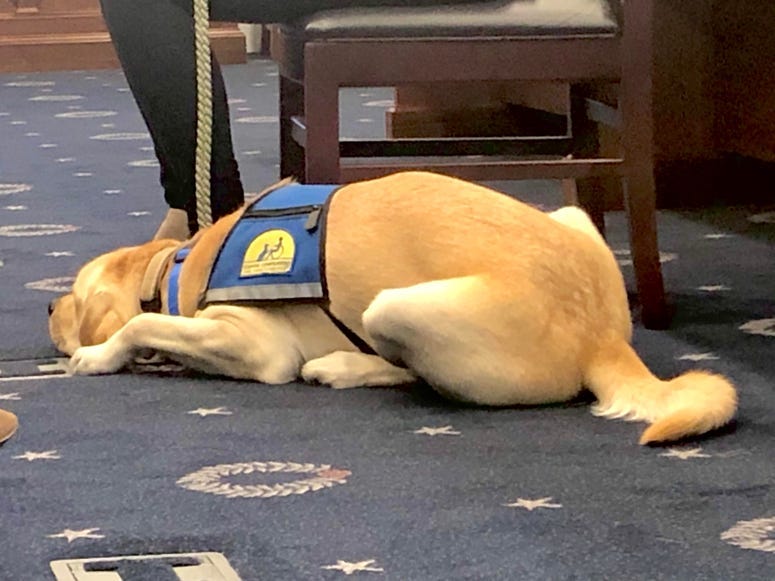