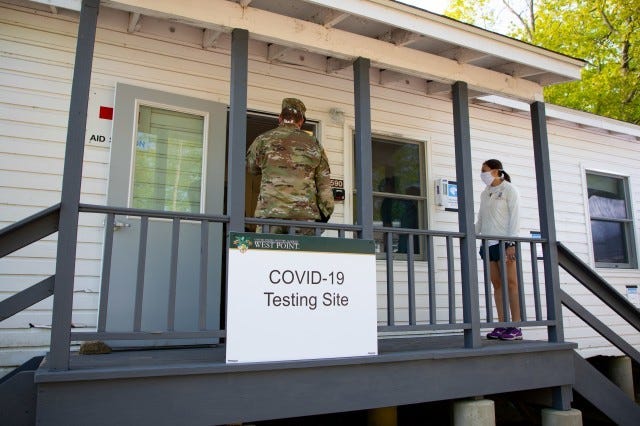 Throughout Tuesday morning, white buses pulled up outside the theater at Camp Buckner, opened their doors and let out a few masked passengers.

Carrying yellow bags with hand sanitizer and masks, the members of the U.S. Military Academy’s Class of 2020 stood six feet apart as they were briefed about the procedures they had to follow at Camp Buckner while waiting for a COVID-19 test and then their test results.

A movie played in the theater as the members of the class sat in designated seats that allowed them to stay socially distanced. Those waiting to be tested sat on one side of the room while those awaiting results sat across the aisle.

Each step of the process, from the cadets’ arrivals at the transportation motor pool to the briefings they received at Camp Buckner was the result of a nearly two-month planning process aimed at solving the problem of how to bring back the members of the class—who were spread throughout the country—in the middle of a pandemic.

The reception, staging, onward movement and integration process for the members of the Class of 2020 went from a plan on paper to a reality Tuesday morning when the first cadets started arriving back at the academy.

The more than 1,100 cadets in the class will continue to arrive over the course of five days. Tuesday’s cohort was the smallest of the five days as 88 cadets on the 3rd Regiment, 4th Regiment and Brigade staffs returned to West Point.

“I was really excited to wake up this morning to come out here,” Lt. Col. George Mitroka, who oversaw the RSOI process, said. “I showed up to entry control point one and actually saw one of my lieutenants who’s on regiment staff get dropped off. To see the whole thing come to fruition was really fulfilling.”

For some of the cadets arriving Tuesday, the return trip was as easy as driving an hour from their homes in New York City and Connecticut. For others, it meant flying from California or Alabama into Newark, New Jersey. Each cadet’s travel was coordinated by West Point and roughly 60% of the class is driving back while 40% are flying.

“The airports were pretty empty,” said Christopher Gouin, the 3rd Regiment honor representative, who traveled from Alabama. “It was pretty disconcerting to see it, but the airlines were actually handling themselves very responsibly and maintaining social distance on the airplane.”

The returning cadets went through initial medical screenings at the transportation motor pool before being bused over to Camp Buckner to be tested. Before being allowed onto West Point’s main campus, each of the returning cadets was given a COVID-19 test by a medical professional from Keller Army Community Hospital, which is on post at West Point. A negative test allowed them to enter the barracks along with their cohort, while a positive test required them to be placed in isolation.

“The test wasn’t bad,” Gouin said. “It made me tear up a little bit and I think he might have pulled some brain matter out with it. But other than that, I think I’m good to go.”

The members of the class will graduate June 13 in a modified ceremony on the Plain, instead of the traditional location in Michie Stadium. They will spend the next two weeks between their arrival and graduation week quarantined in cohorts while going through the out-processing that must occur before they can leave the academy and begin their Army careers. That includes cleaning out their rooms in the barracks, closing accounts, undergoing final medical screenings and more.

“I think it’s very special and important, just personally, because these are people that I have spent the last life changing years with,” said Hannah Beuchner, the 4th Regiment environmental officer, of the chance to still have a graduation ceremony. “These two weeks, we’re definitely going to make the most of it—at least with the people that we are around—and appreciate everyone’s presence. After graduation, who knows when we’ll see each other next.”