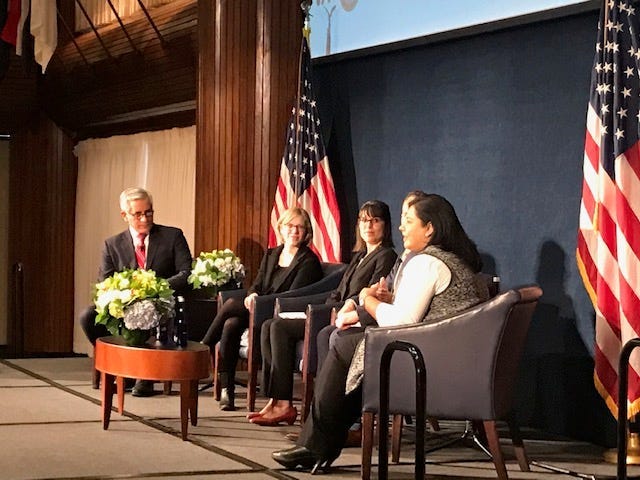 Staffers at Veterans Affairs medical centers will soon be asking patients who have caregivers if they would like to also have them at their appointment.

A simple question, it is one that is often not asked. It is now a central part of Friday’s launch of the Campaign for Inclusive Care’s training academy at The National Press Club in Washington, D.C.

The campaign is a joint initiative between the VA and Elizabeth Dole Foundation and is sponsored by USAA.  Doctors, nurses and social workers will be trained at three regional VA departments on ways to provide caregivers with a bigger voice on their veterans’ care team.

Lisa Pape, deputy chief patient care services officer for the VA, said VA staff sees veteran patients for an hour or two at most, during appointments while caregivers see the veteran 24/7.

“The caregiver brings to the table a picture we can’t see and we can’t know,” she said.

The initiative includes inviting caregivers to appointments, asking for their input and making sure their information is on their veterans’ medical records.

Pape said the initiative will be rolled out to the rest of the VA system later this year and will gradually be included in care plans over the next two years.

“We can’t successfully engage the veteran in care and help them lead their best, most independent quality of life without that caregiver,” said Matt Brown, VISN 10 Caregiver Support Program Lead, VA Healthcare System.

Dole said the vision behind the campaign is simple but groundbreaking.

“We want to include the doctors, nurses, social workers and other front line medical personnel across the entire VA health system with the latest strategy for integrating caregivers into their veterans’ medical team,’ she said.

“This campaign is a response to a call for help from caregivers across generations,” said Dole. “Let’s educate ourselves on how to empower and engage these hidden heroes. When we do, we’ll not only change the culture and the VA’s health system. We’ll create a new model for health care nationwide.”

Dole said caregivers know all, see all and help to manage it all.

“Caregivers are the first line of defense against the worst of all possible outcomes, suicide,” she added.