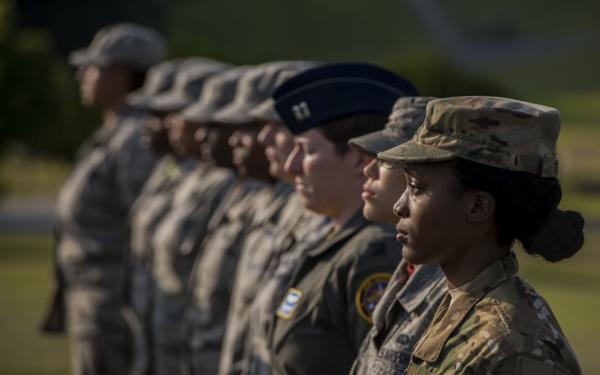 There was a time when the US military was comprised entirely of men. Eventually, that began to shift, though rather slowly. But slow change is still change, and the pace seems to be picking up. Today, women are the fastest growing segment of the military and veteran populations.

Still, despite women closing in on comprising 20% of the military, many women who served find themselves seen by some as a sort of second-class veteran according to Rosie Maury, Director of Applied Research and Analytics at Syracuse University's Institute for Veterans and Military Families (IVMF). It's a view of what, and who, a veteran is that she says is colored by the past.

"I think the typical perception that we have is a male veteran," Maury says. "And the reality is, there's a lot more female veterans out there now."

But Maury says that perception is changing rapidly, with more women vets taking high visibility positions in the community on the local and national level. She points to specific politicians like Rep. Tulsi Gabbard (D-Hawaii), and Sens. Joni Ernst (R-Iowa) and Tammy Duckworth (D-IL). Along with a more generally outspoken approach by women vets, she believes it is the reason more women are serving as leaders within the military and gaining the confidence that comes with those positions.

"A lot of them are taking that leadership role to discuss their contributions," Maury says. "...So I think their experiences while in service is leading to being vocal outside of service as well."

RELATED: Medal of Honor recipient on women in combat: ‘The standard is the standard’

As that perception shifts, Maury says it's allowing the issues women vets face to come more clearly into focus. For example, women vets are achieving post-military education success at a higher rate than their male counterparts, but aren't seeing it translate into gainful employment as quickly according to IVMF's recent research into women vets.

"Women reported taking longer to find a job, especially that first job post-military," Maury says. "It actually took women about three months longer to find that job. And so with the financial struggles and such that can lead to depression. Women are reporting higher instances of depression as well."

While Maury believes the VA, DoD, and entire veteran community are working to address such issues, she says it's clear that women vets are on the front lines of fighting for change. And she believes it's a battle they are winning.

You can hear the interview with IVMF's Rosie Maury below.