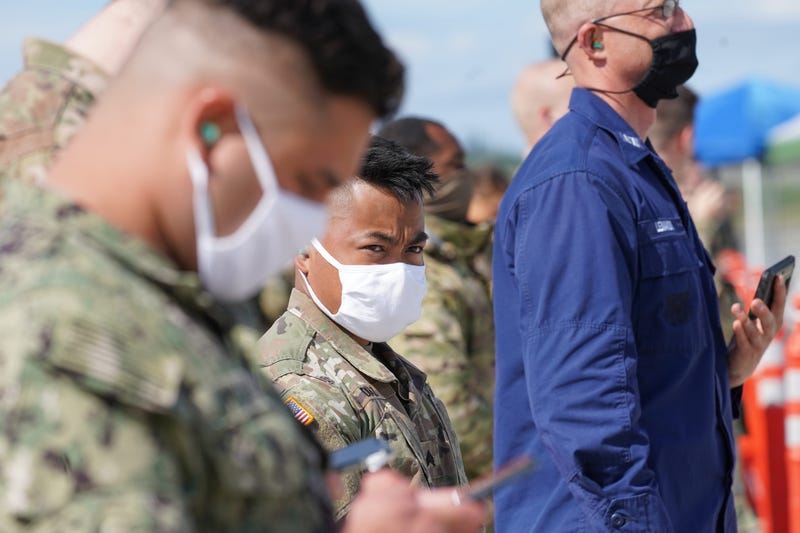 The active-duty component of every branch has seen sharp increases in COVID-19 cases this month. Military leaders are largely brushing off these increases by citing additional testing and nationwide spikes.

"We're seeing some uptick in terms of infection largely around where we're seeing that in the civilian communities," Thomas McCaffery, assistant secretary of defense for health affairs said during a press briefing at the Pentagon last week. "So in Florida and Texas and Arizona, some parts of California -- that wouldn't be a surprise."

As parts of the nation battle more significant spikes in COVID-19 than others, the United States saw an overall 16 percent increase in new COVID-19 cases in the past ten days. For the same period of time, the Department of Defense reported a 33 percent increase.

The DoD has worked continuously in recent months to increase testing capabilities. Whereas only symptomatic, high-risk individuals were tested initially, the DoD is now providing testing among pre-deployment and accession populations which has identified a significant number of asymptomatic COVID-19 cases that went undetected in the early months of the pandemic.

McCaffery is certainly correct about one thing -- the DoD is seeing a sharp increase in COVID-19 cases.

The active-duty component is largely driving the increase across the entire DoD -- although the civilian, contractor and dependent components have also seen an increase in the rate of new infections, and over the weekend an additional dependent fatality was reported.

The Air Force and the Marine Corps, both of which were able to keep COVID-19 rates relatively low, have both reported recent increases in new cases of around 40 to 50 percent. The Navy, which has battled higher rates than the other branches since the beginning of the pandemic largely due to the outbreak aboard the USS Theodore Roosevelt, reported a 25-percent increase in recent weeks. And the Army has now outpaced all other branches with 5,311 new infections since the beginning of July.

Despite these sharp increases, the DoD has not seen a significant uptick in metrics like hospitalizations or fatalities, indicating that the force is holding up well against the virus so far and threats to national security and operational capabilities are limited. However, various recruit and training pipelines across the country and across all branches continue to battle outbreaks, causing concern for future force strength.

The Air Force Academy in Colorado last week became the first of the military academies to report COVID-19 cases among its summer trainees. A Special Operations Survival, Evasion, Resistance and Escape (SERE) course at Fort Bragg in North Carolina was cut short by a COVID-19 outbreak that infected 90 out of the class's 110 participants. And questions still remain after a cohort of 640 recruits and instructors at Fort Benning in Georgia all purportedly tested negative for COVID-19 just to test 22 percent positive one week later.

All these training and recruit pipelines are implementing similar COVID-19 screening and prevention measures, typically involving multiple rounds of testing, 14-day restriction of movement and isolation periods, continuous symptom monitoring and social distancing measures where possible. And while a rash of outbreaks has indicated that these measures aren't enough to contain the virus, the military seems to have no plans to change anything.

"Our military readiness absolutely requires that we have trained and available forces to meet our national security objectives and we have made the decision to continue training in a safe and effective manner after a significant amount of analysis and guidance from our public health officials," Maj. Gen. Andrea Tullos, commander of 2nd Air Force at Keesler Air Force Base in Mississippi said during a press briefing last Thursday.

As of Monday, the Department of Defense reported 25,822 cases of COVID-19 in total. These cases include 42 fatalities.

Reach Elizabeth Howe on Twitter @ECBHowe.Want to get more connected to the stories and resources Connecting Vets has to offer? Click here to sign up for our weekly newsletter.