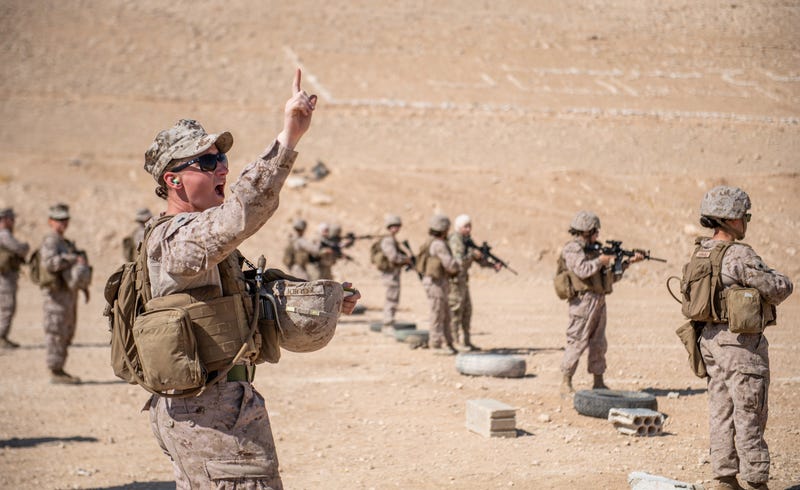 The House Armed Services hearing room on Capitol Hill is full of portraits of past leaders in gilt frames, looming larger than life.

All but one is white. None are women.

In that same room Tuesday, three lieutenant generals and one vice admiral -- none of which were women -- of four U.S. military branches told members of Congress what they are doing to recruit and retain diverse soldiers, sailors, airmen and Marines.

Congress was not fully satisfied with what they heard. And a panel of advocates that followed told an altogether different story.

The brass touted their branches accomplishments -- women and minorities who had accomplished extraordinary feats, broken ceilings and records and become "firsts." They shared statistics that showed increasing numbers of black, Hispanic, Asian and women enlisted. They detailed efforts to create inclusive marketing content and extend scholarships and assistance programs to people of color and women. Leaders focused mostly on recruiting successes rather than efforts at retention.

But Congress wanted to know not just what the armed services are doing to recruit people of color and women, but also what they're doing to keep those recruits and make sure they rise through the ranks.

Of the about 1.3 million active-duty troops:

"We want our Army to look like our nation and reflect what's best of our citizens," Army Lt. Gen. Thomas Seamands told Congress. But Rep. Jackie Speier, D-Calif., was quick to mention that demographic trends show the United States will be majority minority by 2040, and the Army is far from it.

All the branches mentioned to some degree that progress has been slow.

"We have made far too little progress far too slowly," Vice Admiral John Nowell Jr. said.

"Even with our success, there is still more to be done," Marine Lt. Gen. Michael Rocco said.

Those trends followed in most branches: there are far greater percentages of people of color and women eligible than are reflected in service demographics, and that discrepancy widens much farther among officers. When Rep. Susan Davis, D-Calif., asked what the services are doing to remove barriers to retain the diverse troops they are increasingly recruiting, the panel of military leaders had few substantive answers.

They said they were taking successful minority and women service members and using them to recruit, or making them leaders and "influencers."

While leaders cautiously congratulated themselves for progress so far, a second panel of former service members -- all women or people of color -- had a drastically different perspective.

"I faced chronic and pervasive gender discrimination and sexual harassment," she said. "The pervasive attitude among my peers was this was to be expected. Men almost universally discouraged reporting problematic behavior because doing so might ruin the perpetrator's career. Sexual assault, harassment and discrimination hurt military retention -- full stop. Leaders must value careers of talented women over those of criminal men."

Reports of harassment and assault have not dropped substantially.

"My military career was full of challenges," she said. "Some grew me in incredible ways and others were rooted in systemic failures that resulted in unjustified harms, avoidable inequities and made it largely untenable for me to serve to the best of my ability."

Campos-Palma shared with Congress that she is a survivor of multiple sexual assaults during her service, one a "homophobic retaliation" by a fellow airman "who resented I would not return their advances."

"Sexual violence, harassment and gender hostility were and remain part and parcel to military service," she said. "The feeling of being preyed upon and undermined from within made an already challenging role even harder."

Campos-Palma described a military full of processes that are "broken and biased" against women, parents, people of color and LGBTQ service members that "set us up for failure." She said the issues are pervasive, but center on "unchecked toxic leadership and the culture of impunity and lack of oversight that enables them."

Williams described having to fully gear up and walk a quarter-mile for every bathroom break on deployment, only large-size socks stocked in base shopettes and no hair conditioner, having to explain a need for birth control to regulate menstruation on deployment to providers and commanders, among other issues.

"Each of these small indignities alone is minor and easy to ignore," she said. "Cumulatively they constitute a barrier that drives down women's retention with 'death by a thousand cuts' ... that constantly remind women we are 'other.'"

The military must also root out racism if it hopes to retain its diverse recruits, said Bishop Garrison, director of national security outreach at Human Rights First.

"Eradicating white nationalism in our ranks has to be of paramount importance," he said. "It's affecting discipline of our units and recruitment and retention in our ranks."

Diversity itself is a "matter of national security," Garrison said. "A more cohesive unit is a stronger fighting force. Diversity helps overcome group-think or tunnel vision, which in war can prove fatal."