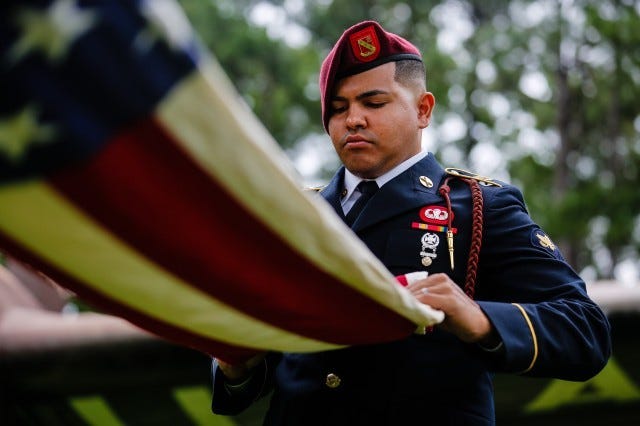 Many Americans proudly fly the U.S. flag at their homes and places of work, but what do you do with it when it's old and ratty and you're ready for a new one? Don't just throw it in the trash like any other old item — that's considered disrespectful.

Many state and county government offices and Veterans of Foreign Wars posts have flag disposal boxes outside of their buildings. Police stations also collect them. Once the disposal boxes are full, various organizations such as American Legions, VFWs and the Girl Scouts and Boy Scouts collect the flags and hold flag retirement ceremonies.

History, respect and undies: Things we should know about our flag

Rules on how to properly fly the flag were established in June 1923, when the National Flag Conference met in Washington. Its members created the Flag Code, which states that "the flag represents a living country and is itself considered a living thing."

The American Legion passed a resolution about flag retirement ceremonies in 1937, and they've been an important ritual ever since. According to the resolution, "The approved method of disposing of unserviceable flags has long been that they be destroyed by burning."

The U.S. flag is considered such a sacred symbol that burning it in an undignified manner constitutes desecration. That's why the ceremonies are held in a specific manner.

Every year on June 14, Americans celebrate Flag Day. Not surprisingly, it's considered the most appropriate day to hold flag disposal ceremonies, which are often held at night.

During an American Legion ceremony, participants stand aligned in two parallel rows about 20 feet apart, facing each other. A small fire burns beyond the rows of members, opposite the Legion commander. 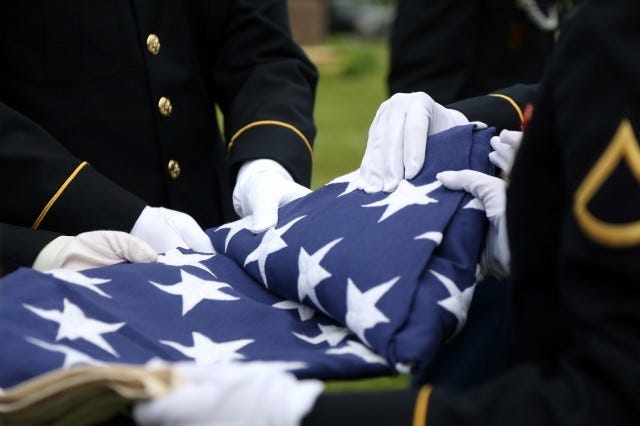 The flags that are no longer serviceable are presented to Legion commanders, who inspect them to make sure they should, in fact, be discarded. When it's agreed upon that they've reached their current worn state due to proper service of tribute, memory and love, a color guard presents the colors and a chaplain offers prayers.

As the crowd salutes, the flag detail dips the retired flags into kerosene and puts them on a rack over the fire. A bugler sounds "To the Colors."

Other methods of disposal

Flags don't always have to be disposed of with such pomp and circumstance. If you can't drop yours off with one of the aforementioned groups, you can do your own small ceremony — as long as it's still held in a dignified manner.

Vietnam veteran’s flag will fly once again, 20 years after it came down

According to the VFW, you first need to fold the flag in its customary manner.

When you start your fire, make sure it's big enough to fully burn the flag before you put the folded flag on it. Next, salute the flag and say the Pledge of Allegiance or hold a moment of silence.

Once the flag has been fully consumed, make sure to safely extinguish the fire — and of course, make sure you're conforming to local and state fire codes and ordinances before doing any of this.

Other veterans service organizations say people can also bury the folded flag in a dignified box, or recycle them — an option that's common for flags made of synthetic or nylon material that can be hazardous if burned. Some groups, including the nonprofit Stars For Our Troops, carefully cut embroidered stars out of the flags and give them to veterans with a note that reminds them that their service won't be forgotten.

Want to stay more connected to all the stories and resources Connecting Vets has to offer? Click here to sign up for our weekly newsletter.